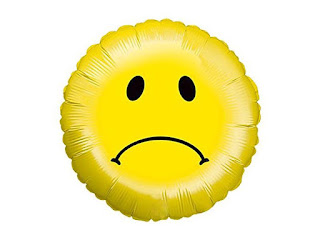 “And some certain significance lurks in all things, else all things are little worth…”

One evening this week, I was having a look at my Twitter while the dinner was evolving. As I was watching, one of my favourite tweeters said something funny and I smiled. Then, as is the way of such things, I thought of something to tweet back, a ‘reply’ as we tend to call it in the trade. So I typed my reply and got on with the dinner, which involved peeling some spuds over the bin and missing the bin with every bit of peel, one of my many life skills.

When I returned to Twitter, there was a reply to my reply. It was from the tweeter who had originally tweeted and it was short and succinct.

This caused me a little concern. I had no intention of making anybody sad with my little reply, least of all this ‘one-of-my-favourite' tweeters. I replied light-heartedly to the effect that I was sorry, that I hadn’t intended to cause any sadness with my reply and I rounded the tweet off with a little in-joke to emphasis the unimportance and silliness of the entire exchange.

Back to dinner, picking up of potato peelings, and dishes.

Later, I checked and saw there was no further reply to my reply. This was not unusual or suggestive of anything. This tweeter has a busy and full life and a twitter feed that reflects this. My reply had finished off our exchange quite acceptably. There was no need for a reply.

Silly me but, for the sake of that one sad face emoji, I was now actually troubled. I’ve been doing this tweeting thing for a long time and one thing I’ve learned is that you hardly ever know exactly what is going on with the people you are swapping your typed words with. People can be hurting or anxious or under pressure or fragile in a myriad of different ways. Sometimes you can’t tell how over-inflated a balloon is until you accidentally burst it.

And it’s kind of ironic (in a non-ironic Alanis Morissette sort of way) that it was an emoji that caused my discomfort because I think emojis were invented partly to defuse such discomfort. I believe they came about as a device to gently add some visual emotional qualification to the cold type face of text communication.

I’m not generally a big wuss but the sad face emoji is something I tend to take seriously. A happy face emoji is just a general non-event, as innocuous as a comma or a full stop. It can mean that you’re happy or amused or it can just mean that you have nothing left to say in this conversation and you are now going to leave on a relative high note. It’s fine. But, for me, a sad face emoji does not have any social or ironic alternative definition to it. For me, it means you are hurt, sad or upset. And if it’s directed at me, it means I may have been the one to have caused that hurt and I can’t entertain that.

You see, I have a thing about hurting people. No, let’s strike that. If you hurt me or my family or if I even see you randomly causing hurt, I could hurt you a bit without too much agonising about it. In fact, I am resolved to intervene in everyday situations where I see people being hurt and I know this will probably eventually result in some more blood-strewn blog post at some future point but so be it. I am no longer comfortable with being one of the bystanders. But I digress. I don’t have a thing about hurting people per se. What I do have is a thing about accidentally hurting people. This is most definitely a thing for me and, I would go so far as to say, it has become one of my defining characteristics. I hate the thought of hurting somebody unintentionally and, if I reckon I may have done so, I may go to extraordinary and even embarrassing ends to try to put that right.

This may explain why, the other evening, sometime around midnight, I was sending a private message to my twitter pal, explaining how I hadn’t intended to cause any modicum of hurt with my flippant reply. The lovely reply I got back completely defused my concern and confirmed for me that, as usual, I was just being a silly git.

But being a silly git won’t stop me from doing it all again next time. If I get wind of the fact that I may have inadvertently caused you some measure of pain, you can expect some embarrassing attempt from me to put it right.

I could explain the genesis of this aspect of my psyche to you but, don’t worry, I won’t. I know exactly where it comes from and I understand it and if you knew it you’d probably understand it too. So don’t judge me too harshly as being just a silly wuss and a sentimental fool. We may be just flesh and blood and water but our characteristics are formed in fire and are not easily re-forged.

I watched a bit of ‘The Circle’ on Channel 4 over the last few weeks. A bunch of people were sent to live in an apartment block and could only interact with each other through social media mechanisms. Text and photos primarily and, of course, emojis. The winner was the one voted most popular by their peers. The winner turned out to be a man pretending to be a woman. A completely false image. But what was telling for me was that, although the person’s image was totally false, the person himself was not. Behind the photographs and the texts and, God help us, the endless emojis, there was a real flesh and blood (and water) person, trying to do the best he could by his online friends. And that shone through.

It’s a point to bear in mind. Behind our online texts and photos and jokes and outrage and declarations, we are all just flesh and blood and water. ‘Such stuff as dreams are made on’, if you will. And through thousands of miles of physical separation and through layers and layers of the very latest technology, we can still often sense those things that are real.

We are so much more than just flesh and blood and water - there's gin in there too, I think you'll find.

You could probably count on the fingers of one hand the number of times I’ve used an emoji and I would imagine in every one of those no-more-than-five instances it would’ve been a smiley face. On the whole I’m pretty much anti-emoji and have been since the early days. In principle I actually think they’re a good idea because as much as I favour the written word I’m also acutely aware of its limitations. I’ve often wished I could incorporate directions into my texts but where do you draw the line? As a playwright you must face this issue with every line you write. Just how much additional information does an actor need to get the line right? How many actors have you heard deliver the opening phrase of the soliloquy spoken by Hamlet in the so-called nunnery scene? It’s only ten ruddy words and yet I’ve never heard two actors approach it the same way: “To be, or not to be, that is the question.” I once tried to notate a text—we’re talking forty-odd years ago—as if it was a musical score. Failed miserably but I learned a while back that I wasn’t the first to try this. Beckett once discussed the possibility with Stravinsky. I would’ve loved to have been a fly on the wall that day. But you’re right. You can’t predict how any one person will interpret what you say. And most of the time we never know. Which is probably as well. If we did realise how far and how often our words miss the mark we’d never put pen to paper—literally or metaphorically—again.

There are a lot of things in life I don’t understand. Up at the top of the list is the desire to hurt another person. I’m not saying I’ve never done it and I have, deliberately, but even when I have there’s always been something a bit half-hearted about it; I never really put my shoulder into it. And invariably on those instances where I have set out to hurt someone it’s been in response to them injuring me in some way first and it’s been a kneejerk, and never fully thought through, response; the more time I let pass the less vengeful I find I am. And it’s never satisfying. Never.

Unwittingly saying the wrong thing though, God, yes, or not thinking before I open my gob: how many times? That’s why I prefer the written word because I can go over and over what I want to say. You do realise—or maybe you don’t—that I probably never devote less than an hour to any comment on your blog. I read it over and over again to make sure what I’ve said is what I want to say. Or as near as. As near as usually has to do otherwise I’d never hit the send button.

Jim, the care you take shines out in each valued comment. I thank you.

Re play writing. I've learned to just write my lines with intent, not to state that intent, and trust the person on the other end to find that intent or failing that, fine something equally valid and doubly surprising. :)