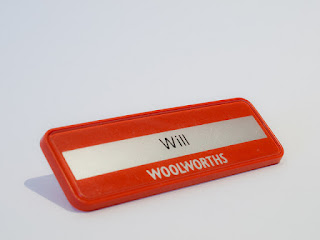 I’ve never had a phobia. All of my life, I’ve been totally phobia-free. But I think I might have one now. I’m not sure, let me explain.

But, before I do, I should just say that I don’t want to have a phobia. It’s not on my bucket-list of things to have and things to do. My writing about it now is not some attempt to cement it in my brain, to legitimise it and to authorise it. If anything, it’s my attempt to purge myself of it, to shout at it in the hope it might just go away.

I mean… who wants a phobia?

My phobia has always been a ‘thing’. I’ve written about it quite a few times, often to try to raise a smile with some silly embarrassing story told against myself.

That’s enough preamble, let’s cut to the chase. This phobia I think I might have. Actually I don’t really think I might have it, in case you’re worried or anything, I’m mostly just shooting the breeze on a Sunday morning.

That’s too much preamble now. My phobia (or not) is this; I think I’ve developed a fear of names.

I’ve never been any good with names, particularly people’s names. I’ve always struggled to recall them, sometimes to comic effect. It’s always been a ‘thing’ but has it become something more? I’m starting to wonder.

I probably won’t remember your name, if we meet. I almost certainly won’t use it, even if I do remember it, because I’d be fairly convinced I would get it wrong. Instead, I will greet you over-effusively, to emphasise the fact that I definitely know who you are even though I’m patently not using your name. I say stuff like ‘Hiya’ and ‘How’s it Going?’ and I infuse them with such intent and meaning that you might worry that I was genuinely concerned for your well being when, in truth, I’m mostly just over-compensating for my own failings.

It’s always been a ‘thing’ but why would I start to think that it’s more than a ‘thing’ now?

I know a little bit about phobias. Just a little bit, I’m not pretending to be an expert here. My eldest son had a long-standing fear of loud unexpected noises, as a child and as a teen. His worry about the potential for balloons bursting and fireworks going off kept him from parties and events for quite a few years. Then he had an excellent series of sessions of Cognitive Behaviour Therapy which we both went to together. We learned how your thoughts and actions can affect the way you feel and we learned some ways of combating those negative thoughts and actions that make things worse. Thanks to some brilliant help, we sorted the noise thing out and things have been great ever since.

Along the way, as I said, I learned a little bit about these things. I learned enough to recognise what I’ve been doing with this ‘names’ thing. I have been conditioning myself to fail. By repeatedly explaining to people how I am ‘bad with names’ I have embedded the knowledge in myself that I am indeed ‘bad with names’ and I have given myself licence to fail whenever the question of a name arises. My failure is now a foregone conclusion.

Two moments from my last week.

I was at an event and I met someone I knew quite well. I knew their name and, in a rare burst of confidence, I used their name in greeting them. I used the wrong name. I knew I had done it the moment I had done it but we were just passing each other and there was no time to repair the mistake.

Even more recently, I was sitting with a friend having a coffee and I recalled another friend who had recently died. I could not summon the friend’s name. The one who had just passed away. My mind went around and round, trying to find the name as I hopelessly tried to explain who I was talking about. It seemed beyond belief that this name was not there for me on the tip of my tongue. The person I was thinking of was there in front of me, as clear as day, smiling benevolently but still the name would not come. It only took my hearing the start of the name for me to instantly have it all but, still, to not have the name of someone so in the foreground of my life is a rather disturbing thing.

I think this latter moment, in particular, is a very good example of how I have conditioned myself to fail. If someone asks me about a name, all kinds of walls and barriers shoot up in my head. These walls are plastered with graffiti that shouts things like ‘you will not remember this name’ or ‘you are bad with names’ and I get so busy reading these walls that I have no time or energy to simply say the name.

The first moment is more an example of the kind of event that adds to my conditioning. I am actually quite bad with names but every mistake I make, every failed attempt, reinforces the writing on the walls in my brain. I beat myself up quite a bit over getting that person’s name wrong. I even Facebook-Messaged them to apologise (I think they thought I was a bit deranged).

So, yes, I am now starting to think that my ‘thing’ has grown to something a little more than just that. I have conditioned myself into an active fear of having to recall a person’s name. It's a 'First World Problem', if ever there was one, but there you go.

And, as I said at the start, I’m not sitting here typing about this 'phobia' to try to make it stronger. I’m trying to weaken it, to undermine it. I witnessed how my son’s ‘loud noise’ thing was addressed. It was called-out and faced-up-to and weakened by a combination of work and consideration. I think I have the capacity to do the same for myself. I can force myself to use any name that I know. I can push myself to attempt to use names I think I know and risk some fallout whenever I get them wrong. I think I might try.

I delight in using a person’s name. It’s a compliment I pay to people that they will never even know exists. I just think I need to do it more and I should probably get on with it and stop whinging about it here in my head.

I looked it up. There is a name for my phobia, my fear of your name.

I doubt I’ll be able to remember that.

But maybe I will.

I have a phobia. Had. Actually I’m not sure where I stand at the moment. If all the spiders suddenly vanished off the planet would arachnophobes still be arachnophobes? Fear is such a strange phenomenon. I actually think most fears are of the unknown. People aren’t so much afraid of spiders as they’re afraid of what they might do. Fun fact: apparently there are some 21 quadrillion spiders in the world. Given that the world’s population is about 7.4 billion that means the ration of spiders to humans is 2.8 million to one. Fortunately spiders are pretty private buggers and I’d doubt if I’d encountered more than a couple of hundred in my life. I’m not afraid of them but I still wouldn’t want a tarantula for a pet.

I don’t talk about my fear. In fact the only people who know about it are Carrie and my daughter. A few years back I faced it for the first time—it is amazing how good I’d got at (and the lengths I went to) to avoid that—and it was awful but I got through it and I’ll never have to go through it again. But the fear remains. Because what if all the spiders vanished off the planet in some arachnoid rapture apart from the unworthy who were left here? They’d be meanest, nastiest, most pissed off wee buggers for sure.

As for names I’m TERRIBLE with names but I’m good with faces. This is not a new condition. I’ve never been any good at remembering names, in fact I was thinking about this a couple of hours ago while I was watching an episode of The Expanse which if you haven’t seen yet I would heartily recommend. I was watching it on my own because for reasons I find hard to fathom (because it’s so good) Carrie doesn’t like it and I was thinking how I might explain to her what she;d been missing when it dawned on me I couldn’t remember a single character’s name. There’s the captain, the pilot, the guy with the beard, the black girl, the detective, the woman with the gruff voice, the gunner, the Asian dad, his daughter etc. etc. And that pretty much goes for every show even the ones I’ve been watching for years. So I know where you’re coming from. Hell for me is starting a new job and having twenty or thirty names to remember after hearing them once.