The Moment You First Miss Someone 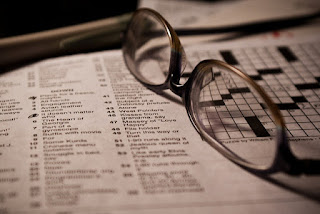 I did a few hours work in the office yesterday. No hardship. I wasn’t kicking down walls or drilling holes through concrete floors, like I used to do on my Saturdays many years ago.

I had parked the car way up on the hill because my usual parking corner was occupied by the Saturday shopping folk. As I trudged up the incline, after I’d done my hours, I checked my watch and started to look forward to something in that low-wattage, back-of-the-brain sort of a way that you don’t even know is happening until after the feeling has been subverted.

It was about that time when the guy would be out sitting on his window cill.

Every day, around this time, this guy sits out on his window cill and has a leisurely smoke and studies the crossword. If he was deep in the consideration of some cryptic clue, I wouldn't say anything to him. I wouldn’t want to break his concentration or disturb his little well-deserved break from work. But if his head was up and he was looking around him, I would always say ‘hello’ and he would always say ‘hello’ back. Not much else. Maybe an occasional observation on the weather, as is customary around these parts. Nothing more than that though. A quick hello and then pass on.

When I worked my way up the hill yesterday, at the correct time, I hadn’t done it in a month or two. Revised parking arrangements had meant that my car was now, more often than not, in that other place and the route to it didn’t take me past the guy’s shop. Perhaps that’s why I was actually looking forward to something as simple as a ‘quick’ hello and then pass on. I don’t know. It was always nice to see him there with his rollie and his folded newspaper. It was kind of reassuring or something.

But he wasn’t there. There was no sign of him. I was disappointed, in a little way.

Then, just as I walked past the place, I remembered that, of course, he wouldn’t be there. He had died, some months before. He was gone. I had known this, of course. I knew it at the time. I was sad about it and I remembered him with my friends. But I never really missed him.

Yesterday, I missed him. I never really knew him beyond that occasional ‘hello’ but yesterday I finally identified the little gap that was left in my life as a result of his no longer being around.

This isn’t meant to sound all reserved and cold-hearted. I’m just like everyone else, when someone dies I am sad and I mourn them and remember them but, for me at least, missing them is something quite different to all that. You can’t choose a moment in which to decide to miss someone At least I don’t think you can. It’s like a burglar in your head that turns up when you least expect it and kicks your coffee table over.

I remember, after Dad died, I felt all the stuff you would expect to feel. In his later years, when he was on his own, I used to phone him up every night for a chat. Nothing much, just a ‘hello’ and pass on. One evening, months after he died, I had a good story to tell and I looked forward to telling him it. I knew he’d get a laugh, maybe tell the story on, with his own embellishments. I had the phone in my hand before I remembered. I missed him then. That’s how it tends to happen, to me at least.

I didn’t mean to go on about this today. It’s just the absence of the man and his ciggie and his crossword has stayed in my head so I thought that made it worth writing it down.

There are people who are gone from my life, important people, and I don’t think I’ve even really started to miss them yet. Someday, there will be some corner of a room or some conversation where that person should be and I will turn to them to see how they are and hear what they have to say and they won’t be there.

I’ll feel it then. I’ll miss them then for sure. It’s a good thing, all in all. It reminds me I care.

it's weird how it hits you Ken. A while back I posted a school pic, the Hamlet in Ireland play, to John Finan, on facebook. We chatted for about an hour, him trying to name all in it, you & Padraig McGloin we all he got right. He mistook Karl O Boyle ,for his brother Peter, and another thing he said, brought to mind Joe Gilligan.At the time Peter had just passed away, I didn't share that then, it didn't seem the place,it struck me then that poor Joe was gone over 15 years by then too.Death seems to shadow us permanently, just when you think you've shaken him off, he pounces unexpectedly , just to cement his presence, reading your post just brought this straight to my mind, grief, sorrow & loss, hides everywhere, in favourite songs movies, books, waiting to remind you, not letting it do so is the trick I think. Take Care Ken
George H

I’ve been working on my next novel this morning. I got notes back from my first beta reader a couple of weeks back and she made some valid points not that I’m making any major changes but there were things she didn’t pick up on and so I’m stating a few things that before I only implied. The book is called Left and is all about loss. I began it after my parents died as a means of trying to understand how I dealt with my grief. The resultant book, as often happens, became its own thing but at its core it’s still asking (and struggling to answer) some very basic questions. Like, what kind of loss I felt. In the book I write:

Loss is when you miss something you once had. What I found myself missing was something else. I missed what we would never have the opportunity to have even though I knew full well neither of us would have made any real effort to move towards it.

We know loss is coming—it comes for all of us and comes back often—but what do we do about it? Mostly we bury our heads in the sand.

When someone dies we’re the one who’s left, the remainder, hence the book’s title. I thought long and hard about the nature of leftness and here’s what I came up with:

Can left exist without right? I decided it could but it wouldn’t be left anymore, it would have to be something else.

My parents died and with them my last opportunity to be a son. Technically I still am a son—we’re all someone’s son or daughter—but I’m no longer a practicing son. Sometimes I miss that.