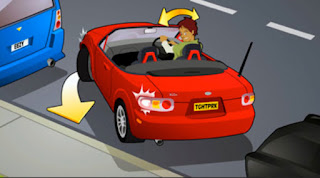 Sometimes you think you’re doing great but, from someone else’s point of view, you’re really not. That’s the little moral to this week’s tale. I thought I’d get it out of the way right at the start.

On Tuesday evening, I was driving home from work and I decided to drive up through the town. Usually, I skirt around the outside streets, cut through a car park, you know the drill.

But it was a sunny evening and there was less twists and turns to the ‘straight through the town’ route and the car window was open and, sod it, I don’t know,  I just went.

It was after six and not too busy so I trundled up the main street, taking my time. The light up ahead was green and I was going to make it easily. Then the van in front stopped and indicated that it was going to reverse into a parking space. Okay, so I wasn’t going to make the light. Who cares? No rush. I’m good.

The guy started to reverse in to the space and it was clear that the space was a little tight for his van. Do-able but not a complete cake walk. The first attempt was pretty close but not good enough. The guy pulled out and tried again. This time his line was much better. He was going to make it. Big van in small space. Nice one, dude. Kudos to you and yours.

But, just as the guy was nearly in, he stopped and made like he was going to come out again for another attempt. But he was practically in. He had a couple of feet at the back, he just couldn’t see that he had them.

I managed to catch his eye in his wing mirror before he pulled out. I waved and mimed that he should continue to reverse back and I would guide him in safely from my vantage point. He reversed in, slowly, slowly and I kept waving him in, seeing clearly that he had room to spare.

He got in, nice and neat. No problem. He waved at me and I waved at him. The sun was shining. What a good lad I was.

The a car came towards me from the other direction. Her window was down and my window was down. As she went past, I turned to her and smiled, my best winning smile.

And she called me a name.

Imagine the worst name you might call someone. Don’t imagine too hard, you probably don’t like the word. Yes, that one. And she put a verb with it, imagine the worst verb you could put with the worst word. She went there.

I was taken aback.

So she repeated the noun and the verb for clarity and then drove off.

As I drove on my way, it dawned on me what must have just happened. The lady was coming the other way, waiting for the reversing van to give her room to pass. And all she could see was me waving her on and smiling condescendingly. Waving, waving, waving, although she didn’t have enough room to fit through the gap, there was I smugly insisting she did and blithely demanding that she get on with it.

The kicker is, I didn’t even bother to look at her when I did it. I just sat there smiling and looking at the back of the van.

What a 'noun/verb combo' I must have seemed to her.

Sometimes you think you’re doing great but, from someone else’s point of view, you’re really not.

Whoops, I repeated the moral.

That’s bound to piss someone off.

I’m a nice person. I’m not boasting when I say that. I’m not saying I’m a nicer person than you—that wouldn’t be nice—but I am saying that, given a chance to be nice or nasty, I’d lump for nice every time. Actually it’s more than that: I wouldn’t know how to be nasty. I mean I’ve seen people being nasty and I’m sure I could fake it if my life depended on it but my heart wouldn’t be in it. This doesn’t mean I’m a good person and I’ve done some bad things in my life but I like to think I’ve been nice about being bad; at the very least I’ve had the decency to feel bad about being bad. But the truth is I don’t really get nasty people. I know they exist but I’m not sure why they exist. What good do they do? I’m not saying people don’t have a right to get angry—there’s a lot out there to piss off even the sweetest of the sweet—but there’s nothing added by being nasty. I have the same problem with laziness. I know there are lazy people out there but I don’t know how to be lazy. Idleness kills me. Tiredness I get but not wilful indolence. I was called indolent once and forty-odd years on it still stings. I’ve never been told not to be nasty though. I consider that an achievement, something to be proud of. I have been called names before—it’s impossible to grow up in Scotland without being called a few ****ing adjectives, verbs and nouns—but you learn very quickly not to take it to heart. Like with you that lady would’ve had no effect on me. Other than a few moments of disappointment. For her. Not that she’d care but you know how it is with us nice people.