Pasta: Point of No Return 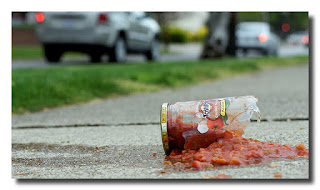 I seem to have become rather awkward of late. Ungainly, even. I knock things over, drop things, break things. Don’t leave your best crystal out when I come to call. It may end poorly.

The other evening, I left work and bought some things in the supermarket on my way to the car. Some pasta, some pasta sauce, some bread, you know the kind of thing. On the way to the car, I let the pasta sauce slip. Well, I don’t exactly know if I let it slip or not. It slipped and let that be an end to it.

I park up a little street. It’s on a hill. There are a few houses. Again, you know the kind of thing. I was nearly at my car when I felt the pasta sauce jar slip. I would normally have caught it again. I’m rather good at dropping things and catching them before they land. Mostly, though, I just remember the things I fail to catch. I didn’t fail to catch the jar, per se, I never tried to catch it. My hands were too full with all the other stuff I was carrying to even try to catch the slipping-away jar. If I had, I’d have probably dropped several other things in the attempt. Where’s the joy in that?

So the jar slipped away toward the ground, in super-slow motion, as they do, and then it smashed on the concrete and spread itself in a forensic spatter all over the pavement. I looked around. My car was only a few paces away. I could be in it in a matter of seconds. Slam the door, rev up and away unbeknownst to anyone ever.

But that’s not me. No really. I make messes and then I clear them up. That’s who I am. But this wouldn't be a story if I had cleared it up. This is a story because I couldn’t clear it up. I simply did not have the tools to do so.

Instead I did what Bruce Willis did in ‘Die Hard 2’, whatever I could.

I got a plastic bag from the boot of my car and started to pick out the shards of glass from the red mess on the footpath. I don’t know about you, but I have never managed to pick up shards of glass without cutting myself. This time was no exception. It was hard to tell where the pasta sauce ended, and the blood-letting began. After a while, I had all I could get from the mess without losing a finger so I stepped back to view my handiwork. Not so good. The ground was still a turgid display and there wasn’t much else I could do about it. The windows of the houses across the street gazed blankly down on me. I couldn’t get up the nerve to go door-to-door requesting buckets of water and/or a mop. I put my glass shard ridden bag back in the boot of my car and slunk off home.

It was due to rain that night. The rain would wash the rest of the mess away. Rain is quite good for that.

The next day, it hadn’t rained and my mess was still there when I parked up. It was more congealed now, a little dehydrated even but still there. A testament to my ungainliness and my lack of civic responsibility.

The next day, it still hadn’t rained and now I noticed that there was a security camera on the wall right above where I dropped my sauce. (If you’re just starting to read here, you’ll be confused). Great. Now I know there is somebody with a PC somewhere nearby who has footage of me picking up bits of sauce-ridden glass and hopping about and swearing when the inevitable cuts ensued. I know that, in actuality, they’ll probably never look at it. That somehow makes it all seem a bit worse.

Having typed this with no idea of a resolution or a moral in mind, I’m going to wrap it up and go and fill a couple of two litre bottles with water and drive down and wash that stain away once and for all.

These things just tend to prey on my mind. I guess that's why I started writing this in the first place. Hoping for some release. But there isn't one. Not from reflection. It requires some small action. No matter how stupid an effort it takes, it is always best for me to do rather than think.

Post Script – Mission accomplished. I didn’t get there until a few minutes ago. Sunday morning. There was nobody about. I brought the stiff yard brush and two bottles of tap water but only needed to use one. Nobody saw me. I don't think the security camera is working. The stain was dried and almost gone but I got rid of the last of it and then went to the shop and bought a Sunday paper and a baguette. The girl in the shop knew me and slipped me a copy of the magazine from yesterday’s paper too. This was entirely better than sitting at home eating Cornflakes. I feel set for the day now where I didn’t before.

Post Post Script – A hundred years from now, if somebody is thumbing through these posts and casually wondering who the hell I was, I feel there may be a significant clue in this one.

I'll provide an analogy for you, Ken. It's that, as a society, it's better to clean up after making a mess of things - to own up and take affirmative action - than to slink away and pretend it wasn't your fault, to play down the problem like it wasn't the huge mess everyone thought it was and was, in fact, the best thing for both the pavement and the residents.

Kathy at the Junk Drawer said...

You're a good man, Charlie Brown. You went a lot further than I would have! I'm guilty of dropping and breaking two glass jars in my life, both at the grocery. One I ran away from (salsa) because I was going through some anxiety at the time, the other I fessed up to (pickles).

I admire your diligence! p.s. and love this post title!

I always look forward to your posts, Ken. I wonder: What they hell is he going to have me dredge up from my past this week? Because that’s what happens; you write about something and I try to find an appropriate and relevant response. One of these days I’m going to write, “You know, Ken, there is absolutely no common ground here whatsoever” but not this week dammit. Two things come to mind, three actually, and two of them don’t involve me dropping anything. The first was when my first wife and I were getting ready to move into our Council flat. At the time we were living in a privately-rented flat and we both worked across the road. Seriously I walked out of my flat in the morning, through the underpass and that was me at work. Wonderful. On the way home one night I noticed someone had dropped a tin of paint at the entrance to the underpass. And, yes, you’re ahead of me; it turned out it’d been my wife. Unlike you, however, I left it where it was but every time I walked past I felt so guilty but even though it was gloss paint it vanished far quicker than I ever expected it to. It was in that exact location my wife managed to lose her engagement ring. In the snow. Any yet I found it. I mean it was worth about two quid but it seemed important to make the effort. I don’t remember her ever coming out with me to search for it and I’m tempted to read something into that but she was pregnant at the time and so maybe I insisted.

The third instance happened a few days ago. I stood up from my chair, went all dizzy and the next thing I knew I was steadying myself on the arm of Carrie’s chair having (apparently although I’ve no recollection of it) knocked over a full cup of coffee. I’ve been suffering from bouts of vertigo for several years now so the dizziness wasn’t anything new but this what the first time it’d got the better of me and I did not like it. I mean it passed quickly enough and once it did I helped her clean up my mess but I didn’t like it one bit. I’m not especially clumsy and I’ve got used to the dizziness and modify my behaviour accordingly but it was the not being in control that got to me.

And that’s the best I can do this week. I mean I must’ve dropped loads of things over the years but I’m damned if I can remember. I blame it on my mother. She dropped me as a baby. Okay, technically she didn’t drop me; she left me on the kitchen table and I rolled off but six of one I say.