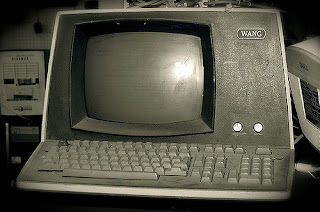 It’s been quite a day.

Some very big things have happened here in Ireland this weekend. I feel I should be writing about them, saying my piece, doing my thing.

But, these things, they’re so big and so close at hand that it’s hard to immediately get my head around them in a way that would let me write anything worthwhile about them. It’s probably best if I don’t.

So, what else happened this weekend then?

Wait, I know. We got a new laptop.  That’s what happened.

It takes a long time for things to change around here. We’ve had our old computer for so many years. But the old computer had never really been any use and it was obviously now doing much, much more harm than good, so we finally decided to get rid of it.

I’m very glad that we did.

Some people did not think it was a good idea to get rid of the old computer and get a new laptop. But the old computer was so useless that, for the longest time now, if we had to do something hard, we had to travel all the way to the office to do it. Some people perhaps thought it was better if we continued to travel to the office to do all the things we could not do on our old computer. Maybe it meant going out in the storm and maybe it messed with our head and sometimes it even made us quite sick, but it was still better than getting a new laptop.

A new laptop would open up new possibilities, you see, and not all of them completely attractive. We would be able to see things we wouldn’t otherwise see, We would have to deal with things we wouldn’t otherwise have to deal with. Wouldn’t it be better to just leave the comfortable old broken machine in place and let it do whatever it could do and, in those times when it couldn’t do anything, get on the road to the office where the necessary could always be done.

It was a thinking that prevailed for a surprisingly long time. But we thought about it and we considered it very carefully and we finally took action and now we have a new laptop to write on and to do other hard things on too. I’m sitting here now and it’s working beautifully and I’m listening to some peaceful music and it’s after midnight and I’m not really doing anything terribly important right now but I know that if I have something hard to do - something that really needs doing - I won’t have to go out in the cold and the damp to travel to an office far away to get it done. I can get it done here, in the safety and shelter of my home It still won’t be all that easy. It still won’t be without heartache. It still won’t be without pain. And, of course, I can still just choose not to do it at all and I may very well do that. But at least, if I do choose to do it, it is my choice and I can do it here in my place.

So that’s it. That’s what’s happened here in Ireland this weekend. A new laptop.

Will all that come to pass? Only time will tell.

In the meantime, I can’t help but feel proud of our new laptop and of the decision that led us to finally getting it. I feel we stood up for what we knew needed to happen and that, by doing so, we played our part in making life that little bit better.

But I think I’ll go to bed now.

It’s been quite a day.

I am so happy you got a new laptop, Ken. I've wanted to see it happen for ages.

There was a time when computers were a luxury and although they’re still not necessities (though that is the direction we’re heading in) I can’t help but have mixed feelings about the future having been born into a world and lived almost half my life (the better half?) without one. That said I am not short of computers. At the moment I’m working on a laptop in the living room but when I’ve finished writing to you I’ll make a fresh cup of coffee and move to the tablet in my armchair. Later I’ll go through the office and my PC although since I’ve finally got the home network sorted I can just as easily work on my office PC from the living room laptop which delights me no end. I’ve still not got rid, however, of my old office PC which I only use for downloads it’s so slow but it works and as long as it works it’s not doing any harm. I also have a spare laptop in the office which is also slow but I like the security of being able to swap over machines at a moment’s notice. Believe it or not I have another two laptops which need a bit of TLC. One overheats and crashes after about an hour and the other is completely inaccessible. I intend to stick one of the hard drives in a case and use for backups and the other will end up in one of Carrie’s old laptops. And don’t get me started on all my external hard drives.

I used to have a car. I haven’t driven for years now and doubt I’ll ever get behind the wheel again. Which is fine by me; I’ve never been passionate about cars. I think I’ve told you this before but when I bought my first car and the people at work asked me what kind it was I said it was “a red one” in all seriousness; I’d forgotten the make and model. When I do think about cars it’s not the freedom they bring that jumps to mind or their bird pulling power it’s the fact they break down and not infrequently. I cannot count the number of times something’s gone wrong with one of my cars which I was unable to fix myself. (I can count on the fingers of one hand the time a car’s broken down and I was able to repair it.) And the thing about cars is you never have a spare. I hated that. That was the way it was with computers at the start. They’d break down and half the time you didn’t even have access to the Internet to look up the problem. Well, sod that for a game of soldiers: I don’t run a car, I never go on holiday or smoke or drink or gamble or chase women—I can damn well afford to own more than one computer if that makes me happy. And you have no idea the relief it’s brought me. Because, at heart, I am a worrier. I don’t have a lot of faith in machines. Especially nowadays because nothing’s built to last. I wonder what the average time anyone keeps a phone these days? A year? I’ve had mine for a good twelve years and t’s going nowhere. Although, yes, I do have a spare.