If I Had a Penny 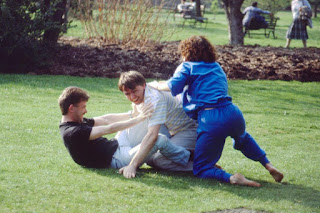 For all the complaining I’ve done about Facebook over the years (and I’ve done some complaining) it does continue to provide a very important service to me.

It keeps me in touch with some of my oldest friends.

I’ve always been more of a Twitter head, as you may know. Facebook was something I was sort of ‘dragged onto’, to take part in a campaign for Arts funding that was being run there. But I stayed and stayed, as I tend to do with things.

Twitter suited me, for some reason, but it didn’t suit everybody and so my old friends didn’t ever really show up there. But Facebook, for all its horrors, was a revelation in that respect. Old pals, who had become just a trace of fond memories and somewhat wistful thinking, were there. They were there almost in the flesh. A little older, a little more settled perhaps, but still very much the same in all the important ways. And there was their family and there were their kids and there was their dog and there was their cat. And it was like a bright window was opened into their lives, for me to peep in.

There was a reconnection, of sorts. For not only could I see them but, rather obviously, they could see me too. We exchanged ‘hello’s and ‘how are you’s and perhaps shared the occasional updated confidence but, mostly, in truth, we just saw each other again, after all the years. And how very good that was and how it remains that way to this day.

There’s MC, out on the ocean with her pals. There’s Nuala, still navigating the world like she always loved to do. There’s Brian, still making his excellent music. There’s Tim, hitting the Rugby with his pals and out sailing in the bay…

Even the friends I made more recently, on Twitter. They are there too with their lives and their families and their concerns. We are not linked by too many cords, my old Twitter pals and me. But the cords that do link us can get stretched and kinked and even a little torn up... but they don't break. They don't ever seem to do that. And that's a good and a somewhat precious thing.

To look at my old friends, and to share small moments with them, is to also think of the friends who are not there. The friends who are out there somewhere, living their own updated/same lives just not choosing to share them on some website. It evokes a hope that they are okay and that everything is going along just fine for them. That’s why Facebook is so valuable in the end. If it wasn’t there, I wouldn’t call, I wouldn’t write. I would cast myself adrift by torpor and social ineptitude. Facebook provides me with the entry level tool that I need to keep in touch.

We think of our friends and almost believe that we will all be together again some day. But we won’t. Or if we will, it will be for a fleeting moment. A changeover of trains that are going different directions. It may be a sombre thought but I think that our time in each other’s company is largely done. One or two of us will meet, from time to time, but no entire collective will assemble. Indeed, when were we ever an entire collective? Weren’t we always just a combination of personal relationships that bounced off each other and ricocheted off in so many different directions.

That is why I think it’s important, when any two meet, that we evoke the others, the absentees, in fond stories and smiles. That is the only way we will ever manage to reunite again, in each other’s  collective memories, shared whenever we may occasionally collide.

Because the years are passing quickly now. Almost as fast as the pages can be torn off a calendar. Not too soon, but still soon enough, we will slip into legend as we all must do. That is when the distant relationship changes. What is cosy and warm now may become precious then, almost at the flick of switch.

It is with that it mind that I am scribbling this down today. Here’s to you, good friends. Although I hate Facebook in many ways, I won’t ever leave while you are in there. The picture I see of you may be a rosy one. For who shares their upset stomach on Social Media? But it is still you. And your kids look great and your pets look great and I’m glad to see you looking so well.

My friends. Online and off. If I had a penny for every time I thought about them, well, I wouldn’t be very rich or anything. Or, more accurately, I would be rich only on account of the thoughts I have of them rather than from any pennies I might have earned. I’d have earned enough for one good drink, perhaps, and I would raise that glass in a toast to them.

Glad to see you there.

A while ago I went through Facebook and did a bit of a clean-up. And I think we all should from time to time. We should keep our friends—not our Facebook friends, but our true friends—and either unfriend the rest or, as I did, block their posts. That might not be the correct terminology but it means I don’t see their posts in my daily thread but they can still see mine assuming they haven’t unfriended or blocked me. I also did something to stop me getting so many ads. And all that helped. But it wasn’t enough. Because some people simply post too much. And there’s no reason for it. My son-in-law who’s developing a second career as a stand-up comic posts constantly but I can’t really unfriend him, can I? because occasionally (maybe twice a year) he posts something that genuinely interests me—we both mourned the death of Bernie Wrightson, for example—and it’s nice when that happens but I could so easily have missed it in my daily duty scroll. I think a good test is, whenever a name appears in your feed, ask yourself: Can I recall three things about this person bar their name? And I should add a proviso: Anything from the last… oh, let’s be generous… five years? Facebook likes anniversaries. Here’s one it should add: It’s been a whole year since you commented on or even liked such-and-such’s feed: maybe you should ask yourself if you’re friends. As you know I go to the other extreme; I hardly ever post. I think about it and then I ask myself who would genuinely be interested and usually I talk myself out of it. Perhaps as I no longer blog I should make a little more effort to raise the bar. Because, at the end of the day, it’s its users who’ve made more of a mess of Facebook than its designers, not that they’re blameless. BTW I had the mother and father of a stomachache yesterday. Just to keep you in the loop.