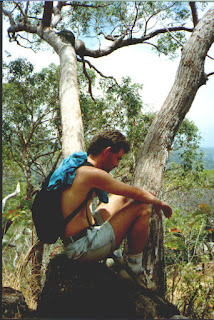 You can’t choose the songs that whisk you back to another time. They just do.

In an ideal world, it would be a track from an album that has grown and matured, over the years, into some deeply revered and much loved thing. Better still, some obscure and troublesome classical movement from some obtuse symphony. How great it would be to evoke my memories to a soundtrack like that.

But that’s not how it happens. Not to me anyway. The songs that whisk me away every time are simple, rather familiar pop tunes.

I heard Elton John’s song ‘Sacrifice’ the other day and off I went again. Swept away on the tides of the memories evoked by that tune. Back to January of 1990.

‘Sacrifice’ didn’t become a number one hit in the UK until it was released in June of 1990 but we weren’t in the UK in 1990 anyway so that’s a moot point. Although it was apparently never a major hit in the US, it certainly got a lot of airplay over there in January of that year. A lot of plays. That’s where we were and that’s how it got into my head and became associated with that time. Tied up with the drive from San Francisco to Tijuana.

Patricia and me weren’t yet married but we were having a ‘year out’ around the world. That’s a misnomer, actually, because the trip only lasted 364 days and not the full year, as advertised. The whole thing must sound a bit middle class and privileged now but it was really anything but. In late 1989, I was embedded in my career in London. I could have envisaged myself doing anything else, being a somewhat unadventurous type. What happened was that my car got stolen while we in the swimming pool one evening and it was subsequently destroyed by the nice people who stole it. In the time it took to get everything sorted out, I became accustomed to not having a car in London and so, when the insurance money landed, and under Patricia’s adventurous inspiration, we said ‘sod the car’ and spent it all on a cut price world tour instead.

It was one of the best decisions ever. In my current existence, where I rarely go anywhere or do anything, the memories of the miles we traveled and the things we have seen, warms me and keeps me contented in my relatively confined life.

And random songs sometimes bring me back to particular places.

As we drove out of San Francisco and headed off south down along the west coast, the Elton John/Bernie Taupin song seemed to be playing over and over and over again. I misheard the lyrics, thinking it was about some unfortunate person called CoCo Hall. In my mind, she was a sort of a modern day version of ChoCho San from Madama Butterfly. Sad and abandoned. Effectively ‘hard done by you’ as the lyrics say. Of course I was completely wrong. 'CoCo Hall' was actually 'Cold Cold Heart' but that didn’t stop me from singing along anyway.

Whenever I hear the song now, I experience a vision of the sort that you see in TV dramas all the time now thanks to drone technology. We are driving on Highway 1 down towards Carmel and I see a birds eye  view of us in our car, roof down, as we cruise along. We didn’t even have a convertible car but music-evoked memories can be a bit fluid like that. It was a magical time. Rare in the knowing that it was magical while we were doing it as opposed to only finding out it was magical many years after the fact.

The song reminds me of going to pick up the rental car in San Francisco. We were staying in a  hostel somewhere out by Fort Mason so I had a bit of a trek to get to the car place. I was then going to drive back and collect Patricia. I remember sitting in the hire car for a long, long time, trying to figure out how to put my seat belt on. It hung there above my head in a really unusual place and I pulled at it and tugged at it but couldn’t get it to go around me. In the end, I resolved to drive the car back to the hostel without the seat belt and use Patricia’s brain power to figure it out. I turned the key in the ignition and the seat belt automatically coiled itself around me and secured. Okay… that’s sorted then.

I remember small things. All of the sign posts sounded like songs. Staying in random motels just because we’d never done that before. Having breakfast in some very tidy little back street pastry shop in San Luis Obispo. Trying to track down an old friend in San Diego and, when finally successful, spending a day with her on the beach in sight of The Hotel Coronado from 'Some Like it Hot'.

The border into Mexico. I remember the considerable numbers of  troubled people on the Mexico side, pleading for help to get back into their own country. A gauntlet of hard luck stories to be run.

A visit to Hearst’s Castle. Opulence and grandeur coupled with a subtle sense of slow crumbling. A sign for Disneyworld, quickly driven past.

And all along the way - the excellent way - there was that song playing on the radio. When I think of it all now, I think of the sun and the open road and the not knowing what lay around the next bend. But I always remember an occasional kind of low key sadness too. I remember being in some small town on a Friday afternoon and that song was playing. Everybody seemed to be buzzed because it was Friday and the weekend was here. But we were hobos on the road and everyday was a Friday to us. There was a brief sense of missing the ‘work is now done’ joy of a regular Friday afternoon. And, on the positive side, another sense that when we finally returned to that way of life, it wouldn't be all bad. Sometimes, too, out on the road, there was that small feeling of loneliness and isolation. To be a million miles from anyone who knew you or cared anything about you. We had each other, though, and that has always been plenty.

I also remember that every little place seemed perfect in its own way. That it would be easy to stop and stay forever in any one of those places and that life would always be easy and good there.

But, whenever I fell into thinking like that, the song was always there. Playing. Reminding me ever so gently.

I don't know if you ever read any of our travelling blog from 2011 but we had a similar adventure (also funded by some money we didn't expect to have...). The memories and photos get me through many of those man-life-is-dull sections of everyday life...

Did you watch 'Big Little Lies'? Worth it just to re-experience the views of the US West coast...

Hi Rachel. I remember your trip well. It reminded me of ours. :) Big Little Lies, which I enjoyed (it had an ending) certainly evokes the scenery. The opening title sequence to the movie The Sandpiper does it too... plus there's a great tune.

I remember the song—never liked it much (I’d starting losing interest in Reg by 1976)—but it doesn’t evoke any memories for me whatsoever. It’s certainly not a part of the soundtrack of my life. Not in the same way as ‘Rocket Man’ and ‘Saturday Night’s Alright for Fighting’ are. But even they’re not linked to specific memories. Just the haze that was my early teens. I was watching an old Top of the Pops last week and, as I usually do, thought what a great time for music the seventies was. I’m sure the sixties were too but the seventies was my decade. I watched a documentary a while back about the seventies and, God, it was a bleak time: how come I never noticed?

I have been to America but I stuck to the San Francisco Bay Area. That was enough and I’ve never had any desire to go back. My wife’s there just now—her first visit since Trump took power—and I’ve been gutting my office. Well, rearranging it. I don’t work well surrounded by even a little clutter. I really don’t.

I rarely go anywhere these days. I don’t need to. I live so much in my head. I’m not saying I’ve no fond memories of travelling because I have but I’ve never had a burning desire to see things in the flesh. I actually think visiting America put me off travelling for life. San Francisco could’ve been Glasgow; the only difference is where Glasgow has a pub on every corner San Francisco has some kind of eatery. City Lights was just a bookshop. Alcatraz was a blur in the distance. I think I actually enjoyed Dublin more although try as I might I couldn’t feel Beckett’s “presence” anywhere.