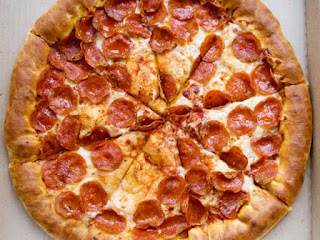 One thing I learned, from last week’s look back over ten years of blogging, is that you never know which scribble might turn out to have more value than another.

As I looked back over the years of posts, I could see that things of seemingly great import at the time now looked irrelevant and, frankly, a bit dull while some of the tiny details now seemed quite evocative and relevant.

This was rewarding to see. I’ve always been consistent in not trying for a ‘showstopper’ blog post every time I sit down to write one. Therein lies the way to ruin. The object has always been to just get something down. Something that has coloured my week in some way. It doesn’t have to be brilliant, or even obviously interesting to anyone but me. Just get it down. Last week confirmed that those ‘tiny posts’ can be just as good as the big noisy ones… at least for me.

That’s why I’m going to write about the Pizza Routine this week. It’s hard to see how anyone would be bothered with the details of this but it meets the criteria for a blog post. It’s real and it’s something I’ve thought about (and done) this week.

So here it is.

On Saturday evenings, Sam likes a takeaway pizza. He’ll have worked hard in school all week and he deserves it so there’s no argument there. Patricia and I don’t go for  pizza so we usually have some dinner made at home which gets eaten while Sam has his pizza.

I have a routine around this pizza which is more calculated and more rigorously enacted than any other single aspect of my life. This is partly because Sam has liked takeaway pizza on Saturday evening for quite some time now. The routine has had time to evolve and cement into what it is now. Something that is completely set and reliable in an otherwise busy and often uncertain week. Something that gives me more pleasure than you might think possible.

The routine starts with the making of the evening dinner. That’s a variable, depending on what the dinner is, but it will most often be a rice-based meal and the moment when the rice goes on to cook is the moment that the routine really kicks in.

The rice goes on, it’s now time to order the pizza. Get to the computer, get to the pizza website, re-submit last week’s order. Yes, I will collect. Yes, I will pay when I get there. The moment the pizza is confirmed as ordered is the moment that I set the stopwatch on my phone.

A quick check that the rice is doing okay and into the car. Drive to the garage, park up, go in, buy a Dr. Pepper in a bottle. One Euro, Sixty Five. No, sorry, it’s gone up to One Euro Seventy now. That held me up by a  few seconds in the first week it happened but then I adapted. Correct change, back to the car, walk don’t run.

I walk in the door and greet the staff behind the counter as I walk up to them. They all know me and we exchange a line and a smile or two. The pizza is ready and is handed to me as I get to the counter. I hand over the correct money, turn and leave, wishing them all a good evening. They are smiling collaborators in my little routine. Although they probably don’t know I am actually on a stopwatch, they do know that I am an immovable constant in their world of impatient customers and cold uncollected pizza. It is a peculiarly specific contract is a rather loose world. If they make it on bang on time, I will collect it bang on time. They always deliver their end, no matter how busy they are. I think they may even jump me up the queue sometimes, knowing that I will open their door ten minutes after they see the order.

On the drive home, Lyric FM is playing the Saturday Night Opera and I always listen to it as I drive to the pizza place and back. The best drives are when the opera is coming live from The Met in New York via the Toll Brothers Network. I love to hear the generous sponsors listed and the breathless description of the opera storyline then the applause as the conductor comes out and the incredible fast start as soon as he hits the podium.

Then I am home. Sam meets me at the door and takes his pizza and Dr Pepper while I check the rice, which is now done. Sometimes I steal a slice of pizza as Sam doesn’t eat it all.

Our dinner is ready. Sam has his pizza. We settle down for some junk TV. All is pretty right with the world.

And that’s all there is to it, the Pizza Routine. What’s the point, Ken? Why waste the time it took to write this down?

It’s like I said, I learned something last week, when I was reading back over the writing stuff of ten years. In another ten years time, the things that seem tiny and irrelevant now may not seem such any more. The Pizza Routine will be long gone. Who know what else, apart from that silly routine, may be done with? In ten years time, if I am spared, I may look back and smile and say, “Gosh, yeah, remember that?”

And, who knows, you the reader may find something to hold in my silly little routine. Something quite unknowable to me may be evoked in you as a result of this waffle. That’s how it works sometimes. That’s where the magic lies.

But that’s your business, not mine.

There's a movie out at the moment called Baby Driver, you may have seen it, maybe not. Anyway, there's a much talked about scene called the coffee run scene, which is beautifully choreographed to music. I imagined your pizza run in much the same way.

Okay I don’t like pizza and I don’t like opera. Not a good start to today’s comment then. But I do like routine. There’s something safe about it. I used to be better at it but since my sleep pattern’s lost anything resembling a pattern I just have to do my best. But in an ideal world we would have lunch and a sitcom at noon (currently we’re on Kim’s Convenience); tea and a sitcom at five (currently People of Earth) followed by dishes and a music album (yesterday we had Chick Corea’s Spain); TV commences at 6:20 accompanied by chocolate (28g approx.) and a coffee; snackerdoodles should be at nine and bed at eleven. The 6:20 start is to fit in three forty-five minute shows from a bank of twenty-two mostly American shows watched in alphabetical order (we don’t do ads in our house) and two coffee/toilet breaks. At nine we either watch two hour long shows (something saved from BBC is a safe bet) or another two forty-five minute shows (again usually British) followed by a cartoon from a bank of three (currently Animals, Bob’s Burgers and F is for Family) or a thirty minute dramedy (currently Flaked) if we have an extra ten minutes. The problem is the TV shows, which used to be so reliable, now vary in length and so sometimes it’s hard to fit three shows in and yet sometimes we’re done at half-eight. Of course if Carrie was in charge we’d do things very differently. We’d binge-watch shows for starters. That’s something I never do. Two episodes in a row is about my limit. I know the world’s changing; entire seasons appear out of nowhere and there must be people out there who sit down that day and watch every episode back to back into the early hours but although I can see why they would it just seems such a shame. In fact it seems hard work.

I really like Bob's Burgers. Rick and Morty too. I like a good cartoon, me. Two episodes of anything would do me too. I prefer a movie but a good TV series works. We enjoyed both series of The Crown.

Thanks for this - I loved reading it!