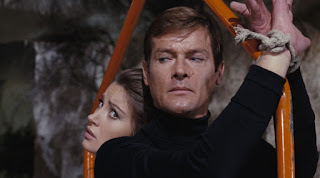 When I saw on a Facebook update that Sir Roger Moore had died, I surprised myself at how sad and nostalgic I immediately felt. Thinking about it a bit more since, I can see that it was entirely appropriate and justified that I would feel a little of that.

Roger Moore was my James Bond in many ways. He arrived as James Bond in 1973 when I was ten years old but I had known that he was coming for almost a full year by then. As I’ve  written about before, I was already a full blown James Bond fan. I had collected and treasured all of the ‘On Her Majesty’s Secret Service’ bubble gum cards, although I didn’t see the film for many years later, and I had been to see ‘Diamonds Are Forever’ in a matinee at the Gaiety in Sligo when it first came out.

But I was ten now and there was a sense that this new James Bond was going to be mine. I awaited the films that followed with a sense of great childhood anticipation and the moments when I first got to see them still live large in my memory.

Live and Let Die.  Since the bubble gum cards, I had always tried to get whatever information I could about a Bond film before it came out. My memory is that, before I ever saw Roger Moore as Bond, I had got hold of the book of his diaries of the filming of the movie. I gobbled it up and it started something new inside of me. To my ten year old surprise, the book was not about James Bond and spies and stunts and adventure. It was about the rather tedious business of making a movie. It was about a middle aged man playing poker with his producer and worrying about the press and battling some awful-sounding affliction called kidney stones. What it gave me was a affection for the James Bond production process that was equal to the films themselves. I don’t think I’m alone in that. The extravagance, the excess and the sheer awful hard work and toil that goes into making the shiny, rather silly, end product still engages me to this day.

There were eight pages of still images from the upcoming film in the centre of that diary/book and I pored over each one. I can still picture them now. That speedboat flying over the road, James Bond tied up with Solitaire, the exotic unheard-of gadget called a ‘hang-glider’.

When I finally saw the film on its release, in another matinee, I lapped it all up and went back again to see it the week after. I misunderstood so much of what was going on in it but I loved it nonetheless. When one character mentioned the ‘klu klux clan’, I could repeat the words perfectly but I had no idea what it meant. I thought that James Bond had a flame thrower/antiperspirant can on his person that he used to dispatch a snake until Niall Hopper explained to me that he lit the spray with his cigar (I was terribly impressed by that) and, most remarkably, I thought the overall conceit of the film was a bad man who wanted to spread the illicit use of herons on the mean streets of New York (this is true). I thought the herons lived close to where the alligators were.

Roger Moore in Live and Let Die probably fueled my childhood fantasy that I would one day be James Bond. I don’t think Connery could have done that for me, he was too tough, too strong, too brutal. Roger, like me, was a rather slender winsome chappie. He made the idea work in my head.

Although much maligned, The Man With the Golden Gun remains one of my personal favourite Bond Films. I always maintain that Bond movies are like bread. You have to get to them when they're fresh and new. The ingredients and baking method means that they tend to lose their attractiveness rather quickly. I loved ‘Man With the Golden Gun’. Again, I was primed by the Ian Fleming book, an edition updated with another eight coloured stills in the centre. I stared and stared at the upside-down car over the river and wondered how it could be. This was the very first film I was allowed to go and see at night unaccompanied by an adult. I went with George H who I know looks in here from time to time. Hi George. This time it was in The Savoy. Although I didn’t have such a word in 1974, I found it to be a terribly romantic film. In retrospect, the music added hugely to that impression. John Barry’s lush strings are very much in evidence and, again, though I had no clue such things were going on at the ripe old age of eleven, seeds were being planted which still poke discernible tendrils through my mind today. I still listen to John Barry's music with disturbing regularity.

I went to see The Spy Who Loved Me with my friend Shane R who is now an important army man in New Zealand. He looks in sometimes too. Hi Shane. I knew there was the mother of all skiing stunts in the pre-title sequence and I thought I knew what it was. I had seen a clip on Clapperboard where James Bond had done a sort of ski-somersault and shot a bad guy at the same time. I thought, ‘yes, it’s a great stunt’ and enjoyed seeing it on the big screen. The shock of the skier shooting of the edge of the cliff into the void and then opening his parachute was a shiver inducing moment that I will never ever forget. This was the almost perfect Bond movie and, although the one before pips it for me, I loved everything about it and I lapped it up.

I can’t go any further. Roger's Bond lost me with the subsequent movies. The gags became too self deprecating. All sense of edge was gone, for me at least. 'For Your Eyes Only' was almost good enough to bring me back but too much damage had been done.

Roger Moore was a part of my teenage life. For years I looked forward to seeing him with real excitement and anticipation. In real life, he never seemed to disappoint. He was always wry, always self-deprecating, always Roger.

Thanks for the memories. Sir R.

You did it good.

Hi Ken , Sad news that Sir Roger is no longer with us. I remember reading that book too, could still be in my loft, need a stuntman to get it from there...I'm fond of 'The Man with the Golden Gun' too even tho it's often dubbed the worst Bond, probably by people who haven't seen Licence to Kill.Hard to believe it's over 40 years old now, tho I remember the 'risque' newspaper photo of an almost topless actress from the movie being passed round a school classroom on a hot tuesday in may.. God that's sad..

For me Sir Roger was always 'The Saint' a favourite of my Mam's, watching tv in B&W,
WAY BACK IN THE 60'S.. He became the best replacement for my favourite Bond Connery, so the transition was so much easier. If stories were true, Moore could actually have been Bond Earlier but for TV, He was committed to The Persuaders &couldn't take the offer to replace George Lazenby,even earlier the Tv series Ivanhoe & upcoming Saint prevented him from being the 1st Bond, so the stories go.I kinda knew you'd post on Sir Rogers passing, as usual did a great job , hope you're keeping well Ken

Hi G. I remember Britt on the horse. I may even have brought it in. (I didn't). Take care. K

Odd, I’m not much older than you and yet I have to agree with George H, for me, Roger Moore will always be The Saint. He’s as much the definitive Simon Templar as Connery, again, for me, is the definitive James Bond. I could tolerate Ian Ogilvy but hated Val Kilmer’s take on the character as much as I hated Robert Downey Jr.’s turn as Sherlock Holmes despite the fact I can’t imagine another actor playing Tony Stark better. Moore was the last Bond I saw in the cinema—I think we’ve talked about this before—and I didn’t hate the film but I struggled seeing him as Bond. I have the same problem with Pierce “Remington Steele” Brosnan. And yet I’ve never had an issue with any of the actors who’ve taken on the mantle of The Doctor and to my mind the one with the most baggage (i.e. Peter Capaldi) has turned out to the one of the finest Doctors there’s been even if he has been let down at time by the writing. Why’s that, I wonder. I do accept that a character worth his salt is multi-faceted which is why I was perfectly happy with both Peter Cushing and John Hurt’s versions of Winston Smith; they each gave nuanced performances and although I can see why Hurt’s is rightly lauded he didn’t capture everything but then acting is an art. Who’s the definitive Lear or Hamlet or Macbeth?