The Blind Man and the Little Girl 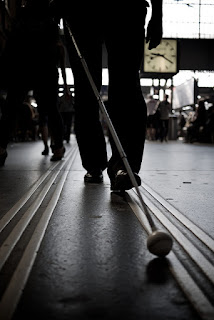 It’s something I think I mentioned before. The stories of the world slip past us for the want of a tidy ending or a catchy moral. Things happen almost every day that are a little bit remarkable and worth setting down but they slip through our minds because there is no hook or piece of bubble gum on the end to make them stick there.

I increasingly think that stories without conclusions have an important part to play in the memorabilia of our lives. We treasure old photographs but, quite often, they offer no narrative, no punchline, no neat summary. They capture a moment and they stop there. For us this is often more than enough.  The snap shot becomes a thing of nostalgia and truth and often great value.

Why can it not be that way for our stories too?

Yesterday, I ventured out of the office and down to the post box on the corner. Post is quite a rare thing these days, for me at least. Most things go as email and attachments and such. Yesterday’s post could have gone the same way. For some reason, I felt like a bit of printing and signing and enveloping and stamping. No idea why.

On the way to the post box, I spotted a blind man some distance up ahead waiting to cross over the street to my side. I  did a quick assessment of whether I could be of any value to him and just as quickly decided that I couldn’t. I knew him from around the place and he was pretty nifty with his long white cane. He didn’t need me and any intervention on my part would have been more around me feeling good than him being assisted.

Let him alone then.

As I came on up the street, he got the green on his pedestrian crossing light and rapidly came across. He then started working his way up the edge of the shopfronts, tapping and brushing his way along. As he approached me, he also approached a point where a building kicked outward into the pavement. He came towards it at a pace and I again debated intervening. But, no, the tip of the white cane found the jutting-out-part of the stone, a neat correction was made, and on he went. A tall rangy middle aged man, making his way.

At the post box, I checked that everything was right with my envelopes and posted them into the green pillar box. On my way back, I almost caught up with the blind man again. He was turning into the alleyway where my office is. As he turned, a father gently held up his daughter’s progress with the palm of his hand. The girl was about seven or eight and she watched with active interest as the blind man made his way past them and on up the alley.

As the girl looked questioningly at her Dad, I heard him quietly say, “The man is blind, darling, so we don’t want to get in his way, right?”

The blind man had progressed a little further up the alleyway but he obviously heard the words because he stopped suddenly. He didn’t say anything, he just stood there until the man and his daughter caught up with him. I had almost caught up too. The guy knew when father and daughter were beside him.

“Would you like to try my cane?” he said.

The little girl was understandably hesitant. It might not even have been entirely clear to her that she was being spoken to. If the father had not been so relaxed and open to the interaction, it probably would not have happened. But it did.

Slowly, so slowly, the little girl reached and took the end of the cane. Both men smiled.

“I can’t see. That's why I have to feel for things with my cane,” he said. Then he said, “You have to close you eyes.”

Quickly, trusting now, the little girl did just that.

“Then try to find your daddy with the end of the cane.”

Quickly, almost instinctively, the dad took a step back to increase the challenge a little. The girl swept the can around and almost immediately connected it to her dad’s knee.

“There he is!” she shouted and everyone, myself included, smiled.

Then I went back to work.

When I’m looking for new books to read there’s one thing that’ll put me off before I get started: any blurb or review that praises the plot or the author’s storytelling abilities. This doesn’t mean I’ve not read books with clever plots because I have and I marvel at their writers’ ability to tie so many threads together. I’m not completely against plots but I never forget they’re artificial; in real life things are never neat. I think free will’s a lovely idea and I’m all for it even if I’m not convinced that our wills are nearly as free as we think they are but I have always, even when I was religious, been against the notion of a grand plan. I mock it in my novels but as you well know my books frequently contain things I don’t take seriously in real life. I’m not saying nothing ever gets resolved in the real world—sometimes you do get the girl, the job, the thing you’ve been bidding on eBay for or control of the remote—but I, for one, certainly don’t go round expecting it. My wife didn’t get her bouquet of flowers on her birthday because Interflora apparently sent them to the wrong depot. That’s life.

I think you’ll find my novel Left interesting when I finally get round to sending you a copy because it’s very different to anything I’ve done—all the major characters are women for starters—but mostly because of how I wrap things up. I don’t answer hardly any of the questions that’ve been piling up. I provide a possible scenario that would work but the reader knows full well that’s all it is; he gets to listen in on an imaginary conversation but who’s to say if any of it is remotely accurate? In the book a daughter comes home to clear out her late father’s flat, a father she’s not been especially close to, and, of course, everything she picks up makes her wonder if she ever knew him at all. And that’s the way it goes. Why is there a builder’s hard hat on top of his bookcase? Why does my dad own a copy every film Christina Ricci made? Since when did he start drinking sherry? But, of course, he’s dead and you can’t ask him so you’re left to connect the dots on your own. It’s like an archaeological dig: I love the way they’ll dig up a handful of bones and then present us with an artist’s impression of a 50ft-long dinosaur. When I was revising The More Things Change one of the things I grafted in was Jim thinking about hiding a pipe in his belongings to give people something to scratch their heads over. I do wonder what my daughter’ll make of what I leave behind. Will she realise what the significant things are or will they be the first to get consigned to trash bags?