Conversations With Friends by Sally Rooney 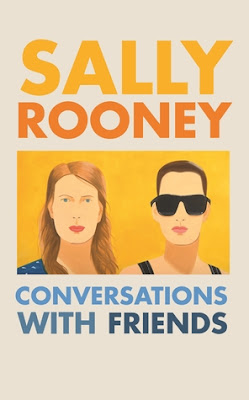 Thursday night was great. I got to chat to my friend Sally Rooney in a Linenhall Arts Centre that was packed full of warm, welcoming people. I’ve known Sally and her family for many years and it all felt more like a nice catch-up than an interview. I really enjoyed myself. Sally’s first novel ‘Conversations With Friends’ was launched last week. You may know this already because there have been articles and interviews in most of the main newspapers about it and Sally’s been all over the national airwaves, discussing it, and will continue to be for some time to come.

So, having mentioned the wonderful evening and the massive attention the book is getting, I’d like to spend the rest of this post on the book itself.

I suppose I can’t know exactly for sure how I would have reacted to the book if I had not known Sally. I can be pretty sure, though. As a book lover, I believe I would have loved this book even if I’d never heard her name. It’s beautifully written, you see. Sally has been writing all her life and so this first novel comes with a sophisticated yet natural style which is already fully formed and highly engaging.

The writing is sharp and spare but never to the extent that it alienates the reader. The central character, Frances, comes very real off the page. Perhaps this is partly on account of the unforgiving mirror she often holds up to herself.

Sally brings her natural intelligence and erudition to her writing but those qualities alone would not be enough to make this book. Sally brings a third ‘X Factor’ which younger people than me might tend to call ‘The Feels’. The four central characters in the book are all smart and bright and metropolitan in their way but they all have their doubts, their petty moments, too. They all make their mistakes.

I won’t give you a run down of the story. It’s there between the covers of the book. I always think it’s best to wade in knowing as little as possible. See how you go.

In certain ways, the book evoked 'Catcher in the Rye' for me. Sally has read her Salinger and, knowing her as I do, I know her fondest regard is for the writing which lies beyond ‘Catcher'. ‘Franny and Zooey’ is a work that I am now resolved to get stuck into, having heard of how highly she regards it.  I was also reminded of Brett Easton Ellis in the cleanness of the prose and dialogue and, rather conversely, of Jane Austen in the way human truths are probed with wit and insight within a relatively close knit social situation.

I try never to judge a book by its cover but, in the last few days, I’ve been thinking about the reason why I loved my copy of the book more than I loved everyone else’s on the launch night. I was lucky enough to be given a copy of the British hard cover edition with the painting ‘Sharon and Vivien’ by Alan Katz depicted on the front. The Irish edition has a photograph representing the two central characters on a blanket in the park on a summer’s day. Both editions are beautifully produced to the highest standards but I found myself consistently drawn to my own copy rather than the Irish version.

This point is not about book covers but rather it is about heightened reality and I only figured this out in the last day or two. Perhaps Sally’s greatest achievement is to create a subtly heightened reality in her novel. A place where everything seems real but which is actually half a degree higher than real.

For all the elements of harsh reality and pain in the book, there seems to me to be an overriding romantic ‘air’ which permeate the pages. At the end of the novel, the famous bookshop and the park and Dublin at Christmas time all seem to meld together to evoke an almost Woody Allen-like warmth for the metropolitan existence. There is almost an echo of ‘An Affair to Remember’ as Nick and Frances move across the winter city towards a predestined rendezvous. I think that's why I tended to migrate towards the 'heightened' cover rather than the 'real' one. For me, it reflects more readily the discreet fiction of the story.

I’m not trying to ‘solve’ the book or even try to wax clever about it. If anything, I’m just trying to show how I became involved in it. I smirked at it and I winced at it and shook my head in wonderment at it and I closed its covers in shock and then opened them again soon after.

‘Conversations With Friends’ is, to my mind, a very good book indeed and I recommend it to you.

It’s always hard talking about books written by people we know. I wouldn’t say I’m merciless in my reviews—it’s not in my nature—but I do think I’m fair. If I say a book’s good then you’d better believe it. Whether you’ll like it as much as I did is another matter completely especially since I have eclectic tastes. What I’d like most people to think after they’ve read one of my reviews is: Well, if Jim liked it this much it must at least be worth talking a look at it. And it’s like this wee non-review here. I can hear you saying in between the lines, “Trust me. I’m a writer. I know about shit like this.”

Regarding Salinger, yes, do give Franny and Zooey a go. It’s a bit of a shame that people only think of Catcher in the Rye when they hear his name. It’s far from being a bad book. I adored it as a teenager but wasn’t so impressed when I reread it as an adult. I read Raise High the Roof Beam, Carpenters & Seymour: An Introduction in 2013 and was impressed by it. It made me want to read more by him and Franny and Zooey is definitely on my list. Trouble is it’s a very long list.