Great Evenings and How to Have More of Them 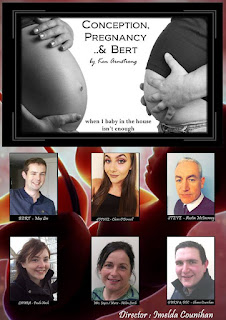 Last week I told you about my day out in Dublin. I didn’t tell you what I did when I was finished there though. I’ll do that now.

Most people would just go home. Not me. Nuh huh. I pointed my car in another direction entirely and headed for the town of Gort in County Galway. It was going to be one of those good evenings for me. The Wild Swan Theatre Company in that fine town were putting on one of my plays, ‘Conception Pregnancy and Bert’, and I was driving down there to see it.

I get to do this a bit and I feel lucky every time I do. I get to go to a town that I don’t know and find a band of smart talented people there who have taken weeks and weeks learning off some of the silly stuff that I write down in my spare room. They have grappled hard with my pages and figured out how best to perform them. Then they'll play it all out for a willing audience. What a compliment they have paid me in taking this on. How very lucky I am.

In the case of the Wild Swan Theatre Company in Gort, that was only the start of it. Imagine my surprise when I marched in to a huge room elegantly dressed, table by table, as if a society wedding party was about to motor in at any moment. Walk around a corner and there was this beautifully set stage with hundreds of seats carefully laid out in front.

This was Supper Theatre, except it was more Dinner Theatre as the patrons were about to be treated to a full sit down meal in between the two plays they had come to see. My play was up second, after everybody had been wined and dined.

I won’t single anybody out. It was just a great evening. The first play was very well written and performed and went over marvelously with the audience. The second play was a little more odd and maybe a little more edgy. It needed a good director to get its quirky set-up across and a brave cast to play out the rather extreme levels of silliness that ensue. The Wild Swan Theatre Group delivered all of these things in spades.

My usual delight is to sit at the back and watch the play and the reactions of the audience at the same time. I can learn a lot from where people laugh, don’t laugh, shift uncomfortably in their seat or even look down at the floor. This time, my cover was blown by a nice introduction from the stage. Never mind. The audience went along with the play as the pace accelerated and there is nothing more satisfying than seeing a room erupt with laughter at some of your own writing.

I drove home after a very, very long day, buzzing and happy.

So thank you, Wild Swan Theatre Group. It was a great night.

I only wish I could figure out how to have more of them.

My plays generally end up getting performed by a sort of ‘word of mouth osmosis’ or, as often as not, because somebody saw a production somewhere else and thought the play might suit their group for a performance too. I have quite a few plays and quite a few of them have had quite a number of productions. Which is great. Don’t get me wrong, I know it’s great.

It’s just that there’s no plan to it. None on my part anyway. No real rhyme or reason. I work hard on the plays, trying to get them as good as possible, and their first productions usually emanate from the wonderful people in the Linenhall Theatre here in Castlebar coupled with my production and directing friends here in Castlebar who all support and encourage me more than I can say. In the case of ‘Conception Pregnancy and Bert’ it was initially born as the third of three radio plays written for and produced and directed by Mary Carr and St. Patrick’s Drama Group in Westport. It then evolved into a theatre play, with the encouragement of some of my Castlebar friends.

Once a play has been first-produced, I generally end up at a complete loss as to what to do with it next. Sometimes, as I was saying, word of mouth carries it on to some other adventure. One play has been published and one great production came out of that but then no more. Another play is on the national database for youth drama and that has resulted in three productions since the first so that was good. Sometimes, though, it all just stops in Castlebar and I don’t really do much about it.

What should I do? Should I send the plays more vigorously around to theatre groups? I guess I should. That seems obvious even now that I’ve type it out. Should I make the scripts downloadable from this website? Very few people come here, in actuality, so I’m not sure that would be much use but then Google does seem to index the stuff on there pretty well so maybe it might be worth doing. From time to time, I just bang up a link to a script at random and that too has led to a most interesting production.

Whatever it might be, I should really do something. Because I like having those great nights out and I love seeing the plays picked up and performed for audiences all over the place.

I mean, who wouldn’t?

Maybe you need a "hub" website, a single place where your plays are available, your C.V. etc. and a link to your social media and blog.

Marc's suggestion seems to make a great deal of sense. I hope you can follow it, or something similar, up. Sadly we live in a world wherein "if you've got it, you must flaunt it" ... humble hopes that new literary works will filter through just won't work any more.
You have such a wide following on Twitter inter alia and if you ever want me to promote any of your work on Twitter or Facebook, I would gladly do so,
K

I’m much the same, Ken. I wrote Vladimir and Estragon are Dead when I was living in the Gorbals and literally within walking distance of the Citizen’s Theatre. My wife, my daughter and I went to see a performance of Endgame and so I was well aware what kind of space they had and yet I never did anything with it. It got packed up with the rest of my stuff when we came here and apart from sending you a copy to pass on I’ve never looked at it since. Periodically I half-heartedly look online but let myself be put off by the slightest thing. I’m terrible that way. And it’s the same with the books. The older I get the less I want to interact with other people and the less important it is that I become known. You, on the other hand, must have quite the CV when it comes to plays performed. Me? I’m an unknown quantity. You know theatres and the people who run them. You’re in an enviable position when it comes to approaching someplace new. Go for it, I say.

Marc: Thanks, mate. I think I'm starting to get focused on this now.

Karen: Thank you for your support. I will try to push the scribblings wider, I think.

Jim: Sometimes I feel the tide of encouragement here is all one-way, from you to me. I must reciprocate more by reminding how wonderful you are and how your writing deserves a wider readership. Thanks mate.