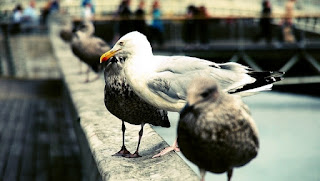 One day last week, I had to drive to Dublin and do some stuff. Dublin is strange for me these days. I feel like I belong there but yet don’t belong there at all, both at the exact same time.

My years in London, and in Dublin before that, have left me with a general ease in the big city. This doesn't ever seem to leave me, no matter how small-town-trained I become.

Whenever I go there, I tend to slip in to the rhythm quickly and slide easily through the melee.

On the other hand, I now also have a tendency to study every single face, to wonder who they are and what their story is. It’s very tiring and it makes me want to get out and go back to my own small town, where I know many of the faces and where I have at least some idea of where they are all going.

Here are three small points from my day out in Dublin on Thursday. I’ll set them down in order. As far as I can tell, they are linked by nothing at all, apart from the fact that they happened to me.

I had to visit a venerable library reading room to look some stuff up. This next part will probably tell you something about myself but, before I went inside, I tried my pens on the back of my hand. I had quite a few. None of them would write. This actually happens to me quite a bit as I tend to migrate from dusty dirty places to academic reading rooms and the dust often lingers and renders my ball point pens incapable.

It was a problem. With what could I make my notes?

There was a convenience shop next door to the library. I went in to buy some new pens. There was a guy sitting outside the door, holding up an empty coffee cup. He asked me for some spare change but I only had my pen money and so I couldn’t oblige.

The man behind the counter had loads of pens, right up until he went and looked for them and found that he didn’t have any at all. He was sold out.

“Here,” he said, pressing something into my hand, “take my pen, Take mine.”

Hopefully this kind of thing happens to other people as often as  it seems to happen to me. People are just randomly and quite outrageously nice. This guy didn’t know me from Adam but yet here he was, giving me his only pen. He really insisted I have it.

I’ll just type that again… he just wouldn’t. No, I don’t know why either. I generally try to be nice, I guess some people are encouraged to be nice back to me. To try to be fair, I bought a Mars bar that I really didn’t want because I am trying hard to reduce my sugar intake.

The guy with the cup was still at the door. I gave him my pen money and the Mars bar too. Truth? I like to think that’s why the guy gave me the pen. A sort of Time Travel Karma.

As a footnote to this first point, the library would not allow the use of pens. They supplied nice pencils.

My second point is about wildlife in the city and how very close to it you can stand.

On O’Connell Bridge, in the beating heart of the city, there is wildlife sitting there. It’s not foxes or bears or even rabbits. It’s seagulls. No, don’t go yet, let me tell you. Have you ever seen the seagulls that perch on the guarding of O’Connell bridge? They are Huge and they are right there. You can stand and look at them so that they are tiny inches from your face and they will stare defiantly right back at you. The ‘Danger’ in them is palpable. Their beaks are clearly razor sharp and they could easily lean forward and have your eye out with a savage peck. Their webbed feet (are they called ‘feet’? I can’t think) are so vivid and strong. Their feathery mane oily and stained from the city. In the wildest of the wild places, you could not hope to get so incredibly close to an untamed thing like you can there on O'Connell Bridge. It’s really quite something.

I met my good friend J_ and we went to the lunch place at the top of Debenhams for a bite to eat. Up there, in a certain corner, there’s a bench that you can sit up at and have your dinner. Beyond it, there’s a void, all the way down to the ground floor. And out in front of you, through the full height atrium glazing, lies the whole of Dublin City stretched out before you. Look down, and you see all the little people milling around on their lunchtime missions. Look up again and there’s the city, stretching away off to the Wicklow mountain. That bench sure doesn’t look like much… until you sit down at it. Trust J_ to find that. He knows stuff, he does.

Up there, looking out over the streets and buildings, I felt it again. I felt I belonged to the City and yet didn’t belong to it at all.

Although I was born in Glasgow I spent most of my formative years in a small town so I do get where you’re coming from here. I can’t honestly decide where I prefer living. There’re pluses and minuses to both but these days I think I’d opt for the small town especially since I do virtually all my business online. I literally only ever have to go down the town once every fortnight to pick up my prescription and it looks like a new chemist might be opening up down the hill so I might switch there if it’s any good. Cities used to quite excite me but not so much these days. Nowadays everything I want to get to is miles away from where I am and although I desperately need every scrap of exercise I can get and more I still resent the fact the shops aren’t in a nice straight line like when I was a kid. I could walk up and down the high street in ten minutes. There were no shopping parks or malls. In fact the only supermarket I can remember was Liptons and it was about the size of my flat. And there were no down and outs. Not a one. I was sixteen before I encountered my first dosser and it had a tremendous effect on me. Now they’re as much a part of the cityscape as pigeons or, as you say, seagulls. We get a few round here—the Clyde is only a couple of miles away (nothing to a bird)—but the seagulls I remember are the ones from my childhood. My mother was animal daft. She was convinced every single creature that crossed her path had either been mistreated or was starving or both. Every day she’d put of bread for the birds and fret about the starlings and sparrows, bullied by the various seabirds, and not getting their fair share. Oddly she never asked my dad to set up a bird table. I did as a kid and sat glued to the window for days watching the local birds completely ignore it.