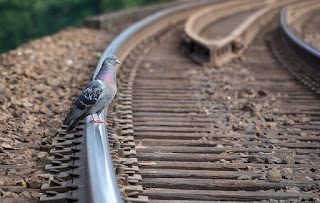 I’m sitting on a train heading for Dublin. It’s as good a time as any to write this week’s post, in long hand for a change. It feels nice to scribble. People around me are wondering what I’m doing and probably thinking ‘Damn but he writes funny.”

There’s a game I play sometimes on the train, when the pages of the book have become heavy and when the iPod is out of good ideas. I call it ‘Find the Wild Thing’.

This Westport to Dublin train passes through some virgin territory and the wild things that live out their lives along the track don’t ever seem to be too disturbed by it. So I keep my eye out, to see what I might see. It’s not as if every field or scrap of frosted bog is teeming with untamed creatures. Far from it. It’s just, now and again, and with an almost-reliable regularity, there will be some wild thing to see. Some rabbits, perhaps, or a fox, or some unidentifiable bird of prey hovering over a copse of trees.

It bemuses me sometimes how we tend to group the entire world of wild things into an entity. I suppose it’s sort of tidy. ‘Mother Nature’ is beautiful but harsh and cruel too. I’ve never really gotten that concept of ‘Mother Nature’. For me, every life is a thing in itself which will live out its own story. That story may be good or it may be bad. More often, it will be a cocktail of both. If the rabbit gets taloned by the hawk, it’s not the fault of anybody’s mother. It just is.

‘Mother Nature’ is one thing but this is the first time I ever remember us doing it with a year.

2016, the narrative suggests, has been an absolute monster in many respects. It has claimed our beloved heroes in apparent droves and elevated apparent fools to higher places. It has been a malevolent entity in our lives, smiting us and scarring us and, in a few short weeks time, it will be gone and good riddance.

But this habit of even expressing the year as an entity, it can colour a view. The notion of 2016 as an evil that is about to pass may be a comfortable one but it can mislead you. The bad stuff won’t stop just because another page on the calendar turns. People will be no less likely to come to harm when that six becomes a seven. All the bad things in the world will be no less bad after Christmas fades.

But, on the positive side, 2016 has not really been an angry beast wreaking considered havoc upon our lives. It has simply been another year. No more and no less.

I think that many of us, myself included, are too plugged in to the world.

I said it here a few weeks ago. We must be alive to the horrors and we must do what we can to lend our hand toward making things better. But…

I remember an image that appeared in the Radio Times (of all places) about thirty years ago. It accompanied an article that posited on future technologies. The article predated the Internet and all such things. The image showed a ‘Thing’. Something that was perhaps once a man. It was naked and hairless, twisted and deformed, and it lay on a floor with a myriad of wires and cables connecting into it. This ‘Thing’ was receiving input from everywhere directly into its body and into its brain. Laid writhing on its gleaming floor, this ‘Thing’ had been made terrible to behold, solely as a result of its level of access to information.

We are too plugged in to the world.

I fear that many of us may define our 2016 by the things that came down our wires and into us. When we think of the year, we will think only of the wonderful artist who, alas, left us, or the 'gaslighting' businessman who made us think, erroneously, that our world was finally over.

The wires that now connect into us are not good conductors of positive energy. Some good comes through but it travels sluggishly and decays quickly. Negative energy seems to only gain power as it travels from one port to the next.

To find much of the good in our lives, we have to look out the window and see the real world again. We have to see the wild things – the good things – that live out there, outside of the wires.

And I will remember Aleppo

But I will remember good things too. Great things. Wild things.

Some of the things I will remember are too personal to relate here. But here are two memories I will carry from 2016 for myself.

One evening in March, I stood in the theatre lobby. Through the closed doors in front of me, a full house buzzed and waited. Behind me, a full cast of teens itched to go on. As I stood, nervously taking it all in, the Director of The Linenhall, my friend Marie, came up to stand beside me, ready to go on and deliver her ‘pre-show’. In the theatre, the music changed to Aretha singing 'I say a little prayer for you' and, with everybody waiting to do their thing, Marie and I had a little boogie…

One evening in October, after a time of repeated disappointment and ache, the hand of one of the members of my son’s Favourite-Band-in-the-Entire-World extended from the gloom of their tour van and beckoned him to come inside…

If I had one word of advice it might be, ‘Don’t blame the year’. As 2016 winds inexorably down, perhaps turn your mind, even briefly, to some of the good things that happened within it, regardless of how small they may seem. Put them in a place where they won’t get lost in all the static buzz of the wires.

And keep them safe.

I'm big on order, Ken. There's nothing in this world I love more than two columns of figures that add up. I get a real kick when that happens. Order—or, I suppose more specifically, patterns—is something we look for instinctually (and probably instinctively). I talk about it all the time in my writing which is why the inkblots became the pattern for my book covers. We naturally group things. No one points to a field with a load of sheep in it and, "Oh look! there's forty-seven sheep"; they see a flock. Years are simple ways of grouping facts together. In one respect they're arbitrary but because we all agree our years should start on the first of January and not our respective birthdays it does make comparisons easier. I could ask you how your fifty-first year on this planet went and compare it to mine but can you imagine how hard that would be? Ask me how my 1973 was and that'd be a different ball game.

From a writer's point of view personification's a great tool. I loved the concept behind the film Inside Out, for example, in which emotions are presented as distinct characters. I can just imagine the entity in charge of 2016 being called on the mat before the Universe to answer for his gross mishandling of the year. Queen Elizabeth referred to 1992 as her "annus horribilis." Wonder what she'll say this year. Not that I listen. I used to but somewhere along the line I got out of the habit.

Around this time in 2015, I looked at my reflection in the mirror and made a decision to get back to my first love, music.

I did that and 2016, for me, was a year of learning and joy which led to teaching and even more joy.