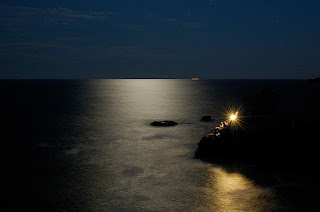 Some of the most vibrant memories are of the things we did in the night. One late summer’s evening in 1984, a few short weeks before I finally left for London, we cohort of friends sat in the pub and contemplated the bottom of our drinks. It was an unusually nice night, weather wise, for a Friday. So what to do?

There was always the Late Show over in the Gaiety. It would start at about 11.30, just as the pub was throwing people out. That was often a good option. A muggy place to go that wasn’t home.

It was just that this night somehow felt like more. Something a bit bigger was required.

“Let’s go fishing.” Whose idea was it? I can’t remember.

“Let’s go down to the sea, to the beach, and go fishing.”

"That's kind of the point."

We often went to the coast during the day, out onto the rocks with our rods, hauling in mackerel and Pollock in the bright glittering sunshine. We had never gone at night though. We had never even thought of it.

It was after midnight by the time we had got some stuff sorted. Rods and reels and something from the fridge to use as bait. I had Dad’s car and was driving. I hadn’t had a drink because I never did back then. Everyone else had supped a little though, nothing serious.

What was it, a twenty minute drive down to Streedagh Beach? We pulled up at the edge of the sand and killed the lights. It was dark, then, really dark and we just sat for a while to see if our adapting pupils could pick some modicum of brightness off the place where the sea should be. As we sat and waited, a little edgily, 'Careless Whisper' played on the radio. I remember that well, it helps to place the moment in time.

Across the beach with flashlights. Accustomed eyes could make out the rocky outcrop which was our destination and the white caps of the smallish waves. The sense most accosted was that of smell. Stranded seaweed and salt lay firm in the nose and on the lips. The torches cast stray beams across the beach as we trudged across, giving the impression that always, on the outer periphery of the beam, something was scuttling hurriedly away.

The potential of dropping a baited line into the darkened water. In the daytime, one can sense the silver mackerel skitter below the surface. At night though, that same sub surface area seems ruled by darker tentacled creatures and sharp toothed scaly demons.

A reel soon buzzed loudly in the dark. Something had been snagged from the deep. The bounty was hauled in, the flashlight danced around.

It wasn’t a shark, it was a Dogfish and it had indeed got Shane by the foot. Both were eventually freed of each other and the fish allowed to slip back into the black water. Its skin scratched like embedded sandpaper as it trashed away.

After an hour of Dogfish catching, for it was they who ruled the deep that night, things started to crawl out of the rocks, perhaps attracted by the provisions we had brought. Crablike, shrimplike, spiderlike things that emerged, Indiana Jones fashion, from ever seaweed laden crevasse. That was the end of the fishing trip, it had become too strange to stay.

Back in the car, shivering, damp, salty and home. On the night, it might not have been all that much of a night. But memory adds grit and shell fragments to it until it becomes a much greater thing than it ever was at the time.

It’s like that, isn’t it? Small things we do can grow big in memory. Just so long as they are something different, something new.

I’ve never fished at night. I did fish for a while and by ‘fish’ I mean stand on the jetty or the riverbank with a fishing rod in my hands. I only ever caught one fish and it was the first time I tried with a line of thick orange gut, a bare hook and a mussel or clam (never been very clear in the difference). After my initial success with the gut I talked my dad into getting me a proper rod which he did—and, of course, one for my wee brother—and from then on (until someone left the rods on the top of the car and we drove away and they were lost) we went fishing every weekend. Mostly it was down the harbour—we’d march off to the bait shop to buy the coolest-looking fishing flies we could afford with no idea how they worked and then off down the road with our tin of worms or maggots having progressed from molluscs. Sometimes Dad would take us to Troon. Once at least his friend Sam who was an experienced salmon fisherman took us to a spot on the river where we also sat for hours and never caught anything. It never really bothered me the not catching. I liked the fiddling with rods and stuff. Wouldn’t take it up again if you paid me. It lasted a couple of years—I’m guessing—and then we moved on to other things, fossils I suspect.