In Among all of the Fleadh 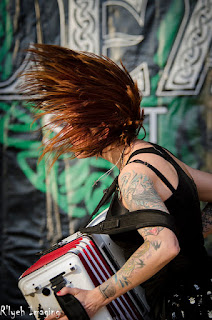 We went to Sligo yesterday, my old hometown.

We went to see family who were visiting, converging from all sides, and also, in a happy coincidence, because the Fleadh was on.

To the uninitiated, and I would almost count myself as one of those, the ‘Fleadh’ is the Fleadh Cheoil na hÉireann or, roughly translated, the Music Festival of Ireland. As the website says, “it is the largest single festival of Irish Music and can reach attendances of 400,000 over the course of nine eventful days.”

Yesterday was quite the spectacle. The streets were thronged with people, prominently families, milling around. In fact the first impression was one of nothing but people. People with no object but to ebb and flow around the streets and nothing else to do.

But you’re not in the throng for long before the music starts to get you. In every corner, in every doorway, there is a person or persons, sitting, standing, perched, making traditional Irish music. There are tiny kids, frighteningly adept in their casual musicianship, and there are grizzled old people. There is also everything in between, from the most wildly exotic to the most boringly orthodox.

Behind the scenes, in the quiet halls and churches and schoolrooms of the town, serious business is being carried out. Earnest competitions are being held to decide who are the best musicians of the best, for this year at least. Pipes and harps and accordions and flutes and violins are all doing battle in the dusty halls. But really it’s out on the streets where the heart and soul of the Fleadh stays beating furiously.

One forgets how festivals smell. We remember the look of them because we see them on the telly but the heady smoke and burger meat concoction has be relived to be remembered. We milled around with the rest, not indulging heavily in any way. Skimming the surface of the event. At first, at least. The thing with the Fleadh is that it slows you down and, as you slow, so you sink below the surface tension and become a little more immersed. Knees, hips, waist, the Fleadh can draw you down nicely until, before you know it you are right up to your neck in it.

It was the best of fun. I think it’s happening in Ennis next year. You should go.

There’s a lesson to learn everywhere and in everything. At the very least there’s a lesson of which to be reminded. Yesterday, in the midst of the O’Connell Street melee, there was a girl playing a squeezebox, accompanied by a rather detached youth with a guitar. Nobody was listening to her but still she played on. I stopped and listened.

A slow air, a bit melancholy. I could hardly hear it what with all the surrounding din. But then, gradually, I could hear it. And in a few moments more, I could hear nothing else. There was only me and the slow air. Even the girl and her surly companion were gone.

Then it was over and I thanked her (she looked bemused) and dropped a euro coin in her case.

That's the lesson. The reminder. Even in the wildest of wild moments, we can find a quiet spot and, in it, discover a moment’s peace and calm. Then, when we come back out, everything might be a little better than it was before.

Enough. Let’s have a dance!

I suppose our equivalent would be World Pipe Band Championships or maybe Celtic Connections. Carrie and I went to the pipe festival once when we were living in the Gorbals and the championship was just across the river. I have, I have to say, no great love for the skreels and drones of the bagpipes—they lost any charm they might’ve held for me many years ago—and yet there was something compelling about seeing so many pipers in one place, an unexpected power like when you hear a symphony orchestra perform a piece of music you thought you knew well from listening to LPs and tapes at home. I’ve really not been to nearly enough live events in my life and it’s something I regret, maybe eight classical concerts, probably about the same number of plays, one rock concert and the aforementioned pipe bands. I was in a small pub once where there was a band that played a couple of Cult covers: ‘She Sells Sanctuary’ and ‘Rain’. They were good and very loud. I immediately went out and bought Love. Street musicians, of course, are commonplace in Glasgow and I’ll have seen more buskers than anything else. Not too many pipers in Glasgow for some reason—they were commonplace in Edinburgh the last time I was there but that was nearly twenty years ago and maybe they’ve all vanished from there too—but I can’t say I miss them. Much rather hear someone murdering ‘Wish You Were Here’.