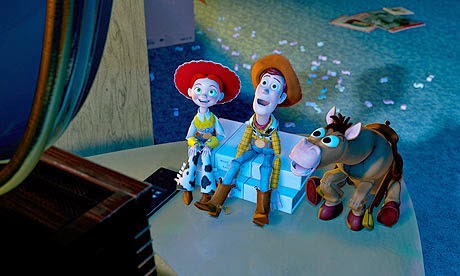 Alex on Twitter mentioned Toy Story 2 the other evening. He just said how his young daughter was loving it. That got me thinking about when I went to see it and what it means to me.

My life and the movies I see are always inextricably tied up together. If I want to evoke a certain era or a place, the best thing I can do is think back to the films I saw around that time. This is like a tiny key to my memory casket. The film comes back and other things come back too.

When Toy Story 2 hit the cinemas, Trish was heading off to London for a day or two and so it was just John and me whiling away the weekend together. I’ve checked online and, apparently, the film was released here in Ireland in February 2000. That would mean that John was very nearly four years old.

He really liked his Toy Story video and we had watched it many times over so I figured that this was as good an opportunity as any to give the local cinema another try. John had only been once before, with his Mum and some other Mums and pals. It hadn’t gone well. The film was called ‘Doug’s First Movie’. It didn’t make a major splash with the general public and it made less of a splash with my son John who, afterward, expressed the firm wish to never attend the cinema again.

This was hard on me. I never saw myself as the Dad who would be at the sidelines of the soccer match or the Dad who… did anything, really. Except go to the movies. I was Movie Dad and to have a young feller who was not keen to go… It was hard.

So, with Trish in London and some level of anticipation for this particular show, we steeled ourselves, John and me and we rolled off to see Toy Story 2.

Memory One – The Usher’s Seat

There was a single seat, just inside the door. It was the seat where the usher would sit, back in the days when there would be an usher in the cinema. It was a solitary fold down seat, all on its lonesome.

“Let’s just try this seat here,” I whispered, in some desperation,  because John was not for staying, “it’s right beside the door so we can leave anytime.”

So we both perched in the little seat in the awkward spot. John heavy on my lap. Both equally nervous, for slightly different reasons.

Then the movie began.

And everything was okay.

After a while we moved from the usher’s seat, down to two more comfortable ones beside the aisle so we could still get out quickly if required.

We were okay for the whole movie. I watched it swallow little John up and sweep away all his fears and anxieties. It was a wonderful metaphor for Cinema itself and what it can do for us all when it is done right.

Memory two was a teeny tiny thing that I really should have forgotten by now but I haven’t and it still makes me smile to think of it.

When the movies are over, here in my town as in most towns, people move in to clear up the stuff before the next show begins. The soft drink cups, the sweet packets, the floor popcorn. They generally don’t wait until the credits finish because Multiplex time is of the essence.

At Toy Story 2 that afternoon, there weren’t many people in for the early show. The teenage girl who came in to do the floor popcorn really didn’t have anything to do except watch the credits with John and me.

And the credits scene in Toy Story 2 is funny.

And, because the film had been showing for a week or two already, the Floor Popcorn Girl knew the credits scene. She knew it off by heart.

That’s my memory. The Floor Popcorn Girl stood in the aisle beside our seat and she spoke the credits scene along with the movie. She wasn’t doing it for us, she was doing it for herself. And she was very good.

I particularly remember her doing Mrs, Potato Head’s monologue to Mr Potato Head as she packed him up with provisions.

“I’m packing your extra pair of shoes, and your angry eyes just in case.”

She did the voice and everything. Here’s a YouTube clip of that scene. It’s only a minute long and it’s good for a smile.

After that, John and me saw many movies together and, when Sam came along, we saw even more.

Our cinema-going is one of my delights and it has provided many fond memories. Just like the two I mentioned above.

I was also a movie dad. I’d’ve preferred to’ve been more but since I only saw my daughter every second weekend for most of her life and in a completely different town I never got to see her in plays or on sports days or anything like that. I suppose I could’ve made more effort but her mother never went out of her way to give me anything more than my legal due and so I never forced the issue. At the time I felt cheated. I still feel cheated. Thirty-odd years later I’m still royally ticked off about the whole thing. I didn’t have a daughter so I could be a part-time dad. But we did get to go to the pictures together although the only instance that jumps to mind was the time we saw Jurassic Park in East Kilbride and it was showing on every screen in the multiplex. Never seen that happen before or since. And I have to say we were both completely blown away by the visuals. Dinosaurs strolling across our screens that looked like real live dinosaurs.

I’ve never kept a diary. Never thought I had anything worth recording. But then you never know what you’ll realise was precious until it’s too late. I could look up on Google when Jurassic Park came out in the UK and calculate my daughter’s age but I’m not going to. It would be nice if I’d written down something at the time. What was the first film we ever saw together? I can’t remember. Again I could see what cartoons came out in the early eighties and that might jog a memory. [Changes mind. Does just that.] I remember seeing Return to Oz and The Care Bears Movie both from 1985 (so she’d be five) and The Never Ending Story from 1984 but nothing older than that jumps out. Can that be the first film we ever saw together? The last film we saw together, just the two of us, was Closer in 2004. It was supposed to be A Very Long Engagement but I’m not sure what went wrong and we had to pick something else from what was on that day and Closer was what we ended up going with. An odd daddy-daughter film I have to say.

I miss going to the pictures with or without my kid. It was such a big thing growing up. Every Saturday as children there we’d be in a queue outside The George with the manager marching up and down the line keeping us in check. But now I hardly ever go. The last time was to see Star Trek Into Darkness and I think I was either completely alone in the cinema or there were just two of us; I’m pretty sure it was just me, myself and I.

Jim, Jurassic Park seems like jusy yesterday to me. I saw it in Leicester Square and did what I often did back then, went in on the week before it opened and bought ten tickets for the first friday night and invited some pals along. We saw loads of films like that, way back as far as Ghostbusters and Gremlins.

Son's first film was Casper (1995) at the 1st multiplex in Bristol. He was 4 and sat, enthralled, throughout. Can't remember his 2nd film a few minths later, but it was watched in "my" cinema - home town, 2 screen flea pit. We (my parents, myself and Jake) settled down. Before the Dadadada...dadadada dadadada..da (Pearl & Dean signature tune) had even finished I was asked "Mummy, why is my seat hard and doesn't move? Why is the TV (screen) small? Why isn't the wind blowing (no air-con)?" "Well Jake, this cinema is really old, so it hasn't git those things - I used to come here with Nan and Grumps when I was little." "Oh, so it's *really* old....? I like it better than the big place." I have no idea why this memory sticks...but it still makes me smile, and wish for more innocent/less technological times. Another memory is myself, Jake and his Dad/my ex watching Lord of the Rings going to watch Lord of the Rings trilogy as they were released....Jake and I picking them apart (he'd read, I'd re-read) after each one, and laughing at his Dad when he cried when Gimli dies....! I miss going to "the pictures" with my boy :-(

This is the main reason why I wanted to have children. Going to the cinema, buying books, and generally doing wonderful things like this. Sadly it wasn't to be.

Merry Christmas, and all that, Mr Armstrong, sir.