A Good Year in Theatre 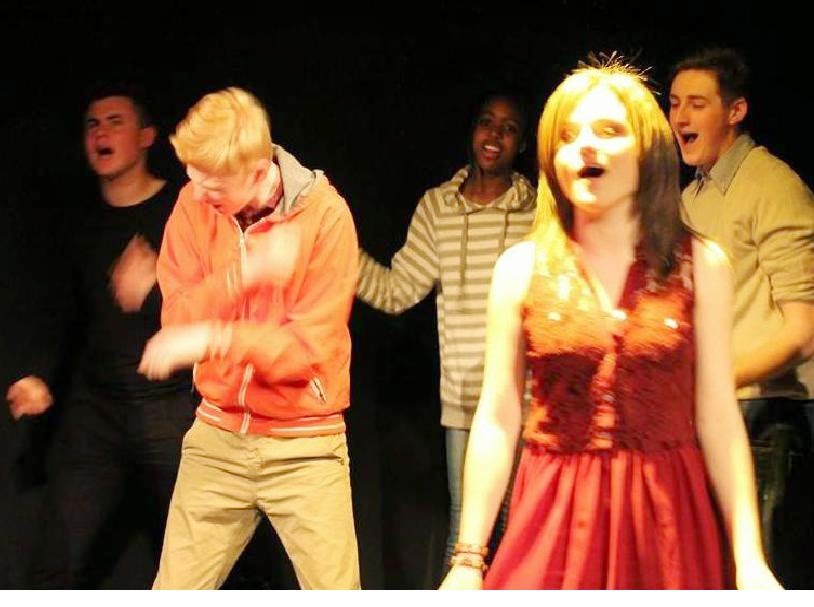 As the year runs down, I wanted to note that it’s been a good year in theatre for me. It makes me wonder if I shouldn’t clamp down on my rampant pursuit of every written-word medium and focus in a little on what I seem to be okay at.

But more of that anon.

The year started, as is did the year before, in Claremorris at the Fringe Theatre Festival. I had won it the year before with ‘The Doubles Partner’ and wanted to be there again in 2014.

I wanted to do it again for the fun and the drama but also, importantly, to be able to work with my friends, Donna, Tara and Eamon to put a new play together and show it to the Fringe. The play for 2015 has just been submitted and I would like to be able do it all yet again, one more time, if possible, but the competition will be stronger than ever, I know, and first we've got to get in. We’ll see.

That’s how ‘Dance Night’ was created. We didn’t win at the Fringe but, in my mind, we won everything that mattered to me. We won the audience and we won the polishing of a new small play which I have come to be very proud of. Dance Night went on to be performed at the Irlam Fringe Festival, a lovely event which gave me an excuse to return momentarily to England for the first time in fifteen years. This was a lovely production which had the desired effect of reducing many to gentle tears. Success! I hope and believe that the Irlam Fringe will return for 2015 under the guidance of Jane McNulty and I recommend you keep an eye out for it.

While all this was going on, my teen play ‘Midnight in the Theatre of Blood’ had been put forward by the National Association of Youth Drama as one of three New Stage scripts. That meant that interested groups could take on the play, with the royalties covered by NAYD. Two new productions resulted for 2014 and I had the very best time travelling to see them and making new friends. First up was MAD Youth Theatre Company in Dundalk. This was a joy for me. I got to sit in among the audience and nobody knew me from Adam. I loved hearing the laughter and the sighs but most of all I loved the astonishment of the young group around me as they watched their friends and peers being so astonishingly brave and uninhibited on the stage in front of them.

Onward, a little later in the year, to Kildare to see ‘Midnight’ done by Griese Youth Theatre and the cast of the MAD production came too! This was another extraordinary production, imaginative and bold, and some gender swapping of characters opened my eyes to some new possibilities for the piece. A great show – two great shows – I drove home happy and fulfilled each time.

As if this weren’t enough, my pal Oisin Heraty brought‘Conception, Pregnancy, and Bert’ to Clann Machua Drama Group in Kiltimagh an they took it on, head on, and toured the One Act Festivals with it. This play was originally a radio play, written for and recorded by St Patrick’s Drama Group in Westport a good few years ago. The play is silly and a bit of fun and Clann Muchua brought all the energy and commitment required to carry it off, not to mention a series of eye-popping set changes. I followed along and saw them play in quite a few venues and, each time, the audience were clearly having a good time, as was I.

This was the icing on the cake of what was, for me, a good year in theatre.

As I was alluding to at the outset, I start to wonder if I should focus my energy more exclusively to writing for theatre, if that’s where the fun and fulfilment can be found for me. My other pursuits, in TV and prose, took a lot of energy this year and singularly didn’t bear fruit. Should I draw a veil and just do what I seem to be able to do?

Well, no, I don’t think so. While I would love ‘The Break’ and the opportunity to not have to work full-time while writing into the night, I also need to write wherever my heart and head take me. And that might be a short story, a blog post, a film script, a TV notion, a radio play or ever a novel (again).

I think if I start to make it about the ‘result’ and the ‘success’, I might lose whatever impetus makes me sit down and write stuff all of the time.

This is my life, I think. To never be a true writer in my own head but to still be able to reach people and sometime touch people with what I write.

Who knows, maybe next year will be a good year in Radio or TV or… something.

Let’s see how it all plays out.

A true writer? True, in what sense? Are we talking about the difference between an author and a writer? I was always led to believe—at least Shakespeare led me to believe—that “[t]his above all: to thine own self be true.” When I think of you I think of Ken-the-writer. I know you’re Ken-the-dad and Ken-the-bloke-who-carries-umbrellas, Ken-who-used-to-live-in-London and Ken-frae-Castlebar but to me you’ll always be Ken-the-writer. That is who you are. The rest are things you do. If you stopped living in Castlebar you’d still write. If you lost your umbrella you’d still write. If your entire family bar you was lost in a freak tornado that landed on your house while you were walking home from work you’d still write. There are writers out there who manage to produce what people want and when they want it and good luck to them. That’s not what most writers’ lives are like. I’ve been reading a lot this year as I think I’ve mentioned and writers from all over the world most of whom I’ve never heard of and you probably won’t’ve heard of either and yet they’ve lived writers’ lives churning out books and plays and what-have-yous because that’s what they had to do.

I’ve been thinking a lot about my own writing and the lack thereof. I know you’re a big fan of my blogs but I really feel that all the time I’ve been spending online over the last seven years has done me no favours. I never ache to write. I miss the ache. I hate the ache, of course. But you need the ache if you’re going to write something good, the awareness that there’s something in there desperate to find its way out and it’s up to you to find the way. I’ve long been aware of the dichotomous nature of writing, the me-that-writes versus the-me-who-gives-the-me-that-writes-the-the-good-ideas. I do wish he’d give me a few commercial ideas but I’m not in control of the ideas. When I do try to do it alone I can produce something adequate but it’s never brilliant. But mostly the public is happy with adequate. I sometimes forget that.

I wonder how many true writers are successful. It can be done. I’d like to think that Neil Gaiman writes what he wants how he wants and just happens to be lucky that people like what he does. Terry Pratchett too.

Thank you Jim.
Ken the Writer.