Some Thoughts on Bullying 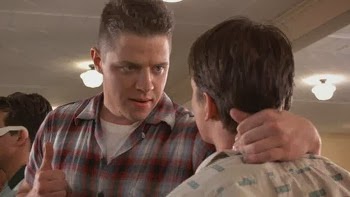 I was lucky enough not to be bullied as a kid.

It wasn’t that I was tough or that I could take care of myself or even that I was too crazy to consider messing with. I just got lucky. I dodged those bullets.

For that reason, my thoughts on bullies and bullying have, for many years, been shaped almost exclusively by what I have seen in the movies or read in books.

Bullies were bad guys who reveled in their badness. They had dominance in some way over others. Maybe it was physical, maybe it was mental. Whatever it was, they used this dominance as a weapon against those who were deemed to be lesser than themselves. They made life a misery for the people they turned their attention to and they loved every goddamn minute of doing it.

I saw these guys all over the movies. There was Biff in Back To The Future, for instance, or Draco Malfoy in Hogwarts, or that blonde jerk from The Karate Kid. There was also Nelson on the Simpsons and Bluto from Popeye. Bullies all.

And, yes, sure, there were bullies like that in real life. Even if they didn’t get to us in school, we still knew who they were and we knew to keep clear of them.

So, yeah, I thought I knew all about bullies. I had them sussed.

Until I found Social Media.

I don’t follow any bullies on Twitter or Facebook, at least I don’t think I do. But, now and again, you can get a hint, second or third hand, of something going on. Somebody has released a little blood into the water, unwittingly, and some sharks have come to circle. If the sharks butt a little harder, some more blood may leak out and than even more sharks may come. Somebody has displayed their weakness and suddenly, as Tom Waits might say, there is ‘Chicken in the Pot’.

People can get themselves bullied on Social Media, of that there is no doubt. What it has meant for me is that I have finally got to see a little bullying at close range. No longer do I have to rely on movies or cartoons or comics to show me what I think a bully should be. Now I can see for myself.

It’s taught me a thing or two about bullies. I would imagine these things are obvious to many of you already. That’s what this blog has become; a record of me discovering obvious things for myself. So forgive me if I am stating the blindingly obvious in what follows. As Hamlet said, “Meet it is I set it down.”

Bullies Often Do Not Know That They Are Bullies: I see this on Social Media and it surprises me. People cannot impose themselves on people with their fists or their feet or their heads. They can only use words and threats and insinuations. But these too can be brutal weapons and they can cut and bruise and damage as effectively as any boot. The difference is that, here, on Social Media, the hurt cannot be seen. A person lashes out into the darkness of the Internet and he cannot know where he has connected or how much damage he has done. Without knowing, he hits out again, harder and harder, mistaking the silence on the other side as resistance rather than pain. Unbeknownst to himself, he becomes the bully. He might even be shocked if he ever realises the truth but that will not change what was been done.

Bullies Are Often Convinced They Are Right: In the movies, the bully knows he is a ‘Bad One’ and he loves it. The bullying I have seen, at second or third remove, so often comes from people who are convinced they have right on their side. Maybe, sometimes, they do. But the fervour with which they pursue their cause can blind them to the hurt they are dishing out, the oppression they are dealing. They see themselves as being in the right and that is all that matters.

Bullies Get Exponentially Worse in Numbers: This is the most obvious one. Even I spotted this one. Bullies back each other up, they make each other worse. But you have to see it in action to really understand it. You can hear about sharks in the water, when that bucket of blood is poured in, but you have to see it to appreciate the harshness of it. To know the mindlessness and the ferocity of what can happen when a group of like-minded people fly in really hard together against someone they do not know.

Bullies Are Not So Easily Stopped: It’s an important consideration. We have to stand up to bullies. Especially the ones who really don’t realise that’s what they are. But we have to be warned too. In 'Back To The Future’, Marty’s Dad hit Biff one tremendous haymaker and, by that single act, the bully was defeated. After that one act of resistance, the bully became a car-washing simpering loon, completely in thrall of the person who stood up to him.

The movies have taught us that bullies are cowards and that we can stop them cold with just one brave stand. Perhaps that's a thing that actually happens sometimes, like True Love or a Huge Lottery Win, but not usually. Usually we must expect that there will be blood before the fight is won and that, more than likely, much of that blood will be ours.

That’s not to say we shouldn't stand up though. As much as it may hurt, we have to stand up.

Perhaps the hope lies in that first point. That many of the bullies we see on our computer/phone/tablet screens do not actually know what they have become. Perhaps if we hold a mirror up to them, show them their behavior and how it looks from the other side of the Internet…

Perhaps then some of them, at least, may learn.

I was a big lad at school so it was rare for anyone to try to intimidate me, Ken, not that it didn’t happen and I remember hiding in the cloakroom the first day I went to the big school because I’d heard about the hazing that went on. One boy a year or two older than me had claimed me as the expression went at the time and since I expected him to be surrounded by his mates and it wouldn’t be a fair fight I decided the wise thing was to keep out of the way which I did until a teacher caught sight of me and kicked me outside. Nothing happened. I doubt now the boy even remembered what he’d said he was going to do to me and as far as I can recall none of the first years got mistreated; the rumours were just that.

I have been bullied as an adult though. It’s something I don’t talk about for a number of reasons but I suppose the main one is embarrassment. Bullies go after the weak and when I was in the midst of a severe depression one took advantage of my good nature and I literally ended up packing my bag and running away terrified (and that is not too strong a word) that this guy would make good on his threats and since he couldn’t come after me he’d take things out on my family. Nothing bar a nasty phone call transpired but for years I worried that he’d track me down just out of badness. There’s no greater fear than the fear of the unknown.

How I got myself in that situation is simple enough to explain. In the midst of that depression I walked out on my life, ended up in a guest house with a bunch of characters I’d never have associated with under normal circumstances and one of them recognised a soft touch when he saw one. Online much the same can happen. We imagine the people we associate with are not unlike us and so when they behave in unexpected ways we’re completely unprepared. At least I have been. I’m lucky in that I’ve encountered very little nastiness over the last six years but I’ve read enough about it about gangs picking on authors and blitzing them with bad reviews. It’s scary.

I think a lot of the time people forget that behind every avatar and screen name there’s a flesh and blood person with real feelings. Bullies are often cowards, yes, and if you get them on their own fine but mostly they travel in packs and I’m not convinced that belting one across the chops is necessarily the answer. This is the real world. If kids are making a noise in the car park outside my flat I leave them alone. They’ll go away in a bit. If I draw attention to myself Christ knows what evil I could be calling down on myself.

And if all that crap starts online I’ll just close shop and go away and write a novel. I’m just looking for an excuse.

Once again, Jim, your candid and considered response honours and adds value to my own words. Thanks mate.