Let’s Not Do This 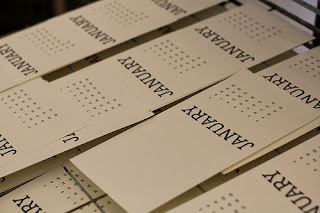 Let’s not do this. Not this year.

I’m talking to myself here, not you. You can do whatever the hell you feel.

It’s just a thing I tend to do at this time of year. This ‘Looking Back Wistfully and Looking Forward a Little Nervously’ thing. It’s a game I’d rather not play this year, if it’s all the same to you.

I think it relates to a habit of mine. Somebody once told me it’s a tiny bit OCD but I don’t know much about that. It's this; I always tend to ‘count days down’. I always know the moment when the midpoint, the zenith, of any timescale is reached and when the latter, downward, part of that timescale begins. It’s most noticeable during holidays like this one. We’re well over the midpoint of the Christmas Holidays now and descending rapidly back into ‘work-city’. Everybody know this but most, I reckon, are not as acutely aware of it as I am.

This whole ‘awareness of time and where one is in it’ thing can come to a head in this week of the year, as the old year ends and the new year_

The 'blogging' thing doesn’t help very much either. When you commit yourself to producing a blog post a week, you (well, ‘I’. Swap ‘you’ for ‘I’ in all of this) inevitably fall back on the ‘excessively introspective’ and even the ‘maudlin’ from time to time. It’s not necessarily a bad thing. It’s good to look back and it’s good to consider and mull-over and think about stuff.

It’s just not so good to do it too much.

And this time of year almost demands it of us, doesn’t it? The year is dying. One more year of our increasingly limited quota receding into the mists of history. Vanishing into_

This year, I would like to try to cast my vision forward rather than backwards. A new year is just around the corner. A year to be seized rather than gingerly grasped. A year that can easily be done better than last year, if I only try. There are obstacles, for sure, mountains to climb. (I sound like Diana Ross now) Some of them seem to be almost insurmountable from this current vista. But I know I’ll get there. (And now I sound like Chris Rea… damn!).

I think we spend too much of our time pondering the way we have come and the way forward. Better, perhaps, that we just travel the road rather than analysing what it’s made of. Onwards, fearlessly, into 2014. What will be, will be and it will be down to us to do the best we can with it.

So bring it on!

That’s it. Now don’t use a bloody hourglass as your image for the top of this post… okay?

I’m not sure that pausing every now and then and reflecting is necessarily a bad thing and ends of years are as good a time as any especially since most of us are on holiday and actually might have a few minutes spare to do some reflection. I’ve never been one for targets though. I know it helps some people to have a goal to work towards and it helps if the goal is attainable but the problem with attainable goals is that there’s the danger we’ll pace ourselves and exert only enough effort to attain that goal. Of course if we set unattainable goals then it’s easy to give up early and treat what we’ve achieved (which may well have exceeded any attainable goal we might otherwise have set ourselves) as a failure. When I worked for the civil service we had annual reviews as you do and part of said review was to set goals for the forthcoming year. I was always awkward about it. “I’ll do my best,” I’d say. “What more can you ask from me?” I suppose others didn’t do their best, did as little as they could get away with but that wasn’t me. My personal goal in every job I’ve been was to be the best, to become indispensable and I pretty much achieved that in every job I’ve done. There’s definitely a competitive streak in me. Which is why Carrie and I have never played a board game or broken open a pack of cards. Neither of us equates games with fun; games are all about winning.

This year I wrote a novella and a handful of poems. I’m not even going to count how many poems but it’s certainly less than a dozen. I’ve read nearly a hundred books—and reviewed every one of them either on my blog or on Goodreads—and that pleased me. I’m nowhere near as well-read as I think I ought to be. I feel I have an awful lot of catching up to do. I don’t do New Year resolutions but really my rest-of-my-life resolution is: Read more. Read better. When I think of how few books I’ve read up until now I’m mortified. I would like not to feel that way. Name a composer and I’ll bet I’ll’ve heard something by him and there certainly won’t be a major composer I’ve not heard as many of their works as I could lay my hands (ears?) on. I would like to say that about every important author out there.

Having no plans for the future is a bit daft but we’re not engineers, we’re writers. You can’t apply the imperatives of industrial output to the mystery of creation. Would I like to write another book next year? Of course I would! Stupid question. I’ve just written a long article on the Scottish writer William McIlvanney and when asked why he’s not written more in his life his answer is that he can only write from “compulsion”—the word occurs with him again and again. I’m the same. I have the tools sharpened and ready but I need a reason to write and that, much as it irks me, is in the hands of my subconscious.