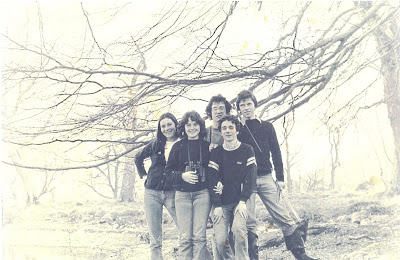 This is one of my favourite photos.

It’s me and my friends on Beezie’s Island, Lough Gill, County Sligo, Ireland. We were only teens then, as you can probably see. I’ve got my waders and a longbow strapped to my back. You’d nearly think I knew what I was doing with either of those things.

In my mind it feels as if we went out there often as teens, ‘Swallows and Amazons’ fashion, and that we grew up together there and learned great truths there. Not true, of course. The truth is that we only went there as a group a handful of times at most. They were good times, though, memorable times.

I think I felt that it was my place to show them. I was the one who knew it the best and I was the one who could sort out the boat to get us there. The others regularly showed me stuff that was theirs, this was kind-of mine.

As for me, well I went to Beezie’s Island quite a lot through the years but that was either on my own or with my family when I was a kid. Back when I was small, we would day-trip there with picnics. It was fun and there would be lots of other fishing families there too. I vividly remember getting caught there once in a lightning storm and sitting on the stony shore under an oilskin coat, watching the purple lightning fork down on the woods across at Hazelwood.

I’ve already written about an Island on Lough Gill. The most famous one; Innisfree. You can read about that by clicking here if you wish. It’s not a bad piece, even if I say so myself. W B Yeats' island is certainly the most famous island on the lake (if you can find it) but Beezie’s Island is, to my mind, far-and-away the best.

Beezie's Island is also known as ‘Gallagher’s Island’ or, in local dialect, ‘Gollacker’s Island’. All the names come from the one remarkable lady who lived there for so long, Beezie Gallagher. You can put the name into Google and find some good information about Beezie so I won’t go all encyclopaedic on her here. Suffice to say she lived a solitary life in a tiny cottage on the island in the middle of the lake. She rowed her boat to the Riverside (where I lived) to get provisions and to collect her pension. She was famously kind, welcoming, and good with wild things and pets alike. In the great freeze of ’47, the lake iced over and she became isolated on the island for so long that it was feared she would starve. A daring rescue was made, involving a flat bottomed boat with some men in it and other men tied to it walking behind pushing it. The idea was that the men on board would rescue the walking men if they were unlucky enough to fall through the ice. They found Beezie, alive but starving. Some of her beloved animals had already died. They brought her to shore on the flat bottomed boat and, when the thaw finally came, she returned to her home.

I never knew Beezie although my Dad, himself a great man of the lake, would have known her well. He may even have played a part in the ’47 rescue but I never got around to quizzing him about that. All that I know of Beezie is via told-stories and hearsay but I’d say the above sketch is true enough. Embellished versions would have Jumbo McCarrick whizzing fearlessly across the ice in a huge jeep to rescue Beezie in '47 but the flat boat account feels more probable to me.

The stories I know tell me that Beezie died on her island after an accident involving a small fire. She would have been over eighty years old and had still been rowing up and down the river weekly for her pension and her provisions.

Beezie’s Island is, in my opinion, the loveliest and most accessible island on the lake. It is like a ‘four seasons in one day’ island. It has everything in a few acres. Woods, wet lowlands, hills, hidden ruins, difficult to access parts. The best picnics can be had there, if you remember to bring the food.

Writing this makes me wish to go to Beezie’s Island again. To ease a rowboat into the shore, watching for the rocks which lie beneath the coppery brown water. To climb the hills that surround the perimeter and cross the reedy wetland at the centre up to the stone shell of Beezie’s house and further, into the woods, to the much older church ruins that date from God knows when. I’d suppose I’d best like to go there with my friends but that’s not going to happen. No harm in dreaming though.

I’m back in Sligo for a short while next weekend. Perhaps I’ll beg the loan of a boat from someone on the Riverside and just go. A few hours on the island might do me good.

In truth, I know I probably won’t go. There will be lots of things for me to do in Sligo and time will be short.

But I should. I know I should.

…and all that Jazz.

Hi Ken
A wonderful account of Beezie's Island. It was one of Mum's, your Aunty Mary's, favourite places to visit, sharing lots of lovely memories of trips up the lake. I cannot recall ever having visited, and have now added it to another very good reason to return home to my beloved Sligo, which I miss. The only thing I don't like about Sligo is having to leave.
Have a lovely time next week, and give my love to everyone <3

If you want someone to go with I would love to go i remember going with you and Shane on ascension Thursday 1979. It was a great day

I’m afraid I’ve nothing as … I suppose ‘romantic’ is the right word here … to compare this to although I did got through my Swallows and Amazons phase although I lost interest in that by the time I went to secondary school. By then I was discovering the pleasures geekdom had to afford and spent most of my time inside or if I did go out with a mate it was to the railway yard where we’d sit in a brake van and drink whatever alcohol we could lay our hands on. All that’s gone now, replaced by a ruddy great Tesco. But we had the rifle range and the frog pond and the sand pits and stuff like that. And ruins. There were so many ruins to explore when we were kids. Not ruined castles or anything—Dad would take us to see those—but factories and houses and I used to love being in places-where-I-ought-not-to-be. I think it was here that I started to tune into Poetry in its purest form. Never knew what to do with the feelings but enjoyed having them. Museums are all fine and good but they’re too ordered and unnatural. I would’ve gone over to Beezie’s Island if it had been near me. I’d probably have needed to be encouraged into the boat—I’ve only been out in a rowboat once in my life and was terrified (not fond of water, me)—but I’d probably have gone just to satisfy my curiosity. Terribly curious I am and always have been.

Ken, that brings back so many good memories. We had great fun didn't we. Beezie's Island is a special place. If you go for a row indulge yourself in some of those fantastic memories.

W.B.Yeats was one of Beezie's regular visitors and I believe that his most famous poem
, 'The Lake Isle of Inishfree' was inspired by Beezie. It was the only occupied island on Lough Gill but 'Gallagher's Island' was not very poetic so Willie Yeats used the name of the next island on the lake, Inishfree. Beezie's story first came to light when a lady journalist with The Sligo Champion, Gertrude O'Reilly, a Ballina woman, visited Beezie and wrote about her and her life. Gertrude is still very much alive and living in Enniscrone; she also covered the re-interment of the poet's remains back in 1948 when they were brought back from the south of France to Sligo.
L.O'R
13/06/2015.

W.B.Yeats was one of Beezie's regular visitors and I believe that his most famous poem
, 'The Lake Isle of Inishfree' was inspired by Beezie. It was the only occupied island on Lough Gill but 'Gallagher's Island' was not very poetic so Willie Yeats used the name of the next island on the lake, Inishfree. Beezie's story first came to light when a lady journalist with The Sligo Champion, Gertrude O'Reilly, a Ballina woman, visited Beezie and wrote about her and her life. Gertrude is still very much alive and living in Enniscrone; she also covered the re-interment of the poet's remains back in 1948 when they were brought back from the south of France to Sligo.
L.O'R
13/06/2015.