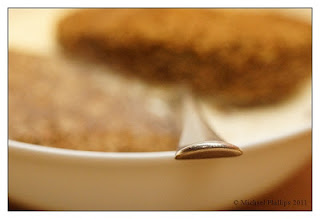 There’s lots of juicy confessional stuff in this week’s post so please brace yourself.

I eat Weetabix for breakfast. That’s the first confessional revelation right there. There’s worse to come. I didn’t always eat Weetabix. I used to do all kinds of weird things, like Cornflakes and Rice Krispies. Oh, yes, I have certainly lived all right.

But all that had to change. As the years trotted by, I had to start thinking a little about what I ate so I did what every right thinking middle-aged male will eventually do.

Yes indeed, I started eating Special K. I mean, every man aspires to glide up that azure pool in a one piece red swim suit… don’t they?

The ‘Special K’ thing didn’t last terribly long. To be honest, I found it to be pretty joyless stuff (other opinions are available) so I quickly moved on to the fancier Special K’s, the ones with berries and stuff in them. That was okay until I discovered that the box said it had 3% fat or 3 grams of fat (I don’t know) and that was 1% or 1 gram of fat (I don’t know) more than the boring Special K and that felt like too much even though, as you might have gathered by now, I really didn’t know.  Around this time, while avoiding someone in a supermarket aisle, I noticed that Weetabix was only 2% fat or 2 grams of fat (yes, yes) and that was the same as the dullest Special K while also being cheaper so I ran with that and have continued to do so ever since.

All you diet-experts can come and kick my considerable arse in the comments section if you feel you need to but, bear in mind, my dodgy nutritional information is not the point of the post at all, it’s just the preamble. The point is coming very shortly or at least I hope it is 'cos my fingers are getting a bit sore.

The point is, I adopted Weetabix as my breakfast weapon of choice and I’ve stuck with it. On the weekends I may treat myself to a sprinkling of muesli and honey (I warned you this was revelatory stuff) but generally it’s two Weetabix, a minimum quantity of milk, and Bob’s your maternal aunt.

“Great, fine, super”, I hear you chant, “we’re happy for you, Ken, but where’s the conflict? For this post to succeed as a story-telling exercise, you need to insert an element of conflict soon or you will lose us, mate.”

Fair enough. Brace yourself once again because here it bloody well comes.

My wife. Patricia. Have you met Patricia? She’s nice, she is. She likes a Weetabix too. Just now and again. She’s generally a porridge girl and, god knows, I love the hot sweet smell of porridge wafting through the house. I love it, just don’t make me eat it, that’s all.

So, yes, normally it’s porridge for her but sometimes there isn’t time for all that oat palaver. Sometimes something simpler is called-for. Something… Weetabix. I don’t mind Patricia dipping into my Weetabix. In fact I quite like it. I take it as a small compliment – my choice of breakfast is not totally risible etc etc.

Trish doesn’t like one Weetabix. Nor does Trish like two. She likes one-and-a-half Weetabix and that’s what she always has.

Thus has been born the ‘One and a Half Weetabix Quandary’ and lord knows it’s a biggie. I like two Weetabix, no more, no less, and I like them neat and presentable. Now, when I open the oddly old-fashioned paper wrapper of a morning, I am confronted with half – half -  a bloody Weetabix on the top of the stack.

What on earth am I supposed to do?

I could just have one-and-a-half Weetabix (but that’s not enough).

I could have two-and-a-half Weetabix (but that’s too much).

I could have two, by breaking another biscuit and also taking the existing half, thus leaving another half of Weetabix in the ‘Weeta-box’, but that goes against my in-built sense of cereal decorum and also leaves me with a smashed and dislocated breakfast bowl vista.

Then I stop and I think. Would it be better if I was here alone, waking every morning to a perfect alignment of Weetabix biscuits in my box? Would the silence, the loneliness, the lack of sheer fun be worth the maintenance of cereal sanity.

I think about that for a little while…

It’s a small example of those little sacrifices we make in our day-to-day lives together.

And as Elton John once quite-rightly sang, they’re no sacrifice at all.

The beauty of sacrifice! I know if I lived alone my house would be tidy all the time and on returning from work, my shackles wouldn't rise at the smell of fried onions. But if I lived alone, who would put a Turkish delight on my beside table when I'm on late shift to enjoy with my hot milk. Another lovely blog Ken.

My favourite breakfast cereal as a child was Sugar Smacks not I hasten to add the inferior Sugar Puffs. I was really upset when they stopped selling them. Special K was okay until they made the flakes bigger; they didn't work. Crunchy Nut Cornflakes piqued my interest for a while but I never tried Weetabix until I was in probably my forties. I didn't take to it at first because it went soggy quickly unless you dribbled exactly the right around of milk on it and ate them quickly. The Weetabix Minis were better in that regard. Kellog's Frosted Wheats were good too but I dread to think how much sugar they contained. Despite being a Scot I have never and will never eat porridge. Nothing that resembles wallpaper paste should ever go into ones mouth.

I do sympathise with your problem though. It would bother me. Carrie and I eat in very different ways. She's a shmoosher. I like my food separated on the plate unless it's a dish like Biryani where it's supposed to be eaten that way. I tend not to watch Carrie eat but if she did sit down to a bowl of Weetabix I'm pretty sure she would have pulverised it first. Me? I eat them from one end and work my way through systematically until it get to the other end, one at a time. What bothers me about Weetabix is that they never sit right in the bowl. Someone should invent the Weetabix Breakfast Bowl so that a regulation single serving (i.e. two Weetabix—sod this one and a half for a game of soldiers) can sit side by side and flat on the bottom of the bowl; perhaps there could be two slight indents. I have actually considered having the milk in a separate bowl and dunking in each spoonful to ensure that each one was bathed in precisely the right amount of milk before sprinkling it with the correct number of grains of sugar. Hard to do with the normal bricks but you could do it with the Minis. Now if only they'd only produce a Lightly Sugared Weetabix Mini variety.

These days I don't eat any cereal. I have a fruit scone (or a hot cross bun when they're in season), a piece of fruit and a handful of pills: blood pressure tablets, antihistamines, vitamins, minerals and garlic.

I won't tell you about my cereal preferences because I definitely couldn't write it as well as you.

I will just say that this is a lovely post. Perfectly balanced between funny and sweet. Delightful.

I thought I was the only one who suffered in this way. It's great to know that I'm not alone in my torment. On the outside I'm calm and smiling, but on the inside I'm screaming 'would it hurt that much to eat one more half weetabix?!'

Like you I've had to be the bigger man, and accept the small sacrifice of replacing the loose half bix. Until now.

A second solution has presented itself. Prepare yourself for a shock, this may sound a little radical but I promise it'll work. Just hear me out.

When you find a loose half weetabix in the packet... open another packet! Crazy I know, but think. The half bix situation will never get out of control, as when there are two loose halves you can eat them both as a whole one. Trust me, it adds up, I've checked my calculations. Twice.

With this mechanism everyone's a winner, and the whole and half bix consumers can live in peace and tranquility once more.

Unles you return to the Special K. Please promise me you won't do anything that desperate.

I never understand the %fat claims made by yoghurt or cereals because it's always going to be virtually nothing and it's just a nonsense. If you want to terrify yourself, check out how much sugar is added - I promise you the figure will alarm you. They should just label the aisle 'Fatten-up your kids here' and have done with it. For what it's worth, I find Oatibix or Shreddies are the least noxious in this regard.

Thank you Barbara. My regards to Mum in Law :)

Hello. Barbara again. I've settled the Weetabix fiasco, for the xmas period at least. I've had a recent visitation from my younger daughter who lives and works in a City 200 miles away,
and have been in receipt of a similar Weetabix related culture shock. "How many Weetabix have you got in that bowl?" I asked she.
"Three. I always have three. And a banana"
"Hmmm. While Granny's here at xmas do you think you could make do with two and a half?"
"Yup, I suppose so. Why?"
"To keep things neat"
See, I can't have Weetabix disappearing out of the box in a mish mash of unregulated fractions. I'd never sleep.

The interesting thing here, is that the daughter is somewhere around the eight stone mark, whilst granny is approaching double that amount. So it appears the more Weetabix you put away at breakfast, the thinner you get.
I shall have four in the morning!