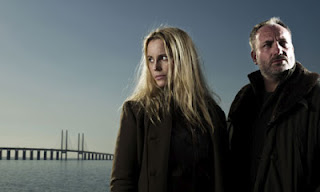 Oh boy, I’m going to annoy some of you today.

It’s a question I keep asking myself so I thought I’d ask it here on the blog, to set the thoughts down and see how they might look in black and white.  It’s not a deep moral question – mine rarely are – but sometimes the more trivial questions can lead on to the deeper truths.

Not this time, mind you, but never mind.

Why are we all watching Scandinavian Drama and, perhaps more interestingly, is it really as good as we all like to think it is?

Annoyed yet?  Hang in there.

Actually before I go on, I need to place myself firmly in this picture.  I love Scandinavian Drama.  Saturday nights, Beeb Four, I’m there with my can of beer, lapping it up (the drama, not the beer)  (well…).  So I’m not on the outside, looking in here, I’m on the inside_  you get the picture.

We recently finished watching ‘The Bridge’ and Patricia and I really enjoyed it.  This was more fun for me that The Killing if only because my wife stayed along for the ride instead of falling into a semi-comatose state within minutes of Sarah Lund appearing on screen.  So, yeah, we watched ‘The Bridge’ and Saga took a while to warm to and Martin was loveable but a bit of a dog and we thought we knew who did it but we didn’t really and it was all good.  When it was over, we looked at each other and we agreed that it had been good and then I went on Twitter and agreed that it had been good and then we met our friends and they had quite like it too (although don’t tell them the end cos they had Sky Plussed the last two episodes).  It was all good.  Roll on the second series.

Yes, but how good was it really?  Eh?

After it was finished, I got to thinking about an ITV Sunday Night series called ‘The Bridge’.  Two hours a week for five weeks.  We would watch it, sure we would, we would give it a good chance, but would we like it?  If it was the same story, the same script, the same quality of acting, would we similarly adore it?

I don’t think we would.

I think we would probably come to hate it.  We might find the characters over-simplified, we might bemoan the lack of sophistication in the script, the woodenness of some of the lesser character actors.  We might also worry about the promising sub-plots unceremoniously dumped along the way, the jarring tendency to incidental melodrama, the ‘Relationship 101’ approach to affairs of the heart.

You get where I’m coming from now.  You’re getting annoyed.  I can tell.  I'm like that kid, in the crowd, shouting at The Emperor, "Hey, I can see your willy!" (Which, in Scandanavian Drama, is often the case anyway).

But, remember, I like all this Scandinavian Drama, just like you do.  I’m on your side.  Hell, I even wrote a whole blog thing about The Killing over here.  So please don’t shoot me, I’m just asking the question.  Sit down again for a moment and let’s think some more about it.

The answer, as it often is, is simple.

That’s it, isn’t it?  It’s good but that’s not the main reason we migrate towards it.  We go there because it’s Different.  It’s a different world.  They speak a different language for a start but that’s only one thing.  All the actors are new to us, we’ve never seen them before, it’s like they’ve dropped from a different planet.  The landscapes are markedly different, cold and bleak and wild and cold and, oh, I said cold, and cold and cold and cold.

Even the doors open the wrong way for Chrissakes!  It is Different and that’s why we, myself firmly included, love it so much.  It’s good too, if it wasn’t good we wouldn’t be there, we’re not stupid.  But it’s not quite as good as we may think it is, it’s the Difference that makes up for that.

I think the subtitles play their part too.  Obviously they contribute to the Difference but it’s a little more than that.  They simplify things considerably.  You’ll have noticed that the characters on screen often seem to be saying much more than the subtitles are.  They use each other’s names a lot and the subtitles hardly do this at all.  My pal Jason Arnopp has written an enlightening blog post on the art of writing subtitles for film, here’s a link.  Everything is pared down to the quick.  I think this becomes an attractive aspect of the Scandinavian Dramas too, this simplification of the text.  We get the pure drama without the embellishment of the everyday nuances.

I loved The Killing and The Bridge and I’m loving Borgen at the moment (I’m late to it, I know).  Borgen is sharp and witty but it’s no West Wing for sharpness and wit, yet is seem almost comparable because it is so Different.  That’s a little illustration of my point right there.

That’s it.  Now I’ll just read this back and see how it sounds.

While Carrie was away in the States I watched a film with subtitles—two or three actually—but this particular one stands out because there were a couple of sentences in English and the subtitles ‘translated’ them and got them wrong. I thought that was hysterical. And it wasn’t just wrong it was badly wrong, as if it had been run through Google Translate a few dozen times, translated into six other languages and then back into English. I don’t have much of a facility with languages but even I know when the people are saying one thing but the subtitles are saying something else. I don’t fret about it. As long as I get the gist I’m happy. Books are a little different because all there is there are the words and I’ve been shocked on more than one occasion when I’ve compared two translations with the original text to see just how different they end up. The best example to look at there are the variety of translations of the Bible out there and how much is lost in the translation. The one that jumps out at me is the expression “reads in an undertone” which some Bibles reduce to “mediate on” and, yes, that’s the right idea but the point is the kings were to literally read the book of the Law aloud as a means of reinforcing what they were supposed to be learning. As a writer I get that.

As for different I see exactly where you’re coming from. It’s one of the reason I like to watch Australian shows because they’re one step removed from what we have here. Bad writing and bad acting are hard to hide though even with a language barrier. Look at the difference between the very faithful US adaptation of Let the Right One In. As I said to my wife had that been the only version I had seen I would have raved about it but having seen the original and struggled with the subtitles I could just tell it was superior. I don’t have the same problem with Kenneth Branagh’s take on Wallander because he is a fine actor but not having read any of the books I don’t know how well any of the three I’ve seen take on the role do. Subtitles do make us more forgiving because they act as a distraction and things we’d notice in English slip by because we are only getting the gist of what’s going on.

As Carrie was away when The Bridge ended we still have four episodes to watch. We also have most of Braquo Season 2 the first season of which out-spiralled Spiral and I would have thought that would have been hard to do; again with the French dramas the procedures are so different to here. We have the entire first season of Those Who Kill, another Danish drama, ready to watch some time. Look out for Varg Veum which I think I’ve mentioned before. We’ve seen a couple of the films (Danish again) and they were quite watchable. Oh and now there’s Sebastian Bergman which we’re taping. So much TV, so little time.

Ja, I think we're about to see a wave of distinctly average Scandinavian drama hit these shores. I have (half) joked elsewhere about the next big series to air on BBC4. 'Murdir ån Midsømer.'

Jim: I'm with you on Wallander. I really like Branagh in the part and I think they are beautifully made - I'm hoping for more. I never really got into the original ones, I've seen a few but never got hooked. I probably could if I tried. Of course we agree on 'Let The Right One In'. I love the original and think the remake has merit too. Varg Veum eh? (writes it down).

Fergus: We're bound to suffer the Diminishing Returns thing now, I guess. Killing 2 wasn't as good. The Bridge was fun though, I grew to like Saga.

I don't really watch crime drama at all (in English or other languages) but I did get drawn into "The Bridge" (as my him indoors was watching it). I think it was Saga who made the difference for me... it is still common for female characters in drama to serve very simple roles (window dressing, challenging stereotypes of window dressing...) and so certainly I always like to follow a female character who seems different to all the ones I've seen so many times before.

I did think the last episode of "The Bridge" was probably the weakest of the run and so the series did seem to kind of limp out a bit but that's true of so many things. It's hard to finish well!

Hi Rachel (Loved that Chim chiminee song earlier. Ta for that.) I think you would have liked series one of The Killing. Strongest of strong lady in that one. If himself hasn't seen it, consider a cheap ebay boxset. 20 slow episodes of darkness and mystery... you know you want to. :)

Not heard about the bridge, don't tend to watch much TV in real time but we do catch up usually after the fact. Really enjoyed The Killing, althought they did drag it out...must order the Bridge on your recommendation. We watched an excellent Scandinavian film last night called Headhunters ...well worth a watch. Big fan of Treme too Rachel - I just downloaded 'Ooh Poo Pah Doo' the other day as it stuck in my head.

Honestly it's hard to come across a worthy blog worth commenting on nowadays, the web is really too flooded. Adore this post, love your blog. Just thought i would let you know!

Hi Pat For all it's darkness, The Bridge seems to me to be a bit lighted than The Killing. There's a bit of Buddy-Buddy action going on. It's good though, I think you might like it.

Dear Anon Thank you. You may be spam, I know, but you've written it so nicely, I can't help but post it. :)