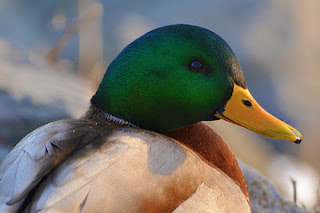 I like David Mamet very much.  He is, for me, the consummate playwright.  This week, I’ve been rereading one of his earliest plays, ‘Duck Variations’.  I’d like to read it aloud sometime with someone, I might get onto my old acting buddy Eamon and see if he would come out and play with me, 'have a little read-through.

‘Duck Variations’ is a two-hander.  Two guys sit on a park bench and watch the ducks.  They talk and sometimes argue about the ducks, their lives, and their relevance to their own lives and life in general.

There are fourteen ‘Duck Variations’ in all.  As with variations in music, they are all on the same theme (Ducks) but each takes a slightly different approach.

Given my policy of ‘blogging what I’m thinking about this week’, I thought I would mess-around-a-bit and try to write my own ‘fifteenth duck variation’.  Damn it all, if Harry Potter fans can do it, why can’t I?

Who knows, maybe David Mamet will come by and kick my sad little ass.

That would be cool, right?

George:  It’s been a while.

Emil:  It certainly has.

George:  We ain’t getting any younger.

George:  You must have something.

Emil:  The thing about the Ducks is.

Emil:  I got nothing.

George:  All this time?

Emil:  All those years.

George:  But that’s not bad, not bad at all.

George:  What you said.

Emil:  The ‘Having Nothing’?

George:  The ‘Duckdom’ thing.  Where have we heard that before?  When has it been spoken?

George:  Never.  That’s when.  It’s an original thought.  Right there.

Emil:  Are you sure?

George:  I have never been more sure of anything in my entire life.

George:  That would be difficult to believe.

Emil:  I was too shy to say, at first, but I feel encouraged now.

Emil:  To take the leap of faith.

George:  It’s inspiring, is what it is.

Emil:  Thank you.  You’ve raised me up to this place.

George:  In your own time.

Emil:  Well.  All right then.  The Duck, in one respect at least, is like the very antithesis of the Iceberg having, as it does, over sixty-six percent of its body mass above the water line at all times.

Emil:  What did you think?

George:  I preferred the first.  The Duckdom one.

Emil:  Is there a reason?

Emil:  You can count on it.

Anyway, check out the original. It's obviously better.

As a foot note, if you have a penchant for the art of two characters speaking to each other, you could do much worse than visit Jim Murdoch’s blog ‘The Truth About Lies’.  Jim uses his characters Aggie and Shuggie to ponder, in turn, each of the reviews his excellent books receive.  It’s a very funny device and very well done.  Click here for an example.

Very nice Ken, you nailed it. Mamet is my favourite.

Thank you Fergus. Mine too.

I’m not too familiar with Mamet, Ken. The first thing I thought of though when I read this … well, it’s basically a skit, I suppose, was Pinter and when I looked up David Mamet in Wikipedia to see what he’d done that I might recognise I noted that he dedicated Glengarry Glen Ross to Harold Pinter, who was instrumental in its being first staged at the Royal National Theatre in 1983, and whom Mamet has acknowledged as an influence on its success, and on his other work. I didn’t realise there was such a thing as ‘Mamet speak’ before today or maybe I did and just forgot; that’s more likely.

I don’t read many plays on the page. I listen to actors talking about being sent scripts and recognising immediately that they’re onto a winner but I find them hard work especially film scripts. A guy sent me one a while back to get my opinion on it and I just couldn’t get into it. It’s fine the way you have it—radio plays are fine—but, as I said, I get lost easily. That said I enjoy writing dialogue and I’m a little surprised I’ve only written the two works for the stage. Vladimir and Estragon are Dead you’ve read—I sent it off to a Glasgow director who was looking for stuff to workshop but I’ve never heard anything—and Living Will, which is actually a dramatic monologue for a young girl of about thirteen which I’ve never sent anywhere or let anyone read bar my wife and daughter (who I wrote it for when she was seventeen and showing an interest in acting); it’s basically Krapp’s First Tape, she sets up a video recorder in front of the audience and delivers a video will. I don’t think I’ve read it in over ten years so I couldn’t tell you how good or bad it is but I wrote it quickly at a time I was churning out short stories almost daily. Oh, to have another spell like that! In my novel The More Things Change the entire final section of the book—it’s in four parts—is in dialogue. Joyce did it a bit in Ulysses and I’ve seen Jeanette Winterson do it too. I don’t know why more writers don’t; one of the complaints about my writing is that people sometimes get lost in conversations and that would be one way of making sure that everyone knew who was talking.

Thanks for plugging the Aggie and Shuggies. I’d hoped to write a few more but been struggling to get buggers to review Milligan and Murphy. Maybe once we get the ebook out there I’ll get a few. It’s surprising how quickly some places are turning away from printed books.

Carrie and I used to write wee conversations. I can only find this one which I would imagine Carrie wrote:

Carrie: What're you doing?
Jimmy: Thinking.
Carrie: Can I join you?
Jimmy: Why, am I coming apart?
Carrie: No, that's not what I meant.
Jimmy: Then why did you say it?
Carrie: Because what I said can means different things. Words are allowed to do that.
Jimmy: Who made up that rule?
Carrie: God, I suppose. If it wasn’t him them it might’ve been Mom.
Jimmy: Were there not enough words to go round in the first place?
Carrie: I don't know.
Jimmy: I think that's very careless, to have more meanings than there are words.
Carrie: I suppose so. So, can I join you?
Jimmy: You want to become a part of me?
Carrie: No, silly. I just want to be with you. I've been apart from you and now I want us not to be apart anymore.
Jimmy: It's very confusing. I'll need to think about it.
Carrie: You’re very mean making me wait here.
Jimmy: See, you’re doing it again. Saying one thing and meaning another.
Carrie: I did not. Look if you’re not going to let me sit down them I’m going away.
Jimmy: I’m sorry.
Carrie: So you should be.
Jimmy: It’s just the world is a confusing place.
Carrie: I know. So, are you coming to my party?