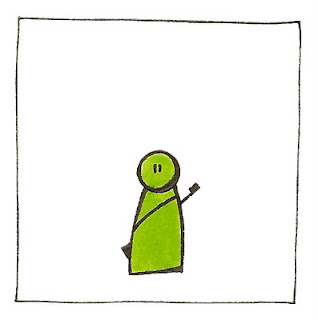 It’s hard, when you’re writing characters, to figure out what they will be like exactly.

Some of it is easy because the requirements of the story give us what we need to make the story work.  ‘If the guy is an Olympic Athlete he has to be fit’, that sort of thing, unless it’s a comedy… hmmm.

So, yeah, as somebody who believes that everything serves the story, I rarely have a problem deciding the basics of what my characters are like because the story has already told me that.

It’s those other little things.  The Traits, the ‘Foibles, the ‘Colouring-in’.

And we need a bit of colouring-in for our characters, I reckon.  Some things to ease them up off the page and allow them to throw a few shadows out in the real world.  Otherwise they’re in danger of being a little clichéd and a little bit flat too.

The trouble is, Traits and Foibles and such can easily be clichéd themselves.  He has a limp.  She cannot pronounce her ‘R’s.  It is green with an aerial on its head.  That sort of thing.

Where, then, does one find a good Foible these days?

Perhaps we should look in the mirror.

This week, I set myself a little task.  I challenged myself to look hard at myself and try to identify a couple of my own personal traits which might be odd enough to rise above the cliché and the commonplace.

It turns out it wasn’t easy.

I guess we’re so accustomed to ourselves, so comfy in our own skin, that we maybe find it hard to step aside and identify those moments when we do distinctive things.  It can help if you have kids because they can inherit some of your own traits and you can see them more easily in them than in you.  My eldest son, for instance, tends to hold his chin when thinking hard about something.  I never know I did that until I saw him do it.

Anyway, I found two.  Two traits that I have.  Maybe I’ll use them in a character sometime, who knows?

Trait Number One:  ‘Whistle While You're Irked’.
I do this.  I didn’t know I did it until I put myself on alert to look for stuff.  There is a thought process behind it.  I think, “I’m annoyed.  I don’t want anyone to know I’m annoyed so I’d better do something which shows I am not annoyed – I know, I’ll whistle.”  The tune isn’t important although a jolly irish reel, jig or hornpipe seems to be the norm.  The lesson here is, if you see me walking towards you and I’m whistling, better turn and run in the other direction.

Trait Number Two:  ‘If I Say It , It Will Come’
This is not so much something I do rather it’s an odd aspect of how my brain works.  This is true and it baffles me quite a bit.  I think it qualifies as a trait.  If there’s something in my head, some piece of information that I cannot access although I know for sure it’s in there, I can spend hours and even sometimes days trying to convince my brain to give up this information.  I can focus on it as hard as I like, I can ignore it as hard as I like, it won’t matter.  But the minute I ask somebody else for that information, out loud, it will spring magically into my head.  A simple example; “What is the name of that pub in Westport?’  (Think, think think, no joy).  Three days later, I ask my friend and, before I’ve finished framing the question, I know the name.  Thinking back, this is always happening to me but I’ve only pinpointed it when I went on a trait-quest.  I think I can learn from identifying this foible.  From now on, if stuck on recalling something, I’m going to ask someone else sooner – even if there’s no chance that they will know the answer.  I’ll report back to you on how I get on.

So, this exercise… has it been useful?  Will I now find it incredibly easy to come up with quirky and individualistic traits for my upcoming characters?

But at least I got a blog post out of it.