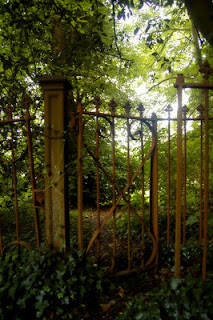 I feel like I am inside a story by Edgar Allan Poe.

There are two reasons for this and I’ll tell you about the second one shortly.  The first reason, obviously, is because I killed the Old Man.

Don’t get me wrong, I didn’t cut him up and hide him under the floorboards. Nothing so melodramatic. I smothered him with his greasy old pillow.  I smothered him until he was dead and I’m glad I did it.

He had me demented.  Literally, I think, because I wouldn’t normally have smothered anybody.  Well, I never did before and I don’t feel inclined to ever do so again. I think ‘Demented’ is fair enough.

It wasn't easy, either, the smothering of him.  I thought it would be easier.  He seemed weak and useless until I pressed the pillow to his gob but he livened up fairly sharpish then, I can tell you.  He bucked and kicked like a young horse in a field and he seemed to do it for the longest time.  One song on the bedside clock radio played right-the-way through and the next one had started before he finally settled himself down and died.  ‘Careless Whisper’ I think the second one was, although I was quite distracted.

He didn’t look quite-right then, after I had taken the pillow away from his face.  He looked shocked and anguished and I thought the Doctor might be suspicious of that.  So I tried to rearrange his face a bit.  That was horrible, the grizzled scratchy bristles on him and the saliva… ach!  It was all for naught anyway.  No matter what I tried, he seemed intent on holding on to the stupid expression he died with.

I had one good idea before I gave up.  I pulled his false teeth out and plonked them in the water glass by the clock/radio.  He didn’t look any better because of that but I think he did look a lot older and more likely to be dead.

The Doctor didn’t say much.  I told him how his breathing had become laboured and how I tried to rub menthol on his chest but it had been no use.  He looked at me intently for a moment when his examination of the corpse was over.

“Did you help him along the road, Molly?” he asked me.  The cheek of him.

“I’m sure I don’t know what you’re talking about,” I said, and the haughtiness in my voice was as real as you could like.

We left it at that then.

Oh, I was sorry I had to kill him.  He was my Father, after all, and he had been good enough to Mam and me in his day.  And I didn’t begrudge minding him when he got sick but seven years was enough.  He should have been thinking about dying by himself after seven years.  I had some living to be getting along with and – I know it sounds awful – but seven years into his sickness, he just seemed to have started to get in the way of all that.

It was just me and him in the house.  The Brother had gone to Manchester for work years ago and only rang when it suited him.  So it was Daddo and me, together into the long Winter nights.  I used to read him stories.  He liked the Poes, ‘House of Usher’ and such.  Maybe that’s where I got the idea for what I did.  Maybe not.

The last year was the worst, mostly on account of that phone.  The Brother came home in the Spring and bought the Auld Fella a mobile phone, of all things, so that he could ring him whenever he wanted.  A mobile phone!  I thought he’d never get the hang of something like that, stuck in the bed as he was, but I was wrong.  He took to it like a duck to water.

The worst was that he discovered texting.  Don’t ask me how.  He must have saw something about it on the telly, that’s the only possible explanation.  Anyway, he started texting me whenever he wanted anything.  I mean, it wasn’t like I was in Timbuktu or something, I was usually only in the kitchen or, God Forgive, the toilet.

“I need the commode.”

He needed a text reply too.  It wasn’t enough for him that you went and seen to whatever he needed, oh no, he needed to know you were on your way – even if you were only in the next room.  He liked getting texts, I suppose, and I was the only one left that he knew.

It became unending and very, very annoying to a poor girl who was only trying to do her best.

So I murdered him.

I believe that phone and its unending texts was at least half the reason I killed him with that pillow.  So thank your son for that, you old goat, him and his free phone.

He was buried two weeks ago, in the little family graveyard up behind the back garden of the house.  They’re all buried up there; Mam, Gertie, Jacob, Billy, Martin and Sean.  No, I didn’t kill any of them, just my Dad.

So, yes, I feel like I’m in a story by Edgar Allan Poe, as I was saying at the start.  The killing of him is one obvious-enough reason.  The second reason is a little odder…

Poe might not have wrote about it much but he used to do it, I think, and there was another story that Dad used to like me to read, ‘The Beast with Five Fingers’ by W. F. Harvey.  There was plenty of automatic writing in that one.

You know what it is.  It’s where you pick up a pen and your hand starts writing stuff without you knowing anything about it.  So, yes, I’ve started doing that…

Only not with a pen.

I've started doing it with my phone.

You think I’m mad now but I’m not.  There’s a lock on my phone that I put on before I put it in my pocket and that stops my hip from hitting buttons and ringing up numbers it has no business ringing.  We’ve all had calls like that, where all you can hear is someone puffing and panting along the road and you know it’s their keys or their wallet that’s called you rather than them.

Well the lock on my phone must have broke.  It doesn’t ring people up though.  That would be too normal for the likes of me.  No…

I know, I know, but it does.  It doesn’t send them to anyone, it just writes them.  It’s not strange or anything, it’s just the jiggling about that my phone gets in my pocket as I go about my chores.

The first text was unremarkable enough. It read;

I cursed when I saw it and resolved to take the phone into the shop to get the lock on it fixed or replaced or something.  Of course, I forgot.  The next text my phone wrote was much the same and the next and the next until I got used to seeing silly messages on my phone whenever I took it out of my pocket.

The message I saw on Tuesday of this week stopped me in my tracks.

I deleted it and moved on but it was oddly unsettling.  I couldn’t say why, not then.  I can now, of course.

The next message came soon after, on Wednesday morning.

I stared at that for a long time.  I eventually decided that the phone had also managed to switch on that predictive text setting that makes up real words for you.  That was the explanation.  I still stared though.

When the text beeped on Thursday, I looked at it with a little fear in the back of my mind.

“am coming for you.”

That settled it.  I had to admit it.  My subconscious guilt was writing macabre texts to me.  I had to get rid of the phone, that was the only way.

Until a few moments ago.

I heard it beep, you see, in the spare room where I threw it.  I heard a message come in and it couldn’t be one I subconsciously wrote because the phone was locked away from me.

I creeped into the spare room, lifted the phone and read

It was him.  He was texting me from his phone down in his grave up the back field and he was coming from me.  He was_

I rushed into his room.  It smelled of him still.  There it was, on his bedside table, his phone.  I picked it up and examined it.  No messages had been sent.  It was dormant, like himself.

So here I am now, sitting in my kitchen, Midnight Saturday night.  There hasn’t been any more messages since.  The phone is on the table in front of me, with the Whiskey.  He is two weeks buried tonight – a sort of anniversary.

The phone rings and I jump and spill my drink.  It’s not a text, it’s a phone call.  I guess that’s all right.

“Sergeant Mulcahy, at the Station, sorry to bother you so late.”

“A what for Christ’s sake!”

“What are you saying?”

“It’s your Father’s Grave. We got a call. It’s been disinterred… dug up_”

I cut him off and rush to the window.  The moon is in its first quarter and casts a faint misty pall on the frosty night.  The gate leading into the graveyard is closed tight, as it always is.

The text beeps.  I don’t want to see it but I have to look.

I look out the window again.  The back gate, leading from the graveyard, is swinging open and askew on its ancient hinges and there is a trail in the frosty path – a damp track down the cobbled way.

The phone sounds a text.

There is a knocking at the back door.  More of a scratching really.  Yes, that’s it, a scratching.

I suppose I’d better answer it.

An excellent modern approach to this. Thoroughly enjoyed it I have to say.

Thanks Jim. I'm very pleased about that.

Applause for the author. :)

Enjoyed this 'euthanasia with a twist' I liked the texting from beyond the grave. I've worked in many care homes over the years and I find suffocation almost as satisfying as 'death by enema'.

I must remember to break my

stories up a little instead of

The pacing of the story is excellent. I found myself reading faster towards the end. The same way I would read a text message.

Brilliant, Ken! Short, suspenseful (is that a word? If not it is now!), Gothic! x