If You Ever Walk Alone… 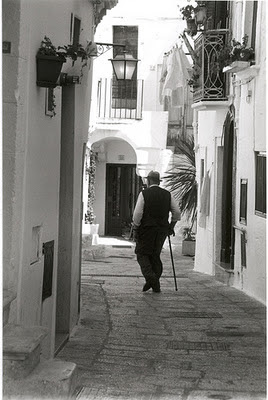 This post seems to be part of a loose theme which has recurred in my posts over the last month or so.  Please forgive me, I think today’s grumpy observations will put the matter to bed once and for all.

I’ve touched on this before.  I am a 'Serial-Say-Hello-er.  I tend to say hello to people in the street as I pass them.  Not everybody, that would be silly, but quite a few, which is still silly.

As with most things I do, this maniacal greeting of street-folk is largely driven by fear.  When I walk, I generally exist in a dream-world somewhere between waking and Narnia.  Often, people will say to me, “You’re off in a wee world of your own there.”  Because of this, I’m always afraid that I will breeze past someone I know without saying hello to them and, worse, probably talking to myself as well.

Add to this that I only snap out of my reveries when someone is coming really close to me and you;ll appreciate that only I have a very limited time to figure out whether I actually know them or not.

I’ve grown accustomed to getting a lot of ‘no-replies’… actually, strike that, no I haven’t.  I’m only saying that to try to appear reasonable and, in matters of street-greeting, I am far from reasonable.  'No replies' annoy me but I have grown to be philosophical about them.  There are foreign nationals who I greet who haven’t a clue what I am on about, there are ladies who are terrified of my unsolicited leering cheerfulness and there are a brace of sullen Connaught Men who just think I’m a feckin’ eejit.  These are understandable reactions and I tolerate them albeit somewhat reluctantly.

I reserve some annoyance for those folk who stare at you pointedly as they approach you, as if demanding a greeting then, when you give them one, they ignore you completely.  There is a special circle of hell for those miserable bastards and I will doubtless see them there ,where they will doubtless diss me yet again.

But this is all old-stuff.

Well, I say new, it’s been emerging over the last few years but it’s now got to a stage where a learned paper on the subject (such as this) needs to be published.

What we’re talking about here is what we shall now call the ‘Rudeness in Numbers’ phenomenon.   Here’s how it works:

Every morning, I meet two older men, walking in the opposite direction to me.  They are out taking their constitutional while I am heading to work.  Dressed in track suits and trainers, they cut an inspiring figure in the morning gloom, it’s almost as if they are sent there to assure me that there will be life and leisure and health and activity after retirement, after my work is done.

These people live in my neighborhood.  I know them to see on a day-to-day basis.  And we’re right there, face-to-face on the deserted street… and they can’t manage a single bloody hello between them.

Of course, I gave up eventually.  I’m only human.  After weeks and months of un-reciprocated greetings, I reverted into sullen stony-faced ignoring.  And is it my imagination or do the keep-fit-geriatrics seem even more hostile and walled now that I refuse to greet them?

This is only half the story.

Last week I met one of the pair out walking alone.  Just one.  I approached him without too much concern.  My mind had been made up long ago, these feckers don’t get my greeting whether there’s one or forty-thousand of them.  I’m walking past and I’m not uttering a single bloody_

He stood in front of me, blocking my way, and he stopped me.

And he chatted… the bugger actually had the gall to chat to me.

And as for me?  I chatted back.  It’s how I roll, I’m a forgiving person.  It’s not a trait I admire in myself, this lack of vengeful grudge-bearing but it’s in my genes or something.

So we chatted.  The weather, where’s your friend (sick), economy, road works and weather again to close.  Then we went on our way.  I felt better, I like to think he felt better too.  The day went well.

You can guess the rest.

The other morning they were reunited again, the walking half-dead.  I gave them my best cheery ‘Good morning’ as they approached me.  I focused on the chatty one.  That made no difference.  They both ignored me, completely.  They didn’t even acknowledge I existed.

If this were an isolated incident, I wouldn’t mind – actually, strike that too, of course I would mind.  But this has happened to me a few times now with different characters involved.  People on their own are friendly and nice, people in pairs are absolute bastards.

I haven’t figured out why this is yet but you can be sure a follow-up post will appear just as soon as I do.

I bet you cannot wait.

I have noticed a change when I go out these days. I look at the ground far more than I used to and, when I pass by people I resist the urge (which nowadays is only a slight urge) to look up and see if something passes between us. Not all the time—there are still those who will smile at you or mutter something unintelligible by way of greeting—but most of the time and even with the pretty ones (who would never notice a bloke like me but that still doesn’t stop them being pretty) seem less interesting than they used to. I did used to like early in the mornings—I’ve always started work at the crack of dawn with the ‘real’ working men—when you’d pass someone who clearly worked with his hands and we’d make this sound acknowledging each other’s existence, something, “harup,” an agglomeration of vowels and consonants that never even pretended to be a meaningful word although I supposed it originated as a combination of ‘hi’ and ‘aye’. The Scots on the whole, especially those of a certain age, are quite happy to greet a stranger in the street but I have to say those two old blokes have me beat. I can only assume that when they’re together their so engrossed in their togetherness that nothing is capable of breaking through. I don’t know. I really have no idea. But we writers thank the world for people like that; they are our bread and butter.

I like your blog, thanks for sharing.
Here's a suggestion: These people create a power gradient when they withhold approval and you wonder why. You approach them with a free electron and they simply collect it and bank it! Shock! You have literally given away some of your power...
But maybe it's not actually that at all. While you might feel a loss of energy or power, maybe they don't take it... They don't walk with free electrons on offer because they have each other. In science it's termed a covalent bond.
I have to go and think about this for a while. Another suggestion would be face painting. (surely they wouldn't ignore Spider-Man?) :)

Were we separated at birth? :)

I always thought it was a "Southern" thing. After all, I grew up with a Mom who knew no strangers as she spoke to everyone!

I'm a "Hello" person too and sadly, I've come to the conclusion that if you appear cheerful in today's world, you must be up to some sort of con.

And yet I keep trying.

Maybe the "sick" gentleman is mentally bullying the "talker"; perhaps thinks it's unmanly to speak to a man he doesn't know.

Heck, I'd say hello back to you!

Well, this is coming from a guy who at the mall yesterday asked a complete stranger if she thought these peacock-feather earrings matched his eyes so it's probably not worth much. Regardless, you've touched on some interesting points here! People who are in pairs always seem especially closed off to people outside the pair. This isn't true only of complete strangers. We naturally tend toward couples, I guess. The other thing is, there's a lady in our neighborhood who walks constantly. We never speak, but I always wave as I drive by on my way to or from work. For years, I never got anything but a sullen stare in return, but I carried on. Eventually, she started kind of half-waving back. These days, 6-7 years along in this non-communicative relationship, she actually waves back, and smiles.

That's a lot of comment just to say "keep trying," but maybe you'll break them down one day. Won't that be something?

Jim: There's always the possibility that I've pissed the other one off in some way but I can't think how. I really think an adage along the lines, There is Rudeness in Numbers, is being born.

Kathy: I think your comment is extremely astute and that you have unearthed a truth here. Thank you.

Hope: I was watching Calamity Jane on TV yesterday so I read your comment in my 'Calam' voice. It was nice. :)

Mike: I'm all for that - the gentle building of a tenuous relationship. You give me hope to carry on. :)

I grew up in the southern part of the US and now live in Boston. You always say hello in the south, in the north you are suspect if you say hello. "what does that feckin' eejit want?" to put it in your vernacular.

But here is an observation. Maybe the older couple you see on the street, actually is a couple and one of them is insanely jealous?

Hi Bill That's an interesting thought. I shall look at them more keenly next time and, no doubt, that will not help. :)

I tend to make a habit of looking at my watch or attempting to be otherwise occupied up until perhaps three to five paces. I then look up and give a smile, which may or may not appear awkward. I've grown to abhor greetings such as, "How's it going," "How are you," and the such. No one wants the real answer and if you reply with, "Good, you?" There generally isn't a response. You've already passed the greeting threshold, no further comment required.

It actually bothers me to some degree, but I suppose I've developed my own defense mechanism to deal with it. :/