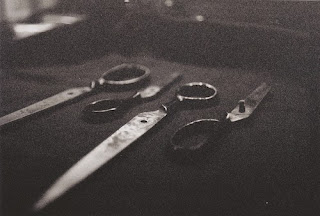 This week, I’ve been thinking back to how it used to be when we went to the movies back in the Seventies.  In particular, I’ve been remembering how films used to get ‘cut’ by the censor and how odd it was to watch a film then and watch all those cuts play out brutally on the screen.
Of course movies are still cut for cinema and edited-for-TV and censored these days but it’s not like it used to be.
Nowadays, we are allowed to see so much more, so there’s so much less cutting required, and also the technology for cutting is much more sophisticated.  These days, it is very hard to notice what cuts there are.

Not so, back in my day.  I don’t know exactly how movie cuts were made but it seemed like it was done with a huge blunt scissors on the actual film roll.  Often, while watching the film, some terrible event would be signalled and built-up-to and then, suddenly, the whole movie would have a big lump taken out of it and we, the audience, would be shoved on to the next scene, wondering what the hell had just happened.

This was by no means an Irish-Only phenomenon.  Although we have quite a little reputation for being heavy handed with banning movies, (both ‘Life of Brian’ and ‘From Dusk Til Dawn’ spring to mind) Great Britain was a real star for cutting stuff as well, back in the day.  I remember reading a British review of ‘Flesh for Frankenstein’ where the reviewer said he spent a considerable amount of time staring at a blank screen where dubious scenes from the film had been ripped away.  Interestingly, he also remarked that his imagination was probably much worse than those images which had been removed.

This is certainly true of me.  I could dream up all kinds of awful stuff in place of the stuff which the Film Censor had decided I shouldn’t see.  He would have been doing me a favour just showing me the actual scene, it might have spared me a few nightmares.

For me, the most memorable ‘cut films’ of that era were the Bruce Lee ones.  As young teens, we loved Bruce Lee with a passion that knew no bounds.  The movies were way too old for us to get in to see so we sneaked in to see them.  In ‘Enter The Dragon’ Bruce fights the Evil O’Hara who was responsible for the death of his sister.  Disappointingly-enough, Bruce is seen to dispatch O’Hara with a simple enough side-kick which sends him crashing into the spectators.  He is pronounced dead straight afterward.  That is the film we saw in the Cinema.

But it was ‘cut-to-bits’, as we used to say.  In the uncut version, O’Hara recovers from the sidekick and attacks again, brandishing two broken bottles.  Bruce sorts him out and lands, feet first, on his head with a skull-crunching coup-de-grace.  We get to enjoy Bruce’s slow-mo expression as he Riverdances the life out of this, his more-hated of opponents.

Which brings me to the final point of this ramble – the sincere joy of finally seeing a missing scene, years after it was first cut.  Such was the case with the above scene, where, one night on TV, the missing action magically reappeared, forgiven, and all was revealed.  It was a genuinely exciting moment for me, which is a bit sad, I know.

All of this pondering on censorship cuts was brought on by watching ‘From Russia With Love’ on ITV yesterday afternoon.  After all the hype and fashion has died down, this film has now settled itself into being my favourite of all the Bond movies.  There is no ‘save the world’ mission here, rather just a rather lewd and tawdry attempt to steal a decoding machine.  At times, it’s all so very lowlife that the bad guys almost start to come across as being the good guys.

The point is, ‘From Russia With Love’ was quite brutally cut upon its release and some of the keys cuts have never been restored.  So, these days, not only is it a grand entertaining period spy movie, it’s also a perfect example of heavy-handed censoring which has never been put right.

There are cuts throughout.  Watch the final showdown between Klebb and Bond – what happens to Tanya?  We don’t get to see.  I imagine Klebb went at her with a four-blade-chainsaw, but that’s just me getting carried away again.

Watch the final scene, with Bond and Tanya on the boat.  Witness one of the most crude and jarring cuts in motion picture history, when Bond examines the film reel, and wonder what he could possible have said to warrant such a cruel edit.

In fact, he simply said the words, ‘What a Performance’.

Although it seems we’ll never now get to hear him do it.
Posted by Ken Armstrong at 14:36:00

By the time I was old enough to watch movies, there wasn't much they would leave out.

But I do remember being a tot and seeing Sixteen Candles. At the video store it had been labeled "G". I watched it with the babysitter and told my parents when they came home that they shouldn't have let me watch it.

I have mixed feelings about censorship. In principle I’m opposed to it but when I see what some people want to put on the screen I’m not too sure we haven’t gone too far in allowing freedom of expression. I read a review in SFX of a film called The Human Centipede in which a ‘mad’ scientist constructs a ‘centipede’ out of three human beings by sewing them all together via their digestive tracts. There was a small photo to illustrate. Why? Why would anyone want to make a film in which this happens and why would anyone want to watch it? Just because we can doesn’t mean we should. I’ve not watched a horror film in years and even then I didn’t watch many. I do read reviews when I see them and that’s usually enough for me. When the world read about what the Nazis were doing, experimenting on people, they were rightly aghast. Now people pay good money to watch it. I don’t get it.

It is quite a shame to have something built up to and then not get to see it happen. Or worse, wonder if you misunderstood what the buildup was for.

Of course, you are right: it seems like nothing is cut nowadays. Do they even have film censors anymore? Of course, they do for television, but are movies censored and cut in most countries nowadays? It sure seems like they are not. Still, the ratings system could be construed as an attempt at censorship.

And, since you can see just about anything on the internet (as long as you are willing to pay, especially for the "exotic" stuff) what would be the point in attempting to keep anyone from seeing anything in a film?

And as Jim said, why would anybody want to watch someone else getting mutilated?