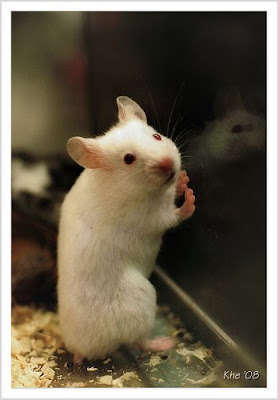 Something is living in my attic now.


It’s become a bit of a ‘thing’ with me, mostly because I’ve never had anything living in the attic before. This thing – or things – in the attic is fairly small (most of the time) and a bit scratchy and pitter-pattery. It’s active mostly in the night and it moves fairly rapidly across the other side of the ceiling…

… now you’re all looking at me like I’m stupid.

I have been tracking this beast for a few weeks now. I can find no droppings, no chewings, no earthly trace.

I have also been trapping for quite a while. At first my ‘Last Tango In Paris Buttered-Up’ mousetraps were sprung without snaring anything. For the last week, they haven’t been touched at all.

One of the few upsides to all this is how I have come to enjoy being in my attic. The careful priming of the traps, the feeling of dangerous solitude, the frisson that, at any given moment, a very small creature might venture outside of its nature and go for my throat.

I’ve got lots of tips on the best bait for my traps, which now comprise a bewildering array of alternating humane and brutal contraptions. I’ve got peanut butter, butter, bacon, cheese, more cheese, smelly cheese and After Eight mints. The mice must think it’s party time at the Ambassador’s Residence.

Yet here I am - still no closer to meeting my invader.

The trouble is, this kind of thing messes with my slightly over-active imagination. I have one of those pull down stair thingies to get me into my attic. As I pull it down, I envisage thousands of hostile dying mice cascading down into my hair…

…then sometimes I think it’s a rat up there. I once came face-to-face with a wild rat as a child – we were perhaps six inches apart, this rat and I – and I’ve had no genuine love for the breed ever since. If I meet a rat up there, I’m going to just step between the joists and go back down to the kitchen the fast way.

I actually do believe that it’s a mouse, or mice, up there but I really want to know for sure so that I can finally ease my squirming imagination.

This morning, at six thirty, I lay in my bed, arms behind my head, watching a spot on the ceiling above my head where, behind the plasterboard-and-skim an incessant scratching… scratching… scratching was going on. Was something about to dig through and finally show itself? I didn’t really need the alarm this morning.

So, dear folks. Any advice for me on this one? Different bait? Poison (I hate the thought). Ignore the little mites? Get the professionals in?

Or maybe there’s really nothing up there at all… maybe this is my own personal Tell Tale Heart, reminding me of some long dead transgression. Beating… beating… beating…

There he goes again, above my head...

…shut up, you little git.

OK, sure it's not a bird/bat in the soffit boxes?

Marmite - love it or hate it, I know someone who got rid of mice with it. The mice were so appalled at the Marmite that they moved house.............

I beg of you, don't put poison out. For their sake and yours - a dead mouse that you can't locate stinks WAY out of proportion to it's size.

Pam: I'm not sure about the bird - sometimes I suspect that. My attic is not easily accessible.

Susan: That is just *so* funny. I gave the mice one after eight and ate the rest myself. :)

Bonniecelt: I *promise* I won't put poison down. Your reasoning is very sound. See you on the trampoline. :)

When we had a mouse problem some years ago, we tried the humane trap and it simply didn't work (mouse was too fast, or too smart) so we resorted to the inhumane one, and it proved very effective. I do, however, have two very sad journal entries from that time recording how I felt about laying the trap and despatching our first mouse. In our case, it was necessary because the little buggers were crapping visibly in our food, but if you're not actually sure that Mr Mouse exists, I'm reluctant to recommend anything except that professional pest control should do an investigation.

Funny post, you make me laugh...
Is it raining with you? We had intermittent scratchy thing happening & realised it was only when it was raining. Instinct is to head for high ground so they run up drain pipes and squeeze into roofspace. We put chicken wire over end of drainpipes and they've not been back.
Might be worth a try?

We put poison down for chipmunks and squirrels all Spring and Summer. They try to dig their way into the house from outside, especially this time of year. We had to fix part of the siding to keep skunks from making a nest just under the front room, again. Hope that keeps them out cause the poison didn't seem to work on them. Sure is not a nice thing to come home after dark and smell a skunk, knowing they are living near the front door of your house.

Someone else suggested we get traps. When we catch a rodent just throw the whole thing, trap and rodent, into the fish pond and let them drown. I know there are some who will be horrified with that but it seems fairly reasonable to me. We don't live in the country any more. They really do need to find their way out of the suburbs. One way or another. I sure don't want rabies!

We had that same thing a year ago in NH..it was a squirrel.

Whatever it is I bet it's not cute and white.

Some say the best cure for scuttling in the attic is snake poo.

Good luck getting that in Ireland!

:)
We have a resident upstairs as well - we used to think it was a rat but recently I saw a possom on the road in our suburb so maybe I have a little marsupial friend.

No. You're right. More likely a rat.

E-J Not waffling at all. Very welcome thoughts. I think your advice is good, pretty soon now, I will stop enjoying myself and call in someone who knows what they are doing.

Visiting the inhumane traps is a mixed experience - I don't really want to find anybody in there, I guess...

LuceKD: See, that's *interesting* cos the noise is extraordinarily interrmittent... does it occur when it rains, not sure but I will check. Ta.

As for making you laugh, nuh-huh, I feel for this shit before. :)

Laura: You are the Rambo of my visitors here. I would not be the rodent to come visit your pad. :)

Not the... Did you get a pis of this squirrel? It sounds terrifying - like Sandy off Spongebob when she hibernated.

Cellobella: It won't be cute or white, no. But never fear, you just filled the blog-quota for that. :)

If it's a mouse, there will be "signs"...they seem to love to poo in someone else's space. :) Mouse control is hubby's job but we found the food of choice here was half a jellybean. Our mice seemed to "prefer" licorice ones. Go figure.

Squirrel was my second guess because they scamper so much.

I'd ask if you had bats in your belfry but that just seems rude somehow. :)

I had a similar experience last year, a little/bigger/big guest in the attic. I caught a glimpse of it one day, momentarily, from the rear. Pregnant. That did it. Doreen was sure it was a rat. All I could confirm was a a rotund body and a long tail. Never did find out.