Some Thoughts Upon Hearing of the Death of Paul Newman 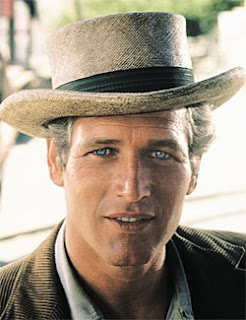 Paul Newman passed away today, may he rest in peace. He was a great film actor, a superstar and a cultural icon. He also carried with him an air of integrity which set him apart from many of his peers.

The passing of Paul Newman makes me feel my mortality a little more than other deaths have done. At Eighty Three, he was not a young man – he has lived a full full life.

But I feel I knew him as a young man, I really do. My earlier years were punctuated by those youthful features and those blue blue eyes. Other famous people have died and their deaths have made me sad but they were always old, weren’t they?

… and I feel my mortality more keenly than I normally do.

Paul Newman was like a child in ‘The Hustler’ in 1961 – and I was just getting ready to be born. If I was there when he was so young, how much time is there left for me?

It’s not morbid to contemplate this, I think it’s good. If there’s laughing and loving and living to be done then now is the time to be doing it – it’s best that we keep that in mind.

So thanks, Paul and God Bless. You’ve thought me some things along the way and now, in dying, you teach me to live a little more.

Someone once asked Paul Newman what he envisioned on his tombstone. With a grin he replied, "His eyes turned brown and then he died."

He's one of the last of the true gentlemen who just happened to be an actor. I think that generation of Hollywood was special because they maintained their privacy, which made them somehow magical. Today's media works too hard to erase taking people at face value. He seemed like a truly nice guy and I think those of us who sat in the dark and watched him work, recognized him as a good guy...no matter what color hat he wore.

You're right. He'll be missed.

I was just watching him in Message
In A Bottle on TV last week and thought even as an old man his character was more appealing than the lead (played by Kevin Costner)
Then I had a dream about him,and was thinking about him all week, but didnt know that he had cancer-miss him already. The movie world
has lost two great actors in the same year-Heath Ledger and Paul Newman.

I guess everyone felt the same about him in one way or another.

To me he seemed like a guy who's word or a handshake was all one needed.

A great tribute post Ken; I wish I had something quippy to say to commemorate such a great man but I'm just not that quippy. It's a sad day indeed for I found out today that a close friend's dad has been diagnosed with lung cancer :(

my favorite actor of all time and a very humble man who did great things with the money he made.

I could watch Cool Hand Luke and Nobody's Fool over and over again and never be board.

Hello Mary: I haven't seen 'Message in a bottle', it sounds a little like 'The Notebook' except with a bottle in it :) (kidding). But PM certainly maintained his artistic integrity in his later work. Talen, below, mentions 'Nobody's Fool' which is a fine film adapted from a fine book.

Hi Alan, you've got him nicely there - his professional persona certainly reflected this and the things he achieved in his more private life (Barrettstown, here in Ireland) certainly echo that.

Hi Reggy, I *am* sorry to hear that. 'Quippy' isn't always good, just continue to be yourself - that *is* good.

Hi Talen, thanks for dropping by - I'm pleased you name check 'Nobody's Fool' and 'Luke' we will watch repeatedly forever - 'Shakin' the tree, boss, shaking the tree' is a refrain I use regularly in my working-life.

The first actor's death to hit me was John Wayne's. I remember going out and buying a tribute magazine and wallowing in his passing a bit. Now too many have gone and Newman's just another. What gets me are those younger than me who die and there are more and more, the bright stars snuffed out before they got to burn bright. At least Newman will be long remembered for a respectable body of work.

One of my fave actors is Paul Newman. The Sundance Kid...was a hit with me and of course Robert Redford.

His stint as an actor was never with intrigues. He was the clean, good looking one.

May he rest in peace.

No Message In A Bottle was nothing like Notebook, lol. I keep remembering that great scene in Butch Cassidy and the Sundance Kid-Raindrops Keep Fallin On My Head, the bike ride with Katherine Ross-Im kinda affected by Paul Newman's death-even tho he was a good age-it's sad.

HI Jim: I remember reading somewhere about John Wayne telling his son about his illness.

His son replied, "Don't worry Dad, they got great drugs now, the Clap ain't such a big deal these days."

I was just watching him in a bit of 'The Quiet Man' on Friday evening - what an amazingly sexual film that was!.

Jena: My Granny used to take me to the Matinee every Saturday and we saw Butch and Sundance together - fond memories, I think I would have been seven or eight. She told me that they escaped in the end - I hope Paul has escaped in the end too.

Hi Again Mary: I know what you mean, Paul Newman's death seems more of a 'thing' than most others.

He was just so gorgeous - in every sense.
x

Hi Rachel: He was cool.. and good. I'd settle for that I think

It's funny but I only recall a few of the films he made by name. I know I must have seen all or most of them. I think Butch Cassidy and Coolhand Luke were probably my favs.

He had a quality about him that was really terribly appealing.It makes me a little sad too.

He was a man of grace and kindness. There are few actors like him!

Paul Newman is one my husband's favorite actor. He was a humble and pleasant man.