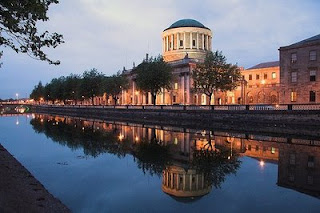 When I went to college in Dublin, there was always stories around about a legendary Circuit Court Judge and the eccentric actions he would take from the bench.  Although I know his name, I won’t use it because there is a fair chance that the stories are apocryphal or at least altered a little to improve the telling.

The best known event was when the judge told a young ‘scally’ that he was going to send him to jail… unless he was gone from his sight by the time the judge signed the document in front of him.

The young man stood staring at him, not understanding what was on offer.

And the lad ran, as fast as his long thin legs could carry him.

I like that, but this my favorite, I’m always telling it.

A rough-piece-of-work was in the witness stand, accused of assaulting an associate of his.

The barrister for his defence was trying to lead him carefully through his testimony:


Barrister: Tell us, in your own words, what happened.

Accused: Well, he came at me and I hit him a dunt in the bollix.

The Barrister notices a glare from the judge.

Barrister: Perhaps you could just rephrase that for the court?

Barrister: Again, although I said, ‘in your own words’, perhaps…

The accused struggles for memories of biology lessons from his dim and distant past. He comes up trumps.

Accused: Right! (Clears throat) He came at me and I hit him a dunt in the… Testicles!!

At which point the judge loses patience and leans over to the accused, speaking clearly so the whole court can hear.

Judge: I think we all know where yer bollix are, Murphy, but would ye kindly tell us what a ‘Dunt’ is.

LOL, although I think it loses just a touch in the translation across the pond.

I LOVE that story. I teach Protective Behaviours and encourage people to use the correct terminology for private parts. Can I tell that story at my next training please? It is simply beautiful.

Hi Matt: Yes I knew the linguistics would be something of an issue here but I said I'd chance it anyway.

I realise that 'bollix' tends to be used to say 'mess up' as in 'bollix it up' and that it's almost innocuous. We use it in the same way too but it seems ruder when we say it. Obviously it also refers to that legendary groin region and the correct (rude... sorry) term is 'Bollocks' but in Dublin it tends to come out Bollix so I used that.

Hi Megan: By all means!! Go for it. I've been telling it (with a broad Dublin accent) for over twenty years and it always seems to go down a treat. Verbally, it can sometimes be more fun for the judge to say 'enlighten us as to the meaning' rather than simply 'tell us the meaning' but that's not as good written down.

Perhaps let me know how it goes for you? :)

Very nice story. I didn't catch any of your re-tellings in all the time I've known you (being the eighty-year-old I am, I saw you taking your first steps), so it was good to see it written down.

Now when I was growing up it was 'goolies'.

OMG, how funny! Thanks for the laugh......I really needed it today.

Is this the portion where I am suppose to laugh? LOL...kidding Ken, This must be good being "spoken".

Gratifying to hear that the Irish use good Scottish words like "dunt"!

Ah, I can always trust you to add to my vocabulary. :)

True, although Bollocks was used in Mamma Mia by Colin Firth twice. It seemed out of place in the movie. Oh, and I'm pretty sure the term is never used in Dublin....Ohio....that is. (Wealthy NW suburb of Columbus, if you were interested in a geography lesson. Okay, I'm rambling...must be the cold medicine. Later.)

thanks for sharing! interesting story you have here.

Yes, Jim, when I was growing up it wasn't goolies, but that's a whole other story :)

Caledonian Jim: I love 'Dunt', for me it means 'headbutt'. How that work's in the goolies is a bit of a mystery - maybe the accused was a midget? :)

Fiendish: I'm relieved you were no more graphic that 'saw you take your first steps'. Eighty is quite young these days... 'years left yet, I'm sure.

Matt: You're getting all political over there - I'll have to keep my head down for a while, it's all too partisan for a fence-sitter like me, but you go dude, it's good stuff!!

What? Me Political? I haven't given any money or time to McCain/Palin. Democrats are labeling me as a traitor, Republicans are embracing my views. I'm just being fair. When I see a spade I say: "Hey, Spade!" And the spade says: "Yeah, what?"
And I point to the spade and say:
"You're a spade!"
Unfortunately, in this country, (USA), the spades rarely reply: "Duhhhhh."

Congratulations on winning the trivia contest on You Should Own....You've got way too much time on your hands, Mate!

Well, 'Political' was intended as a criticism or anything :)

So I don't get into American Politics. Why should I? I'm Irish after all. :)

Dang Dude! That last comment was supposed to read:

"Well, 'Political' wasn't intended as a criticism or anything"

Liked the story greatly. What is a dunt?

Ha! I knew what bollix was, but hadn't a clue as to what a dunt was until you let it out in the comments here.

I've seen in the movies where a guy charges another guy like a bull and the head would end up in the stomach or the bollix, so don't guess he would have be be a midget necessarily.

I think you got 14 diggs the last I checked.

On reflection (on 'dunt') I believe the word is largely onomatapaic. The word reflects the solid thud that occurs when one head meets another with force. :)

I think our hero was further bastardising the usage by applying it to his foot or hand. I'll forgive him, he left me with a fun story.