Living with the Truth By Jim Murdoch – A Review 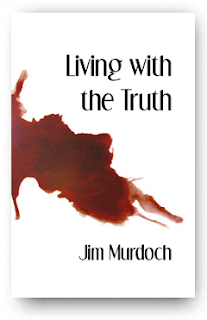 ‘Living With the Truth’ is Jim Murdoch’s first published novel. There are several more to follow shortly.

I think it is a ‘Good, old-fashioned, read’.

That is quite different to an ‘Old-fashioned good read’, which it also just happens to be.

You’re with me so far, right?

The story is effectively a two-hander. Firstly we meet Jonathan Payne. He’s a second-hand bookshop owner who leads an understated, solitary existence. One ordinary day, he is visited by ‘Truth’, no less.

Truth quickly becomes his companion, his sidekick and his erstwhile mentor. The narrative follows Jonathan’s exploits with his new associate as he gradually discovers what a frustrating, embarrassing yet ultimately revealing companion the truth can be.

Truth accompanies Jonathan to his work, to the seaside… everywhere. And, everywhere they go, Truth challenges the people he meets while sharing with Jonathan some choice portions of his omnipotent knowledge of everything which has ever come to pass in the whole history of time... but nothing about what may yet come to pass.

Ask yourself, how unnerving would that be?

Contrary to some other reviewers, I did not find the book to be an easy read. There is much packed into each of these little pages and I had to proceed with some caution lest Jonathan and his friend Truth might dash ahead and leave me behind.

The action is somewhat episodic and those seeking a riveting story line might come away from this novel a little bemused. Jim. you see, is far more interested in his characters than in putting them through some ridiculous assault-course of a ‘De Vinci-Code’ plot.

In fairness, this book is about as far from ’The De Vinci Code’ as one can get. It is a serious study of life, truth, religion, sex, loneliness, ambition, and God knows how many other things as well.

As I mentioned, it did strike me as an ‘Old Fashioned Book’. Those long paragraphs portraying Jonathan’s somewhat dour existence, gave me a sort of a ‘Sixties’ feeling about the proceedings. I was thinking ‘Keith Waterhouse’ and ‘Kitchen Sink Drama’ long before Jim name-checked ‘Billy Liar’ somewhere along the line.

But then, Jim names-checked everybody somewhere along the line.

Jim is a serious writer but he also is gifted with a super sense of humour and he comes to his writing armed with the most tightly-packed bag of cultural references I have ever seen.

His ‘Truth’ character is an ‘Enfant Terrible’ of quips, verbal side-swipes and non-sequiturs. His book may be a little light on story but it is big on character and even bigger in heart.

Now then… having just said that the book is a two hander, I now wish to contradict myself.

The book is actually a three-hander.

Let me try to explain...

When Lady Diana gave her famous doe-eyed interview to BBC reporter Martin Bashir on the 20th November 1995, she indicated that ‘… there were three of us in this marriage’. In a somewhat similar fashion, there are also three people in this novel.

That ‘third man’ is everywhere, he’s lurking behind the bookshelves, at the next table in the restaurant, across the aisle on the train.


That ‘Third Man’ is the writer, Jim. 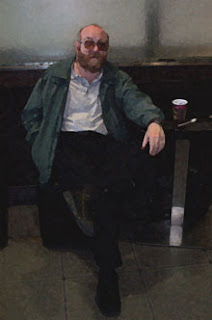 Nowadays it seems that every single novel in the world requires the writer to be like a puppeteer, manipulating the characters quietly from behind or beneath, never showing himself or taking an active part.

Jim shows himself all over the place in his writing. He cannot resist providing knowing commentary on the proceedings as they proceed. If there’s a good cultural reference to be utilised and the characters of the book can’t handle it, never fear, Jim will get it in there himself.

And this is by no means a criticism, in fact, I bloody love it. By deliberately putting himself forward as a succinct personality within his own book, Jim puts himself in the company of some of the writers I treasure the most – those who have fearlessly done the same. Writers like; Flann O’Brien, Tom Robbins and Spike Milligan. These men are present within their own books like puppeteers who have stood up from behind the striped curtain to play out in public with their own little Punch and Judy dolls. It isn’t easy to carry off – you need a distinctive voice for a start – but Jim does it admirably well. In fact, I would go so far as to say, “That's the way to do it!”

One final thought. I know Jim through his world-class blog and through his welcome visits to my own corner of ‘t’internet’. If I knew nothing of him except what is in the book, I wouldn’t dare make this suggestion. But a little learning is a dangerous thing and I’m feeling bold.

I think one of the reasons that Jim succeeds so well with this first novel is that he is actually both of the central characters.

But, when he writes, Jim becomes ‘Truth’.

On his Blog, ‘The Truth About Lies’, he exhibits many of the same traits as Truth. He is confident, knowledgeable on his subject matter and if he doesn’t know something, he will spend all the time necessary in finding it out. He is investigative, challenging and fairly bloody uncompromising.

Jim is Jonathan and Jim is also Truth and that, I think, is why this book works so very well.

I commend it onto you.

Here are some other reviews of Jim's Book.

More About the Song


You can, if you wish, purchase the book directly by clicking here.
Posted by Ken Armstrong at 21:02:00

Nice review, Ken. And you've pulled out something that I was aware of when reading it but didn't notice enough to be able to articulate - namely, that Jim's voice sounds loud and clear through the novel, and beneficially so. Spot on.

Sounds fascinating, and like something I would read. I'll look for it.

A really great review, Ken - you make me want to read it again for the aspects I missed. Well done.

I should have got to you yesterday, mu apologies that I did not, this Kick Ass Blogging Long-listing/short-listing is taking longer than I anticipated. However, the point of all this is to ask if you would be prepared to accept the reward. Hope you will.

Good job, Ken! And brave (because Jim always says he doesn't like talking about himself...but he's getting over that... I think...). And a lot more succinct than my contribution!
x

Great review. Considered. Erudite. Jim, I might even read your book!

You put this humble reader/reviewer to shame.
:)

Rachel, I hate talking about myself but I don't mind if other people do it as long as they say nice things.

Matthew, Dave and Cellobella, yes, Ken almost makes me want to read the thing but you don't want to know how many times I've read it.

And, Catherine, that probably is why I've been struggling so much with what I'm working on right now. I can write in another's voice in short spurts but keeping it going in an extended text is proving a problem. Ken never cried though. At least he never admitted to it.

Hi Ken, that was a " revealing" book review...just like "eureka'! lol...Now I really, really would like to buy Jim's book.

Thanks for sharing and cheers.

That, Ken, was a very well penned (keyboarded?) review. I have no doubt that Jim did a bang-up job and after reading your review I may have to put forth the extra effort into adding it to my reading list. Thanks for the link where we can get our hands on a copy. I suspect I will be fishing this post up out of the archives in the coming months.

Great review, Ken. I have perused Jim's blog and have been waiting to get my hands on a copy. After reading the review, I will definitely possess a copy. Great work and keep them coming!

Thanks guys. How kind you all are.

It's a fine book and I didn't mention how beautifully packaged it is - God I sound like an advert or something, but I'm not. My first delight after getting the book was how attractive a design it is.

I am not in a position to say that the book is excellent, although by all accounts it sounds like it is. Instead I say: excellent review, my good man. I really do want to read that book.

I like knowing that the author is "in the book"----it makes it feel much more personal.

I am the author of http://TheGreatStone.com ; it is a blog that provides reading for people to motivate them and lift up their souls.

Before anything else, I wanted to thank you for your blog. It is definately great reading and I am glad to have come across your blog.

I also wanted to ask if you would be interested in exchanging links.

Our blogs would definately compliment each other.

I hope to hear from you soon.