Over dinner, George Michael was on the radio singing 'Somebody to Love' with Queen.

I said to my two young men, "This was originally sung by somebody else, do you know who it was?" 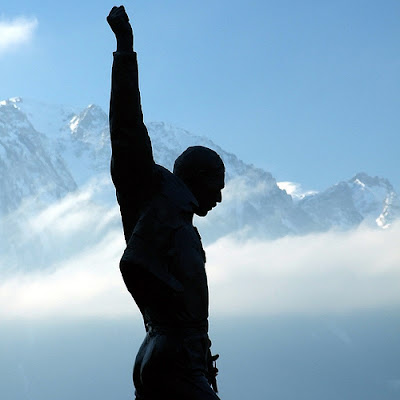 "I'll give you a clue. His first name was Freddie and his second name is also the name of a planet."

LOL Exactly how does a dad explain to the 12 year old about Uranus? Don't scar the kid for life!

Hope you enjoy moderating this! Uranus
Hm. Did you ever hear de Dannan's
version of the Bohemian Rhapsody
thing? Quite good. 'Switched on Bach',
produced around 1975*, was also a good
'cover' job: Bach done entirely on a
Moog. Highly recommended. Will now
get off this site (4.05am, 29th). Find
writing panes on blogs using a mobile
very awkward. Billtweet.
*May even have been 1968.

I take it that that is a different song than the Jefferson Airplane's "Somebody to Love" (here).

He most probably would have written a song about it.

Next thing Uranus won't be a planet either. Poor Pluto.

We are the Champions. :)

And so the sense of humour is passed on from generation to generation...
x

Beth: There's tougher explainin' than that to do. :(

K: It is a different one, yes. That was *so* interesting - I had said to myself, 'I don't know any other songs by that name' and then, of course, I did. A good song too. Thanks. :)

Laura: Poor Pluto. Did they mot reinstate it as a planet? 'Thought I heard something...

Rachel: We live in hope. A sense of humour may well be a pre-requisite to survival in decades to come...

I thought it was Mars, seriously....lol...Happy blog hopping.

I now have hope for future generations...I feared all sense of humor [even unintended] might be left by the wayside.

Thanks for making me giggle on an otherwise giggle free day.

Oh, BLESS.
That's a good one, and at dinner? Did you spit your Coke all over him? LOL

How could anyone despair for the future with kids like yours around? They're such great boys.

And that so came out wrong, but I'm leaving it.

FYI, Anne Hathaway sang "Somebody to Love" in Ella Enchanted. What an amazing voice she has.

I'm sure he would have liked it, but the interesting question is whether or not your 12year old knew what he was saying.

Hey!! I did a whole comment thing here the other day and now it's gone. Matt, Dave, Fiendish, Susan, Penny, Hope and Jena - I said such nice things too. Who moderates this place??

When my daughter was a little girl, probably about five, we were watching TV and The Beatles came on and I asked her, "Do you know who they are?" to which she replied, "Of course, Daddy - it's The Monkees."

Butt of the joke.