Getting to the Bottom of the Squeak 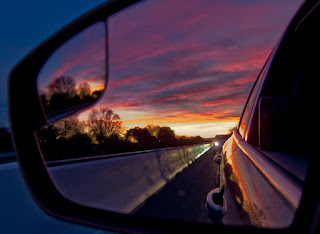 I had hardly noticed.

I do that sometimes. I noodle along, not quite seeing or hearing what is right there under my nose. But there was a car journey looming and Trish drew my attention to it.

I got the first that. The first that was the car. She can’t go in the car. Okay. But what was the second ‘that’? The one in the inverted commas. What on earth was ‘that’? I asked her, it seemed the best way.

“The awful squeak in the car.”

I had heard it, I guess, but it was just another of the grunts and squeaks that go to make up my everyday thought processes. I took the car for a drive. Now that I had been made aware of it, the squeak was dreadful, all-consuming, horrific. There was no way we could embark on a long drive with that hellish intermittent noise as an accompaniment. I had to get to the bottom of it.

It’s hard to go looking for a squeak that only happens when you’re driving but I gave it my best shot. The squeak was clearly coming from the passenger-side door. It had a ‘rubber on rubber’ quality that meant it was probably the gasket on the side window, or the wing mirror, or the rubber seal around the bonnet, which did look suspiciously askew. I set to work. I pulled and tweaked and oiled and WD40’ed every blessed thing in sight and, after every series of interventions, I drove the car again and still it squeaked. And it was right there. I could practically see this darned squeak. I could practically smell it.

(Did I mention that there will be a moral to this little story? No? Sorry about that. I did intend to forewarn you because I hate it when a moral turns up, unbidden, right at the end. So, moral coming, right at the end, you have been warned.)

The long and the short of it is that I couldn’t stop the squeak. Worse still, I couldn’t even identify where it was coming from exactly. I mean, as I’ve already said, and I apologise for repeating myself, but it was right there.

Suddenly, it was Thursday and the drive was on Sunday. Five hours of Trish and me in the car with the squeak. Untenable. I gave in and rang Dave. Dave fixes my car and keeps it right and roadworthy. He competes in Iron Man competitions all over the place and is the sweetest guy I ever met who could kill me instantly with one slap. It wasn’t that I minded phoning up Dave. It was just that this was a puny, obviously-superficial squeak and my spray can of WD40 and I should have been man enough to sort it out all by ourselves, without having to seek professional help.

Dave was busy so I got Mike on the phone. Mike explained how they were fully booked out for the remainder of that week but would look at it next week. I would normally - always - accept that but I was in some trouble here. I explained the circumstances of the upcoming long drive. I also explained that it was the most obvious, superficial, of squeaks and that real men like Mike and Dave would find and solve it in mere seconds, whereas an imposter fool like myself seemed incapable of doing so. I finally explained that, if Dave couldn’t help me with this, he could perhaps help me with trying to find a new wife as the current one would possibly give up completely after the upcoming vehicular incarceration with both the squeak and me.

Mike said he would have a look.

Mike and Dave found the squeak and they fixed it. Thank you, Mike and Dave, Dave and Mike (I don’t want to risk annoying anyone with my naming-order).

But here’s the thing.

It wasn’t easy. It wasn’t superficial. It wasn’t something that yours truly could ever have hoped to fix.

It was something called a Bushing, deep in the heart of the machinery around the wheel. I thought Bushing was something you did as a teenager with a bottle of scrumpy but it is also this, apparently. For all the good I was doing, I might as well have been piddling on my wing mirror as spraying it with copious dollops of WD40.

We completed our drive in squeak-free bliss and it was glorious and fine and terribly-terribly sad, all at the same time. For such is the nature of these drives, of which there seem to more and more every year.

And so to the moral of the piece. The one I warned you about earlier. Now that I’ve come to it, I’m not entirely sure what it is. I just know it’s there and it’s worth considering. Let me give it a go.

I think the squeak can be seen as a kind of a metaphor for ourselves and our general wellness. It’s certainly something I’m guilty of. Knowing, in my heart, that the glitch I feel, in my heart or in my head, is a silly superficial thing. Spray something on it and move on. But sometimes, just sometimes, you have to acknowledge that the source of the squeak lies just a little further in, a little deeper down.

Unlike the car squeak, though, it doesn’t always need someone to come and put you up on a hydraulic lift and take you apart, in order to repair you.

Sometimes you just need to know that the hurt lies little deeper than your wing mirror and adjust accordingly.

Sometimes, just knowing that can be adjustment enough.

Oh, this takes me back. My dad once had a squeak in his car that drove him to total distraction. His obsession even got so bad he had my brother and I—separately, I should add—climb in the boot of his car (a Ford although I’m not sure if it was the Consul or the Capri) and listen for the damn sound which we did gladly—what kid doesn’t want to get driven around in the boot of a car?—but no joy. I’m not sure he ever did solve the problem or maybe that’s when he sold whichever one it was. As with you he suspected it was the bushing and I’ve no doubt he exhausted more than one can of WD40 on it. I mean he probably had the wheel off and everything.

As for the squeak as a metaphor? Squeaks are symptoms, natural responses if you will, and it’s easy to mask the symptom and not treat the underlying problem. Which I’m sure we’re all guilty of because life is busy and we postpone what we can as long as we can. Things rarely get better on their own. Occasionally, however, as in the case of a house settling the odd creak or groan shouldn’t be seen as a cause to worry. That said bushings can be replaced, painful memories though, what can you possibly do with them?