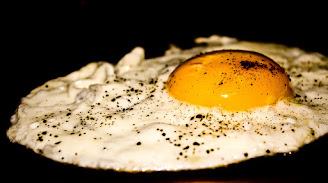 I like a Saturday sausage at the best of times. There’s no denying it.

But lockdown and all the related stuff has brought that once humble banger to a whole new level. The massive Saturday lunchtime fry up is now a thing and long may it last. All hail the conquering hero.

Truth? It’s not all that massive. Not in actual scale, at least. It’s more massive in its social context, the importance of its role as a marker for where we are in any given week.

If it were just me and Patricia here, it would still be the humble sausage on its own. All instigated by me. Patricia is good and would not look to overdo it on the sausage front, but I would eat the little beggars all the livelong day. But it’s not just me and Trish, not since March when it all kicked off. The two boys-to-men are returned from university and we are a full family unit again. Some more truth? It’s been totally great. We love having our guys here at the best of times and being able to revisit the idea of our happy foursome settled under one roof continues to be a joy. Of course, in an ideal version of this world, it wouldn’t be happening. Not for so long at least. But it is and it’s no hardship.

I went through a phase of grilling my sausages. It’s okay. But look, you can’t beat a fried one. You just can’t. I like to fry them quite gentle over a low flame. I do them on their own. Let’s not crowd the pan. Get all those suckers brown all over, not too crispy, before you do anything else. I heat a big plate under the grill and the sausages go in there under some tinfoil. I learned that from seeing Mum do it for Saturday evening fry ups years ago. Everybody probably does it, but I like to pretend it’s only me. The hot plate will keep those sausage nice and warm while the bacon gets a solo run in the pan. Maple bacon cut nice and thick. Actually, I tell a lie about the solitary pan. The black pudding is sometimes allowed in with the bacon, sometimes with the sausages. It doesn’t take up too much space and it fries up pretty quickly and it imbibes everything else with a nice black-pudding vibe.

Bacon is done. Not too crispy but well cooked all the same. On to the hot plate with the sausages. There’s a sheet or two of kitchen roll in under all the sausage and bacon to take a little of the excess oil away.

Time to get some eggs on. Nice fresh ones. Crack them on the side of the pan, turn the cracked side up to the ceiling, open the shell up and let them glide on to the pan. They’ll be coloured a bit with the essence of the things that have been on there before. So they may not be as aesthetically pleasing as an egg fried in pristine oil but, again, the borrowed flavours are worth the trade off of the slightly unsightly end result. Nice to leave a little bit of runny yolk in there too.

Meanwhile, toast is being toasted. Tea is being brewed in the Bewley’s pot with real Barry’s tea leaves. Coffee is being brought along in the large cafetiere. There are cosies for both to keep them piping hot until they’re needed. The tea cosy fits perfectly. It’s like a little hat with ts own bobble on top and all. Someone knitted it for Patricia and it’s as old fashioned looking as it is treasured. The cosy for the coffee is another teapot cosy and it doesn’t fit well at all. But still it serves.

French baguettes from the shop, sliced end to end and buttered. J likes to construct an elaborate roll with everything laid mathematically inside. S hasn’t been up terribly long and settles for a roll with sausage in and a piece of bacon and black pudding on the side. Patricia likes eggs on toast, easy on the sausage, well cooked bacon, and tea. J and me have coffee. S and Patricia have tea.

Big white plates. Bigger than needed. You need room to move stuff around.

I’m sure Patricia would not be annoyed to see more of a veggie presence in the offering. Sometimes there’s a tomato or two but that’s it. Mushrooms don’t fit into this plan and beans always seem gauche and out of place. It’s a little meat feast.

I don’t eat an awful lot myself. A couple of sausages, a single slice of bacon, a single slice of black pud, occasionally an egg. I enjoy it but I get the most fun out of putting it together. Landing it all at once. It helps me remember it’s Saturday. I particularly enjoy the coffee.

It happens every Saturday at about half past one though usually running a little late. It’s lunchtime in the Armstrong household.

Quite right about the beans - baked beans are a blasphemy in a fry up, since they taint the flavour of everything else with tomato sauce. They make everything taste too sweet.

This has me craving a mucky fry ...as called in my family.
What's the vote on Brown sauce ?A total MUST for me .

Love a good fry up. It is crucial to maintain some kind of routine, I agree. One little tradition me and my wife have is freshly brewed coffee in bed on a Sunday, watching Countryfile and Gardener's world.

It hasn't been quite as strange for us as she works for the NHS and has been working throughout. Saturdays still feel like Saturdays but, with the kids at home, it has felt like an extended summer break. As much as I want them to get back to education and back to their futures I will miss this time of having them home all day.

I had a fry-up today. Not a massive one by any manner or means. I’m not allowed massive anythings these days. All I have to do is look at a Kit Kat and I put on a pound. Weight gain puzzles the hell out of me. My weight fluctuates between 12st 7 and 10lbs but I suspect it’s always 12st 7 and the rest is down to water and salt. The thing is I never consume 3lbs of salty water in any given day and I pee like it’s going out of fashion so where’s the extra weight coming from? And why can’t I get lower than 12st 7? According to all the charts I’m overweight and really should lose another pound but I’ve not been lighter than 12st 7 in, Christ, forty years, maybe longer; I was a big lad at school but never really grew an awful lot after I left. Anyway since I quit work I’ve had to watch my diet. 13st is my limit and as soon as I hit that I begin cutting back. The thing is there’s not that much to cut back on. A fry-up for me nowadays—this is so sad—comprises of an rasher of bacon, an egg and a small microwaved potato. Eight bites in total. Eight soddin’ bites! That’s not a meal. That’s barely an appetiser.

J, I'm not as anti-beans as you are but I would never offer to have them. If they arrive, I'd accommodate them. :)

Barbara - There was a lot of brown sauce in our house when I was growing up but I must confess I have lost the habit of it.

Marc: Exactly, I know I'm going to miss quite a few things about this awful time.

Jim: That's not a bad weight, I'd say there's a few pounds of beard in there. ;)