Still Raining in the Woods 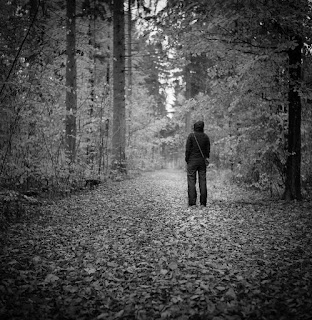 I got home from work the other evening and sat down to watch a bit of telly before dinner. On BBC2 there was this programme about a woman taking a series of walks through her home county of Yorkshire. I looked her up just now. Her name is Shanaz Gulzar and she’s a well-known artist.

The idea of the four-part series of programmes seemed to be that she would go on these walks, just her and her clever camera (more on that anon), but that she would approach the walks in a frame of mind that was completely open to all of the sensory possibilities around her. The one I saw was a fabulous stroll over beaches and cliffs into Whitby. Shanaz noted things like the patterns of the tides in the sand, the interspersing of wheat and barley in the fields, the butterflies along the path.

I must confess, I got quite hooked into it all.

But I have one other small confession to make.

The thing that initially hooked me into the programme was not the walk itself, nor was it the lovely sensory revelations along the way.

It was her clever camera.

As I started to watch the show, the deal with her clever camera seemed straightforward. She had it mounted on the end of a stick, a bit like a selfie-stick, and she held the stick in her hand as she walked along, talking up to the camera on the end of it. No intrigue there.

But (and I can’t emphasise how much this this exercised me) when we saw the camera’s view, we could see Shanaz and we could see her glorious surroundings, but we couldn’t see the stick. We could see her hand, and it was clearly holding some kind of handle, but the stick itself was invisible.

I was baffled by this. I started to watch really carefully to see what it all meant. There were a number of drone shots, which accentuated the walk and the stick holding the camera could be seen in those shots. Also, when Shanaz’s shadow was visible, you could see the shadow of the stick quite plainly. But the camera simply vanished it. It rocked my Wednesday evening world a little.

I was so engaged that I called my sons into the room. Look, what witchcraft is this? They were mildly engaged but not nearly as excited as I was. They seemed to accept that this ‘stick vanishing’ is the kind of thing technology should be expected to do these days. But for me, it was other-worldly, it was Pierce Brosnan’s car.

I was like this for 3D printers at first too, until I got used to them.

So, anyway, after the show was over, I looked it up. It’s all there on YouTube, easily explained. You arrange the 3D camera so that it points directly away from the selfie stick. There’s a little ‘blind spot’ right at the back which the camera doesn’t pick it up. It fills in the scenery instead. It’s a great effect when you see it for the first time though, as I did this week. A little like that first sight of the Vertigo ‘Beach Dolly-Zoom’ in Jaws. (That’s on YouTube too, if you’re bothered).

So that was it. The camera issue was resolved.

But the programme kind of stayed.

Shanaz had a got a lot from her walk. She studied stuff, she chatted to the fellow-walkers she encountered along her way, she sat by a cliff edge and recited a poem.

I resolved that I would apply some of the things she did, the next time I walked in a beautiful place, though maybe not the poetry.
Later that evening, I had an errand to do. I’d left the car on the forecourt of the garage and I needed to walk down there and drive it home. At around ten o’clock, the rain finally stopped and so I set off. I’d just crossed over the main road when a thought occurred. I didn’t have to wait for some exceptional, beautiful walk to practice what Shanaz had been practicing. Any walk would do. So, as I walked along, I kind of opened myself up to everything that was going on around me. As soon as I started doing it, I knew that it was something that I really don’t do very often. I tend to wander around with my mind full of stuff and I don’t often pay too much heed to what’s going on outside of my own head.

So, this little exercise was an eye-opening experience.

Everything seemed to very alive and vibrant after the heavy rain of the day. All the weeds and wildflowers along the roadside were giving off deep, earthy scents, their leaves weighed down with raindrops. And, most remarkably, although the rain had stopped half an hour before, the leaves of the trees in the woodland around the hospital boundary were releasing their droplets slowly.

It was still raining in the woods.

As I traversed the shortcut path along the side of the hospital and made my way down through the town, my mind wandered, and I once more forgot about sensing what was around me. I was firmly back in my head again. The whole exercise probably lasted no more than four or five minutes.

But I must try it again sometime. Perhaps this post will serve as a statement of intent. Pay more attention, Ken, look around you a bit more.

PS If you have access to iPlayer (I don't) you can enjoy Shanaz's walks here and also marvel at the camera. :)  https://www.bbc.co.uk/iplayer/episode/m000brvk/yorkshire-walks-series-1-4-bolton-abbey-to-simons-seat

I think I’m starting to miss going for walks. Walking and going for walks are, as you are very well aware, not the same thing. Going for walks was a big part of my childhood. I doubt a week went by when we didn’t go for one. A walk. Not a hike. And not really a stroll either. We lived then, as I happen to live now (by pure chance I assure you), on the very edge of the town. The countryside was two minutes away and that’s about what it is from here. We never walked down the town. It was to the country or the beach, occasionally the harbour. We’d walk and we’d walk back. The sights were just the sights we always saw. Maybe a horse would express a bit of curiosity in us but if that was the case that was a highlight with one exception, the day Dad and I saw the birds who’d been gathering atop Massey Ferguson’s office take off on their annual migration. The sky went black. It was really something else. Couldn’t tell you what birds they were or anything.

I honestly couldn’t tell you the last time I went for a walk. I’ve walked places that’re within walking distance but that’s not the same. I have noted that when I am out walking I’m not as interested in what’s going on as I once was. If a dog passes me and shows an interest I’ll pet it and it always pleases me when that happens but I tend to forget to say anything to its owner. Unless they’re growly dogs. The growly dogs were out again this morning as I was checking out the glade—I have no idea if it’s a glade but my wife calls it a glade and I’m not invested enough to even look up what a glade is—and so I headed off in the opposite direction tout de suite. Anyway I’m finding I’m enjoying my dawn reconnoitres more than I even expected I would. I like the privacy which is not something I tend to associate with outside nowadays. Between the ages of probably eleven and seventeen I loved wandering around places where you could see for miles all around and know I was the only one there. It pissed me off no end if I noticed someone in the distance. That’s what my very early poem ‘The Curse of the Summer Saturday’ was all about, the weekend invasion of interlopers into my world.

I don’t know how old I was—probably in my forties—when it dawned on me I was never alone for more than maybe five or ten minutes in any day. And certainly never long enough to enjoy the solitude. That was a horrible realisation. That’s the great thing about my weird sleeping patterns because I do get several hours every day where I’m by myself. And it’s definitely revitalising.

Ken, you would probably like the subgenre of 'walking tour' videos on youtube too. There's a lot of people with gimbals and HD cameras who walk around both city and countryside in realtime.

I wonder also whether, like me, you would enjoy the Corridor Crew channel. A bunch of young guys who make short films on youtube and share their working practices. I only mention it because they use a wide variety of clever cameras (and their youthful enthusiasm is infectious.

You've also inspired me to look around a bit more and spend less time in my head (and on youtube).

I had the very same experience as you a few months ago, Ken, when I saw one of these walks on BBC4: glad you explained it as I had been languishing since in my own private uncanny valley. Thanks for the blog: always worth reading. /F