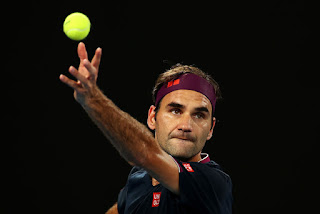 It’s Grand Slam Tennis time again and, as always, it’s a bit tough. Patricia is a huge tennis fan and a pretty darned good player too and she loves to watch tennis of all shapes and sizes but, particularly the four ‘Slams’ of the year; Australian, French, Wimbledon and the US Open.

They’re great to watch but, when you have to work all day, it’s obviously very hard to catch them live. You really need to record the matches, try to avoid the myriad of sports updates all through the day, and then settle in to enjoy in the evening.

It sounds easy, doesn’t it? But, actually, it’s a bit of a nightmare. It’s a nightmare for me because, being the closest thing to a tech-head in the house, I take it upon myself to record the matches that Trish most wants to see and have them available for next day viewing when she gets home from work.

The Australian Open is currently coming to the end of its first week and, frankly, it’s been exhausting.

Because of the time difference, the matches kick off around midnight, local-time, and then run up until maybe noon the next day. Nothing is seen live and everything has to be recorded. You never know exactly at what time a match will start, because it’s dependent on how soon the preceding match finishes. The only way to really cover it is to record both of the Eurosport channels all through the night and into the next morning. That’s a hella of recording, as the young folk might say.

Take last Thursday night/Friday morning, for instance. Roger was playing and, let’s be honest here, Roger is the Main Event in this house and has been for many years. To say that Patricia is a Roger Federer fan is a bit like saying I enjoy an occasional taste of chocolate. Roger is big in there here parts.

So I do my best to get the Roger matches. I work hard at it.

Thursday night before bedtime was a bit like setting a bear-trap to catch Roger. Both channels had every single programme set to record, even if one or two of them were not even tennis programmes. Matches overrun and programmes get shifted and the Sky box doesn’t always keep up. You have to give it a helping hand. So I even recorded programmes long after the match was due to end, just to be sure.

I called to the house at lunchtime, to check the recordings and make sure that all was in place for a stress-free evening viewing of the main event. There was Roger’s match starting near the end of one of the last recordings and then continuing on to the next recording, which was over four hours long. “That’ll do, Ken,” I said to myself, “that’ll do,” and made ready to return to work. But a niggling voice in my head kept pressing me. “Check it out, Ken. Best check it out.”

So I jumped the recording right to the end. Roger was still playing. It was a highly tense moment in a monster of a game. Who will win? Who will lose? Roger served…

The match had clearly overrun like crazy, even passing out the next programme I recorded. Thank heavens I checked it. Five hours of match-viewing ending like this would not be very nice. I checked the channel schedule for the rest day, there was no sign of the match being repeated. I tried to download the match from the online interface. Nope. I tried to subscribe to some streaming service where I might pick up that last few minutes. Nada. Finally, I saw that there was a highlights programme due to start at six o clock that evening. Roger was bound to be in that and they were bound to show the end of the match. Right?

Patricia came home at four and started watching the match. In any other sport, one would probably tell one’s spouse that the end of the recording simply wasn’t there but tennis doesn’t work like that. If I told Trish that the end wasn’t there, she would immediately know that it was a very long match and therefore a five setter. That’s a major spoiler for a tennis match. Tennis recording and watching back is full of unseen pitfalls like that. The length of the recording can tall you loads about how the match might go. Plus the coverage frequently cuts to the end of other matches to show you the last few points, which is a colossal pain in the ass.

It’s a jungle out there.

So I was at work, Patricia was watching the game, unaware of the sudden end that was coming just a few hours down the track.

I got home at six and started monitoring the highlights programme on my laptop in the other room while it was recording in the living room. Roger started playing on that programme. But would they show enough of the bit at the end and would I know before the recording currently being watched in the other room ran out?

As it turned out, the highlights programme covered the shortfall pretty well. I noted the time on the programme when the final set reached 7-4 in the Championship tie break and then I went and informed Trish.

“This recording will end before the match ends but, fear not, I have it covered.”

The recording ran out, as promised. I quickly switched to the highlights recording and entered the time where I knew the score was be 7-4. The match ran on to the end without any problems. Roger won.

This is what I tend to do and I would guess I’m not alone in doing it. As a 2020 kind of a guy, I don’t tend to bring chocolates, I don’t really send flowers. I do my expressions of love for my lovely wife through matters of technology.

I’d better go and get organised.

Enjoyed this almost as much as I'd've enjoyed what must've been a very interesting match indeed. Yours was the toughest marathon Ken and am so glad for Patricia you prevailed! Love all' to ye!

This weekend I bled the oil boiler to get the heating working. I'm a lot like you, that was my equivalent of a bunch of flowers.