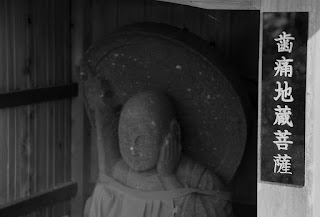 In fact, I’ve been away and I just got back. I spent ten idyllic days touring the windswept islands of Pain and Discomfort and, although it had its moments, I’m glad to be home again.

The weekend before last (Gosh, that sounds so long ago) was a Bank Holiday. I think my face must have known that and fancied a bit of mischief because, on Friday evening, just after everything useful had closed up for the weekend, one of my teeth started to kick off big time.

My teeth are generally very well behaved. They chew up all the dubious stuff I shove in there and they assist me greatly with the quality of my everyday smiling. But, once in a blue moon, one or another of them acts up and, when that happens, prompt action is required.

But there is no prompt action possible for a regular toothache on a Bank Holiday weekend or indeed, as it turned out, in the week after when my dentist – the best dentist in the world – is on a very well-deserved break. It’s was Friday before we finally got to meet up, my world-beating dentist and me, and even then the solution was not clear cut.

I have a thing, you see. I think a lot of people have it. I think a lot of people have a lot of my things. This particular thing is that I find it hard to accurately identify where my tooth pain is emanating from. I know it’s on the left-hand side, that much accuracy I can manage, but it gets difficult after that. Is it on the top or bottom? Back tooth or second-to-back tooth? It’s hard to be sure and, in fairness, the X-Ray machine was finding it similarly hard to be certain-sure too. So on that Friday visit we did what we could, using the fairly useless data I could provide. Some potential fixes were applied, fingers were crossed that these fixes would do the trick, and I went back to work.

Round about the time that everything closed up for the weekend, it was becoming increasing clear that the fixes were not going to do the trick. For that second weekend, I kept a diary of discomfort. By the time I got back to the world’s best dentist on Monday, my diary ran to four pages, the last page written on both sides… so that’s five pages, Ken.

I don’t want you to feel too bad for me. Hell, I really don’t want you to feel bad at all, I’m just writing here. The pain was by no means unremitting. In fact, it came in distinct waves, each of which lasted for ten minutes or so. The discomfort presented itself with a cheery initial, “Hello, here I am again,” followed by a fast increase in intensity and then a five-minute 'full on' session of hiding away somewhere with head in hands, wincing quietly, then finally a fade away and gone… until the next time two or three hours later.

Amazingly enough, even as I prepared to see the dentist again on Monday last, I still didn’t know which tooth was menacing me so. But before I went back, I made a concerted study of my mouth. Where was the pain? No, where was it really? If I could only tell TBDITW which tooth it was, then she could really help me. So I went to work and finally, after a series of grimace-inducing tooth clenches and a programme of solid taps with a biro on the suspect locations, I finally knew for sure where the errant tooth was. (It was lower left, right at the back (Wisdom Tooth) in case the lack of this knowledge might keep you up nights.)

I sashayed into the dentist’s office with my now redundant discomfort diary and the solid knowledge that I knew the where the troublesome tooth was. In 30 minutes she had me all fixed up.

I had promised myself that the world would be a fabulous place once the pain had gone. Everything would be in 70mm surround sound, 3D, with buttered popcorn. Everything would glow and shine. In actuality, I was something of a jumping twitchy hot mess for a fair few days after. Disaster seemed to lie around every corner and nothing was particularly good. I’m fine now again. I’m out the far side. Thank you for your concern.

I’ve written about it before elsewhere in these pages. I don’t think it’s necessarily right to simply say that people who deal with pain on an everyday basis are brave per se. We have to play the cards we are dealt if we are to stay in the game. But, here’s one thing for sure, those people who live every day with pain and who still manage to find joy and pleasure and personal development in their lives… they are truly brave. I see a number of such wonderful people almost daily on my social media meanderings. They get more done that I ever do. They see more and treasure more than I ever do. And they are in constant pain.

Kudos, people; you know who you are.

Me in pain, on the other hand, is a rather inward-looking miserable person. Largely silent. Not really caring much about others or about the bigger picture. Just struggling to get through and wishing it was all bloody gone and secure in the knowledge that one day soon it will be. A luxury that many people do not have.

So, apart from a rather boring account of me and my fairly average toothache, perhaps this post can also be taken as a hat-tip to those of my friends and family who deal with this shit all day, every day and who do so much better than I will ever do. They minimise the amount of time they dwell on it and maximise their lives.

I’m reminded of actor Jim Kelly who played Williams in ‘Enter the Dragon’. When asked (by The Evil Han (who else?)) about the possibility of eventual defeat, he replied.

"I don't waste my time with it. When it comes, I won't even notice… I'll be too busy looking good."

The title of this piece, ‘Ouch’, can also refer to that other pain that lingers around these days.

On Friday last, it was the shared birthday of two of my bestest friends, both alas gone too soon. Dear Una and Dear Simon, both of whom did so much better with their own trials than I did with my meagre toothache. Although they didn’t know each other, both are being remembered with joy on this their birthday weekend.

That part, at least, is as it should be.

Hmm. Teeth. Dentists. (Sigh.) [Long pause.] (Bigger sigh.) [Humongous pause.] (Deep inhalation.) I don’t talk about dentists. Politics, yes, if pressed, religion if we must, sex even but dentists, no, thank you. I could explain why and when it all began and my thoughts on school dentistry in the sixties but I’ve already said more than I want. Let’s just go with: Sorry you were in pain and I’m glad it’s behind you.

Pain I don’t mind discussing but, again, it’s not really a fun topic for a Sunday afternoon. I’m in pain right now. It’s a nagging pain sometimes burning but othertimes freezing, occasionally stabbing. Rubbing comforts it, drugs mask it but I’ve mostly I simply put up with it. To be honest I can’t remember the last day I was completely pain free. Probably 1993 and it lasted about an hour. I can say an hour because that’s how long it took to drive home from the osteopath and then I sneezed and put my back out even worse than it’d been before I’d gone in the first place. I’m trying to remember when pain was a novelty but we really have to go back a long time because once I hit my teens I was always bent over a desk for hours at a time and forty-odd years later I still am and accept the concomitant discomfort/pain as a part of the deal; I did it to myself.