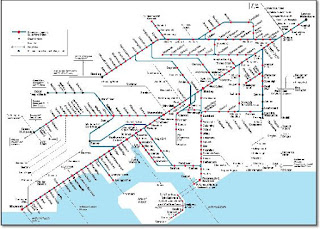 We arrived home after midnight from a journey to London to say a very sad farewell. When you feel that the person you are saying 'goodbye' to would have enjoyed the way you did it, there is some comfort in that.

During the few days I was there, as I traversed back and forth across the outskirts of London, a thought occurred that I’m sure I would also have had back when I lived there over twenty years ago. Back then though, there wasn’t the tidy frame of reference that I seem to have for it now.

Now we have Harry Potter, in all his incarnations and all his glory. Because of that, I can now say what I must have thought all those years ago.

Back when I lived in London, for my fifteen years or so, I did my fair share of Tube travel. In and out to the City Centre, wedged in, rocking and rolling in all of the heat and the interesting smells. It was okay, I didn’t mind it, if I could get a seat, I could always get some reading done.

But, in the latter years, my destinations seemed easier to reach by using the rail network. Similarly, this time around, I didn’t set foot on a tube. Instead I nipped from station to station along the rail network and enjoyed the ride.

Armed, as I was this time, with all my Harry Potter references, it was plain to see that the Tube was strictly a Muggle form of transport and the rail was for the Wizards.

In the books, the Wizards have their own peculiar ways of getting around. Sometimes they seem more clunky and old fashioned than the Muggles’ ways but that is only a superficial reading of the situation. The Wizard ways are fast and effective as well as being slightly quirky and other-worldly.

So it is with the rail system. It has about it a strange quality of being in a slightly alternate dimension to the rest of the city. It ploughs through the same landscape and arrives and departs from much the same places but it is slow and yet fast at the same time. High tech yet old fashioned. Familiar but still a  bit odd.

And the Wizards take the trains. They just seem different to the tube people. More given to noticing that you are there beside them. More prone to a smile. There is space on the trains and light. The staff at the stations seem more personable and, surprisingly for Wizards, human.

The train trundles and jangles and clatters and groans but it gets there and you arrive more neatly-pressed, slightly more sane than if you had gone via under the ground.

It all makes me wonder about buses. I think that buses might just be a little bit magical too.

I’ll try them out next time and report back.

I was sixteen the first time I took a train. And I loved it. Although my dad had a car when not everyone’s dad did and I appreciated the convenience of the car I was never passionate about them. I’m still not. When I bought my very first car and someone at work learned I had they asked me what kind it was. “A red one,” was my response and I wasn’t being facetious; I’d forgotten the make because it didn’t matter to me. As it happens it was a Talbot Samba and I can’t pretend I didn’t get a kick out of owning my own vehicle but, and I feel much the same when it comes to computers, it was a tool, nothing more.

A few months ago I went to visit my daughter who’s living in Cumbernauld for the moment. It’s a bit of a hick whatever way you go and so I thought I’d try getting the train home rather than the bus. They’ve changed. They’ve lost a lot of their elegance—trains were always classy when I was a kid—but not their magic. And by “magic” I think I mean nostalgia. As a child we often played in the local railway yard. Carriages, trucks and guard vans especially which were like peripatetic gang huts. They were never locked or anything. Nor was there any noticeable security—never once were we chased away. The trains nowadays feel are smart and clean and, since I never travel at peak times, I always get a seat but even though they’re a far cry what they used to be they still evoke a feeling of wellbeing and calm I don’t get with buses and cars.