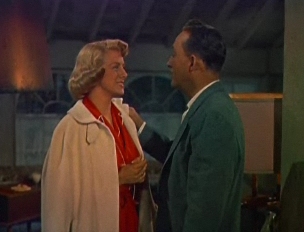 It’s funny, the things that stay with you. You can hear all kinds of things in any given week. Profound things, funny things, angry-making things but it’s always hard to predict which thing will stick in the recesses of your brain and take up residence there.

This week it was an old song that climbed in there and refused to budge. I only heard it once (well, twice if you’re being picky) and it didn’t start to play on repeat in my brain immediately. It was actually some days later when it showed up and commenced to kick the inside of my cranium.

I mentioned it very briefly in passing last week. I went to see Castlebar Musical and Dramatic Society  do their annual musical production. This year, it was ‘White Christmas’ and very good it was too. There was the song, right there in the middle of all the proceedings. Ronan Egan is a lovely singer but, even more than that, he get ‘get across’ whatever song he is singing. He can engage you in it and he can rather convince you that he believes what he sings. In one scene, his character meets the little girl, late of an evening, and learns that she is having some trouble getting to sleep. He has some advice for her.

“When I'm worried and I can't sleep
I count my blessings instead of sheep
And I fall asleep counting my blessings.”

Irving Berlin has always been good at writing with the ‘little drop of blood' that I’m always so keen on. So many of his songs are permeated subtly with that element of real sentiment and emotion. It’s no accident that the song ‘White Christmas’ can touch us on some subliminal level when the sentiment floating just below the surface of that tune is one of separation and longing and hope.

From reading up on it a bit, I see that Berlin visited his doctor to discuss his terrible stress and insomnia and his doctor asked him had he tried counting his blessings. From that came the song. And if you want a bit of random trivia that I picked up along the way to this post, Berlin is the only person to ever open an Academy Award envelope and read his own name out.

When I saw the song performed on stage, the week before last, I pretty much thought it was the high point of the show. Sweet and very touchingly-done. I enjoyed it and then I moved on. Or so I thought. I didn’t expect it to stick around as it has. And, boy, it has.

You’ll expect me now to say something like how I’ve now started to count my own blessings when I’m trying to fall asleep but that’s not quite the story here. For me, the song didn’t suggest that I do something new. Rather, it reaffirmed what I have already been doing for quite a few years now.

In bed at night, I read my book until the words start to sway and the story starts to intermingle with dreams and then I put the book down. In those potentially troublesome moments when the day’s failings or tomorrow’s stresses can start to seep back in, I always turn my brain to think about how damned lucky I am and I run through some of the myriad reasons why I am so fortunate. That pretty much ends my day. The rest is sleep.

And you may well say, ‘Look at that jammy git, he’s got so many great things going on in his life that he’s fast asleep before he’s finished running through them and I do, I really do. But we are all given a mixed bag, aren’t we? I could just as easily start listing off all the uncertainties and concerns that line up down the lane alongside all of the blessings. But that wouldn’t get me to sleep, would it?

Oddly enough, there’s not a single word in the song's advice that applies literally to what I do. I don’t ‘count’, I just sort-of think about things. Neither do I think of them as things that somebody or something has ‘blessed’ me with. I tend to think of the good things in terms of how fortunate I am. So, yeah, I sort of ‘list my luck’ rather than ‘count my blessings’ but even Ronan couldn’t sing that one.

So thanks to the Castlebar Crew for such a lovely and memorable musical this year. I’m still singing your song in my head and I’ll continue to take the very good advice contained in there for as long as I can.

I saw that photo and "heard" that song. It's a nice sentiment we could use more of.

A girl's brain is often hard to turn off prior to sleep. It wants to make lists, To Do lists that never seem to end. Think I'll try adding you to my mental list of things that make me happy.

I think I dislike the word ‘blessing’ because of its religious connotations. The instance that always comes to my mind is that of Esau and Jacob where Jacob disguises himself as his brother in order to get his father’s blessing and then when Isaac discovers he’s been duped instead of simply withdrawing his blessing he tells Jacob that’s it, no blessing for him. I never got that. It’s not as if a blessing’s a physical thing. He believed he was blessing Jacob so why wasn’t Jacob blessed? And what the hell did it matter anyway because it’s not as if the recipient suddenly got luckier or something. If I’m counting my blessing who exactly is that’s conferred his or her blessing on me? Yes, I know, it’s just a word but words matter. And here’s another one: how many times in his life must your average Catholic priest respond to the words, “Bless me Father…”? Thousands! Do blessings not count for anything nowadays?

Being the negative sort of chap I am rather than counting blessings I usually try to imagine what I have to complain about. I suppose that comes from my mother who was always quick to remind me there was someone else worse off than me somewhere in the world. And I guess that’s mostly true but logic dictates there must be some bugger somewhere for whom nothing could get any worse and yet he too likely imagines there’s someone out there with a shittier life than his. Whatever gets him through the night. It’s true, there’re a lot of things in my life that could be shittier than they are right now. Most things could be better but I guess that’s true of most people too.

I’m sure I’ve see White Christmas at some time and yet I associate the song with the earlier film Holiday Inn which I know I’ve seen many times. My father was a huge Bing Crosby fan. He liked to think he could croon like him and he did his best but I’m sure he sounded better in his head although he could carry a tune; both my parents could. As an aside: the first song I sang my daughter (when she was minutes old and I got to hold her in my arms for the first time) was ‘Too-Ra-Loo-Ra-Loo-Ral (That's an Irish Lullaby)’ which I probably first heard Crosby sing in Going My Way; my ‘Bing’ wasn’t as good as my dad’s but I did my best.

I bet yours was the finest rendition ever.