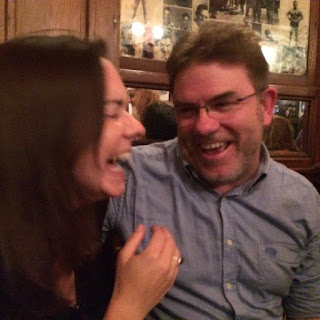 On the way over I flew the plane, just like I usually do.

Of course, I don’t mean I actually flew the plane, I just sat in my seat and paid close attention to all the workings of the flight. The angle of the wing flaps outside my window, the subtle interactions of the flight staff, the level of the clouds far below.

I’m not a particularly nervous flyer but I often have this almost subconscious feeling that the flight somehow needs all of my attention, focus, and help in order to proceed satisfactorily.

This week, I went to London to see some old friends.

It was the archetypal ‘flying visit’. Getting in one afternoon, gone again early the next morning. There was no particular event or anniversary. It was just a confluence of calendars and train timetables that meant some people could all land in a Soho pub at the same time and have a drink or three. It turned out to be a truly lovely evening with truly lovely people.

There are, of course, some other people I would dearly like to meet up with and someday, hopefully, we might manage it. But this particularly thing could only have happened if it was short and fast and very, very small. The alternative was that it could not happen at all.

For some people, the oddest thing about this would not be the meeting up or even the travelling to do so. It would be that a few of us had never-ever met up in person before. For my part, I had only ever shaken hands with one person in the room. Still, I knew them all so well. They were friends, the best of friends really. For eight or nine years now, we have come to know each other across the expanse of Social Media. Not in any intense, phosphorescent way but rather in that long term slow burn that comes from stories and small happenings and music and sadness and fun.

People who don’t know any better might well say, “Ack, those are not friends at all. They are strangers and the meeting you describe was just some pathetic exercise in novelty and futility.” How wrong anyone who thought that would be.

It is true that there is some danger in jumping to conclusions on Social Media about who is a friend and who is someone who talks back to you when you speak. But time addresses most of those questions. By my own little definition (hard-worked-out) if your heart swells a little at somebody’s good news and shrinks a little at somebody’s bad, and if that feeling is in some measure reciprocated, then there is friendship there. It helps, too, if nothing more is needed from the friendship than just that. That there is never anything more to lose nor anything more to gain from the friendship than the friendship itself.

Perhaps friendship, in the end, is a bit like a boomerang. You throw it out and if it comes back, it is probably real.

Whatever about any of that, we had a lovely evening. There were laughs and smiles and stories and gossip and, if I am anything to go by, a subtle level of fascination at how people are a little different in the flesh than they are on a computer or a telephone screen. How there are aspects to them that one would not normally see across the social ether. But because they are good friends, all those little differences only serve to make the people even better than they were before.

There is, apparently, a drug that is released through increased levels of human interaction and eye contact and such. I don’t know much about it although Joe Hill’s book ‘The Fireman’ talks about it quite a bit (and is also very good.) It’s called Oxytocin. I think I may have overdosed a little on that drug the other evening. In these few days that followed, I have felt somewhat elevated and empowered and with a slightly better regard for myself than I would normally have. Is that crazy? It seems even more likely because, now, three days later, it finally seems to be wearing off and its absence seems to conversely help to prove its existence.

To widen it out a bit. I think it’s a good thing to reach out and meet up and bond a little, particularly with people you regard highly. I think it’s like a small work-out for the soul.

I think, in the tight airplane seats from which we view the world, many of us share that feeling I had. That we all have to watch everything warily all of the time to make sure that the world continues to fly okay. If we take our eyes of the bigger picture for a moment, if we stop reacting and worrying and fretting, then everything will somehow fail.

It ain’t necessarily so. Take a moment, trust the auto pilot for the shortest of times. Have a slice of pizza or a slim glass of Prosecco or a languid stroll in a park. The world will glide along by itself for those few moments and, when you come back, you’ll be stronger and better equipped to make sure it continues to fly right.

Let’s do it again some time.

On the flight back, early the next day, I read my book and listened to my old classic ipod and didn’t pay very much attention to anything else at all. The plane was okay. We got home just fine and thus a singular day trip was successfully completed.

Hahahaha (nervous laugh).... flying! I haven't flown for years, keep thinking I must do it but never do. I would be watching the flight with intense paranoia. I will do it again one day, but for now I convince myself that taking three times as long to go on the sea and feeling queasy until back on the land is somehow preferable. Fran

Today’s the tenth anniversary of my blog. As you’ll see I don’t make a big deal about it. In fact I think I’ve only ever mentioned once in a post that I’ve hit a milestone (the seventh, as I recall) but that’s me. I have two more posts left and I’ll be done. I had planned to end it all today but I was sick a while back as you know and missed a post but I wanted to end my run of poems with the only poem I wrote in Aberdeen. It marks the end of another chapter in my life and is a good place to end. Besides it’s not a bad poem to go out on. And then there’s my farewell post which Carrie’s read and approved so I’m safe there, no typos and no embarrassing faux pas.

Over the last ten years I’ve communicated with a motley crew which the dictionary defines as “a roughly organized assembly of individuals of various backgrounds, appearance, and character.” We never quite managed to band together but occasionally we came together and, like you with your friends, enjoyed the moment and the crack before drifting off. After ten years you’d’ve thought I might’ve managed to hang onto more friends than I have but it proved harder than I ever imagined keeping up with people when you only communicate in written forms. I thought writers would relish this and I do think we do. It’s just writing takes so much effort, hours to produce something we know’ll only be read—skimmed most likely—in a few minutes. It all becomes a bit of a burden. And it’s especially hard when you live a life as quiet as mine where nothing happens: what’s there to talk about? Which is why I appreciate your blogs because they provide a topic of conversation or, in real terms, a writing prompt. This week, Jim, you have to write less than 4096 characters on the subject of friendship (and maybe a bit about planes).

I don’t have many friends. On paper, yes, I’ve friended more than my fair share but the Internet has devalued the word. No one should have more than a handful of true friends. Friendship, true friendship, should be earned and deserved. Of course we use the term loosely. If you met someone in the street and were introducing them to your wife you’d quite likely refer to them as “a friend of mine” and not “some bloke I knew a while back but not that well and certainly not well enough to be arsed keeping in touch with.”

I met Carrie online—that’s no secret—and for the last twenty years she’s been my best friend ever. So I’m not anti-Internet. But I do think the misuse of the word “friend” opens the way to more disappointment than anything else when they (or we) don’t behave like friends ought. In my naiveté I got burnt more than once over the years. But that’s life. I eventually learned to distinguish between e-friends and true friends and lo and behold it turns out I do only have a handful of real friends that I met online. A couple more than I ever had at one time in real life. Par for the course. Of them I’ve met a couple in the flesh and spoken to another over the phone once but that’s it. One day I’d quite like to have a coffee with you but not in a crowd because I don’t fare well in crowds. I’d even get on a plane to come and see you—good boy, Jim, managed to squeeze the plane in there—even though I’m not fond of flying but then I’m not fond of ships either but at least the plane journey would be quicker.

You should always have a very high regard for yourself Ken, what a lovely post x

Ken, I've enjoyed reading this almost as much as I enjoyed seeing the photos of you all together laughing and chatting. The warmth just shines though your words and the photos. I'm glad you got to meet everyone. I took gerry from this.

This last year I attended a wedding of two dear friends who I met on Twitter 9 years ago. A couple of summers ago we traveled the U.K. with another, also Twitter. I could feel pages with stories like this. I have made true and genuine friends via social media. I don't think in real life is necessary for true and genuine bonds. Although I definitely love and appreciate when it happens. Social media is not quite what it used to be for me but I will say that it has blessed and enriched my life. I have friends that I have known for almost a decade through words only. I look forward to the day I can give all of them a hug, well at least those who want one.

Very special post Ken and my favourite of all your posts that I've read. Thank you for re- sharing