Words are Pouring Out 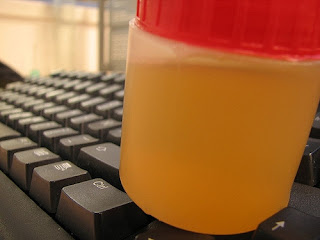 And when I finish one writing thing, I get to start the next and that’s often a great relief.

That 'next thing' has been crashing around in the old head for a while now, generally demanding attention. Suggesting little snippets of insight, dangling a tantalising notion or two, but mostly generating a measure of unease. Will I be able to write that thing, when the time comes? How on earth will it all fall together into some coherent shape?

It’s something of a relief, then, to finally get to the moment when the next thing can be started. It’s also a relief, almost physical, when the words come pouring out. It’s very much like drinking pints of water and not being allowed to go to the toilet for a while. The well of small ideas has been visited and visited but no relief has been granted. So, yeah, words tend to come pouring out.

And a measure of order too. That’s the most surprising thing. While the mind has been assembling various component parts, and the brain has been worrying about how it might all screw together, the subconscious must have been tinkering away too. When the physical writing starts, I often find that decisions have already been made, decisions I really knew very little about. An order is rapidly achieved and the words come pouring out. It’s a halcyon moment.

And how crucial it is to not stop and think too hard about what is pouring out. Not now. Let it flow, baby, just let it flow. It’s a time for forgiveness of all things. A time for doing anything and saying anything, just so long as the flow keeps coming. Drain the brain. Get it on to that page at all costs.

And the stuff that comes out can be quite emotion-bringing and visceral. Just yesterday, as I was typing the flow of uncorked words, the damn stuff was making me nervous just because the set up was quite an edgy one. I was worried how it would all turn out and who would get hurt and would they be okay after. Actually really worried. I raced through the scene with my pecking fingers, trying to arrive at a place of some resolution where I could breathe a bit again. It was odd.

And today, the flow will continue. I can feel it clearly in my fingertips and in the base of my skull. These words I’m typing right now are not the words I should be typing. The right words are crashing around and tickling and struggling to get the hell out. So stop, Ken, stop. Go and write the right stuff and stop this dicking around.

Just one more thing and, as Hamlet said, “Meet it is I set it down.” What was it again? It's difficult to focus. Those other words are making a lot of noise and turning my head.

The mistake so many people make…

Of course we all know it isn’t wondrous. It isn’t the best, not to anyone but you at least. We all know that first drafts are shit and that the good work is now only beginning. A block of wood has been created from nothing, as if by magic, but now it needs to be carved and sculpted and shaped into something a bit fine.

We all know it.

But, man, how we forget it.

We are charmed, bewitched by our tall beaker full of product. See how it gleams in the pale moonlight. We take it door to door and show it to our friends and they (being our good friends) confirm for us that it is indeed wondrous and we are indeed magnificent human beings for creating it. We smile and bask in the reflected light from the jar while, inside, our friends secretly shrug and shiver. For all they can really see is a big jar of piss.

And so, on with the flow. Long may it continue, long may it go.

Just don’t fall in love with it, Ken. Not this time. This time, remember that there is still much work to do after the flow has stopped.

And, oh, what's that? In the back of my head tickling gently?

Damned if it isn't the thing after this one.

None of my first drafts were ever shit. Nowhere near it. They got better with editing but I doubt there’s a published novel out there that still couldn’t be improved. One day you just have to let them go. That said I do understand where you’re coming from especially all the stuff that goes on inside you that you (the conscious you) seems to have no control over. (You’ll see how I develop that in The More Things Change.) That said I do get the gush. My first two novels really did pour out of me. The fourth wasn’t too bad but numbers three and five were hard work. What I find amusing is despite what we’ve produced—you know I can write novels (plural) and I know you can write plays (plural)—we still doubt ourselves the next time we get an idea worth pursuing. I wonder why that is? I wonder if Steven King feels that way too. I would like to think no matter how much I get to write before I die I never get cocky about it.

This post has reminded me of something I was thinking about a few days back. I remember walking down the beach near my parents’ house picking up white pebbles. So many lovely white pebbles. Eventually my pockets were full and I trudged home. Emptying them out on the kitchen counter, however, I was so disappointed in what I saw. None of them, not a one of them, was nearly as lovely as I’d thought it was on the beach. They were all flawed and misshapen and I ended up throwing them all away. There wasn’t a single one worth saving. I think that’s why I’ve got into the habit of letting my prose settle for a long time before I even think about editing it. Yes, of course, I let my wife read the first draft and I used to let my daughter read them although since she grew up and got a life of her own she’s fallen out of the loop. But that’s it. And Carrie is not, as I’ve mentioned before, one to massage my ego which is good; we don’t need false praise.