Ain’t Got No Spit 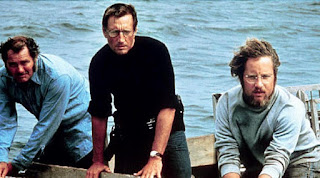 You know the scene. It’s from one of my favourite films ever.

Hooper is going down in his cage, as a crazy last resort, to try to poison the Great White Shark. Just before Brody and Quint finally lower him into the depths, he tries to clear his diving mask.

I feel like there’s a Great White Shark loose in the water and I reckon I may have to face up to him in my own stupid little way. I’m ready, I guess. I know what it is that should be done.

I just ain’t got no spit.

The metaphor is sound enough, I think. The ocean is Social Media in general, the cage is my own meagre presence there and the shark… well, you know what the shark is.

Over the past weeks, I have vacillated about going down in the cage, even to just watch the shark as he stalked around, never mind to rail against him. It’s tough down there, the air is very stale and tinny and the pressure pinches hard on my nose and temples.

These past weeks, I’ve tried just hiding in the wheelhouse and hoping that the shark will just go away. But it isn’t going to go away, is it?

It’s been fed now and it’s emboldened and the taste of blood is on its tongue.

I guess I just have to go down in the cage. I know that I can’t possibly hope to stop it or even to slow it down in any way. All I can do is present myself before it and say, “Hey, Shark, I’m over here! You can eat me if you want but you’ll have to do so knowing that I am against you.”

Maybe I’m actually wrong. That would be nothing new if it were the case. Maybe this is all just another in a long line of over-dramatised political games. Maybe the hype and the constant battering of awful news and opinion has finally got into my head. That’s what I tended to think, until yesterday. I almost seemed to be thinking of it all as just another storm, something to shelter from until it simply blew over. I had pretty much resolved to hang out in the fruit cellar with a lantern and a good book until the whole stupid hurricane has passed. Then I was planning to climb out and tidy things up as best I could.

But, this weekend, I think I feel differently. All that talk of ‘Enemies’ and ‘Tombstones’ and ‘Carnage’. And today too. The orchestrated dissembling about how many people were at an event. The never-ending aggressive campaigning when the campaign is over and apparently won.

It’s not a storm, I now reckon. It’s a shark. And it’s not going away. Not anytime soon at least.

Until today, I had sealed my cage tight shut. Any mention of certain people and certain events had been blocked and filtered as much as I could. Today, I feel I have to stop all that. I have to open my eyes wide and try to see what is going on. It’s not always easy because many of the people who are allegedly against the shark can fight pretty dirty too and everything they say cannot necessarily be trusted as being the truth.

So that’s it. I’ll go down in my cage as much as I can and when I see the shark do its thing I’ll shout ‘Shark!’ even though I won’t be heard much through all the murk and the turbulence. I won’t make much difference.

Maybe, though, if we all go down in our cages and if we all shout at the shark when he comes, teeth bared, maybe that will make some kind of difference.

Who the hell even knows?

I just ain’t got no spit.

I have spit, but I was brought up being told it was rude to spit. Although I'm not sure the shark pays mind to manners. So far I am impressed at the wonderful mass protests I have witnessed world/oceanwide conducted with respect and solidarity. It has given me hope that the Brodeys among us may just beat the shark. X

Only a few hours in to my 'down in the cage' endeavour and, already, I have to think again. I conveniently forgot that Social Media is a time waster of the highest order and to open oneself to every Tom, Dick, Harry or Dick (there's a lot of Dicks) is not a very good idea.

I'll go down in the cage, see what the shark is doing and shout about him where necessary. Then, for continued sanity, I will get the hell back to the surface and breathe deeply.

Hi K, You're right, the protests have been uplifting and also quite effective I think.

I don’t think that social media is simply a waste of time, Ken, I actually think it’s detrimental to our health. Almost all my Facebook friends are writers and when I first came online I felt like I was in some kind of paradise surrounded by people who were like me and liked me for being the me I liked to be. All that’s changed. Every day I have to wade through shit to see if there’s anything uplifting, anything joyous and there usually is but by the time I get to it the damage has been done. I love the new one: alternative facts. Wonderful. Just wonderful. Trust is not especially fragile, it’ll weather more than a few storms, but once it’s broken things can never be the same again. In this post-truth world no one trusts what they read or even what they see. It’s depressing. No, I don’t think depression covers it. The word I’m looking for is grief. We’re in mourning. For the truth. There were a lot of deaths in 2016. I guess that one slipped by unnoticed.

I read somewhere—somewhere on Facebook—that Trump isn’t the problem, he’s a symptom and that really does hit the nail on the head because if you stopped reading the American news and only suck to what’s going on in your own backyard you can’t help but feel the same. Who can you trust? You don’t trust sharks for starters. I’ve never understood people who allow themselves to be lowered into the ocean to watch sharks. I understand why professionals would take an interest but not ordinary blokes like us.

I’m about the least political person on the planet. About the only thing that interests me less is sport. But I always thought that democracy was a good idea and communism was a good idea on paper. I’m not sure what form of government we have in the west these days but it’s veering dangerously close to mobocracy. And mobs scare me way more than sharks.