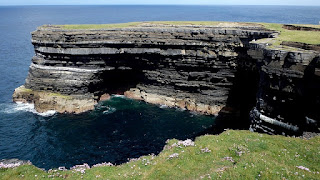 For various reasons, I’ve been spending a couple-or-three days at Downpatrick Head this month. I’m actually just providing a bit of transport and backup to my son, who’s doing something there so, although I’m there for seven or eight hours, I have absolutely nothing to do. I am left to my own devices… without any devices. In many respects, it's my summer holiday for this year and I'm treating it as such.

Downpatrick Head is a coastal headland here in County Mayo and right on the western edge of Ireland. The next stop is New York. It’s basically a field or two that runs right to the edge of the Wild Atlantic Ocean which terminates, without fence or barrier, in a series of sheer rocky cliffs with rocks and crashing water below. Most notably, there is also a highly photogenic sea stack called ‘Dun Briste’ and a deep, dangerous, and remarkable blow hole.

I’d never been there before. When I first arrived, I walked up the field from the car park and I looked down the blow hole and had a look at the highly impressive sea stack and then came back down to the car park and read my book.

It was great. Except for one thing. I hadn’t really seen the place at all.

As the hours shuffled on and having finished my book, I went back up the walkway for another look. This time, I took it slow. As I walked further along the precarious edge of the cliffs, I found there was so much more to see. Stuff I hadn’t even been aware of during my first glance.

The cliffs, for instance. The cliffs went on and on, much more then they appeared to at first glance. What seemed like boring fields broke away into amazing precarious sheer faces. To go too close was to feel an actual vertigo and the pull of the wide world on your feet.

The birds were not there the first time I looked. The cliffs where they congregate are further along and are not the ones you see if you only run up and glance and then run away again.

The days I was there, it was all Gulls. Lots of them, soaring around and protecting their cliff-embedded nests, each of which contained a single plump chick.

It was the gulls that really made me stop. I became a bit hypnotised by them I think. I watched a lone chick for God knows how long, waiting for a parent to return from the ocean with food. I watched another pair defend their nook as gull after gull swept in and tried to land on their patch. I spend literally hours on the edge of the cliff, watching the birds and the sea and the sky, breathing the air, feeling the breeze.

Because I had a little time, I stopped and the place seeped into me in a way that no momentary visit could have ever achieved. A place where one could easily stop and take a photo and run away again became, for me, a total sensory experience that I think has been embedded in memory for life.

I have one more day left there. I can't wait to go back.

The moral of this piece is therefore the simple Ferris Bueller one, made real for me on the edge of an Atlantic precipice.

“Life moves pretty fast. If you don't stop and look around once in a while, you could miss it.”

I miss the sea. It’s hard to credit it but I probably haven’t set foot on a beach in almost forty years. Forty years. I need to let that sink in for a minute. Basically what I’m saying is that after I got married I never went to the beach. That can’t be right. And yet I’m struggling to think of any instance after that. Did I never take my daughter to the beach? I can’t remember. As a child that’s where summers were spent and we even went in the water. Which all seems so alien now. I’ve taken my daughter swimming—in a nice, clean indoor pool—but not to the sea. Or maybe once. I have a vague recollection of her paddling in the water. Right up until my teenage years I was rarely away from the shore especially after the crowds had gone and the place was pretty much my own apart from the odd hardy dog walker. I could pretty much guarantee that most of the time I’d be alone or as good as alone and I liked that. I mean you can be alone in a busy shopping centre—aloneness is a state of mind after all—but I like the added dimension of physically being on my own and knowing that there was probably no one else within a square mile of my vicinity. I can’t say I was a big nature buff for all I was surrounded by the stuff. If I saw a hare or something it always pleased me but I never went looking for birds’ nests or anything like that. But the sea itself always impressed me and often calmed me. Occasionally I listen to ocean sounds off YouTube or rain. I like jungle or country sounds but they just gets the bird stirred up as he tries to compete. I never took a Walkman with me down the beach and even thought I have an iPod-thingy I never take it with me when I go out these days. It’s good to get away from all kinds of artificiality even the more melodious kinds.