The Last Days of Jack Sparks – Lord Arnopp Aces It 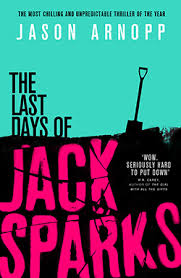 I’m going to get a nasty reputation for myself out of all this. I just know it. I’m going to get a reputation as a guy who clings sadly to the coat tails of all the successful writers here on Social Media. A puny little rat whose only gratification is this lark of pretending he knows great writers.

Ah well, if the cap fits…

But it didn’t start out like this. Oh no. It started years and years ago on Twitter with a brace of naturally creative folk who often chatted to each other, just for shits and giggles. As the years progressed, and the chatting waned somewhat, an impressive proportion of this loose cohort stepped up to the plate to make tangible waves in the wider world of writing and general creativity. I won’t start naming names but you probably know who they are and there’s more of them on the way, just you wait and see.

I sometimes equate it to a ‘Cambridge Footlights’ type of a set-up. A bunch of precociously talented people naturally migrated, for a time, to a casual ‘Bauhaus’ of creativity and then moved onward and upward. Of course I don’t place myself on this team. To continue the analogy, I was lucky enough to be an audience member at the ‘Footlights’ as it was all kicking off.

The latest of this mob to step blinking into the limelight of the Big Game is Jason Arnopp whose novel ‘The Last Days of Jack Sparks’ is currently wooing all comers.

No no no. Wait. Strike that.

I reckon that Jason never once 'stepped ‘blinking' into anything in his entire life. If he’s coming in, he probably going to boot the door down or, at the very least, push the door open with his bum and ease inside with a quirky smile and a killer line or two.

Neither is Jason some feckin’ ‘Johnny-Come-Lately’, stumbling short-sightedly onto some ill deserved pot of gold.

No, sir. Jason has earned these spurs of his. He’s been putting in the hard yards and filling the sweat buckets with his writing work for many the long year and seeing him righteously ascend with his new book is a joyous thing to behold. Respected commentators and celebs alike have queued up to sing the praises of this tome and, only in the last few days, it has become the current choice for the BBC Radio 2 Book Club. So, while the entire listenership of the BBC is having their eyeholes opened by the book, you can have a go at it too.

Fuck all that, Ken, is the book any good?

‘Jack Sparks’ is a horror novel. This works because Lord Arnopp is literally steeped in horror. He has studied and immersed himself in and rolled about in horror all of his life. He is, for want of a better phrase, a big bucket of horror. And his novel is like a peeled pear, dropped into this big bucket of horror and left overnight and then lifted out and squeezed gently onto some virgin pages. It’s reverential, informed, knowing horror and fans of the genre will lap it all up like one of those post-modernist toothless vampires we see now and again.

But, wait once more, ‘Jack Sparks’ is not a horror novel or, if it is, it is also so much more. Whilst being scary and bloody at times, Jason’s novel also goes much further. It captures the zeitgeist of the social media era like few other writers have managed to do. I was reminded of Jay Mcinerney’s debut novel ‘Bright Lights, Big City’ which tasted the 1980’s in much the same manner as Jason sips at the 2010’s. Jason explores the paradox that sits at the heart of Social Media. Although it is hugely interconnected and vibrant and buzzy and alive, it can also be a wasteland of loneliness and pain and poison and negativity. Jason sees sees both of these sides and, out of this seeing, he creates a character who is effectively lost in the depths of Social Media, who pursues an adventure that is often several steps removed from truth and reality and which is probably, ultimately, a lie. This is a strong metaphor for we the people born of the internet age.

Jack Sparks himself is a wonderfully unreliable witness. His narrative is periodically debunked by his friends and family as he races from event to event. But are the friends and family reliable themselves? No straight horror novel this, it is rather a complex quilt of lies and betrayals and foiled drug-fuelled ambitions.

Jason has pushed far beyond what he needed to do to write a successful horror novel. Like the best of writers, he has mined his own life experiences to try to find the truths which lie there. The ambition of the writing extends well beyond the street-smart japery at which he clearly excels. Knowing the little I know about Jason and his life, I can see traces of Jack Sparks in there. The Heavy Rock, the Journalist, Brighton. It might be hard to know where Jack starts and Jason ends if it weren’t that Jason is such a good guy and Jack such a burk.

Another book I was reminded of, while reading this, was ‘The Third Policeman’ by Flann O’Brien. I’ll bet that Jason doesn’t even know of this book’s existence, it being rather Irish and maybe a bit Niche, but the concerns of life, death and eternity were tackled there too and these are big concerns and it takes a big writer to go after them with this level of humour and with no small measure of sympathy too.

Jason’s book is extremely savvy, sharp, witty, observant, clever and, yes, dammit, good but it is also something a bit more. It is a metaphor, perhaps, for how we can become lost in ourselves and, if we allow that to happen, how hard it can be to follow the breadcrumbs back to safe ground.

Jason is currently working on a second novel. I, for one, can’t wait.

What choice do I have?

I think we all know I’m a bit of a literary snob. And I am. I admit it. I think it’s because I’m not exactly what you’d call a voracious reader unlike my wife who just hoovers up books. I have no idea how she does it. If I’m going to devote time to a book I like my time to count. The book I’m reading at the moment is 150 pages long and it’ll take me three days which is why I stay clear of anything over 300 pages if I can avoid it. I see this one comes in at 336 pages. That would be enough to put me off right there. I would really have to care about a book these days to read 336 consecutive pages. Secondly, you used the h-word. I’m really not a fan of horror fiction. I’m not a fan of horror per se but I really struggle with it on the page. Maybe I don’t have much of an imagination. I’m not good at visualising things. So spend a page and a half describing a monster if you like and all I’ll hold in my head is “monster” and it’s not a very scary word. Monsters crop up in kids’ books all the time and they’re mostly wee honeys once you get to know them. I did read some reviews of the book and the general consensus is that it is funny. Well, we like funny and funny translates into words much better than horrible. So that’s a plus. Anyway this is the first I’ve heard of Jason Arnopp. He must live in a different circle of Social Media from me. I have read The Third Policeman although I think I preferred The Poor Mouth. I haven’t read At Swim-Two-Birds and I think I’d rather read that than The Last Days of Jack Sparks. Actually, no, I think I’ll plump for The Hard Life as it’s half the length.

I remember my pal, Alan, looking at me in bemusement when I was reading The Shining as a teen.

Well of course...when it's The Shining, that is exactly what happens! I know which book I am presenting as my next choice in my book club. Thanks Ken :)

Hi Caroline. Nice to see you there. :)