A Film and a Book 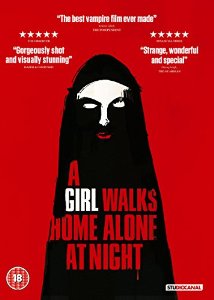 It’s my long weekend Summer holiday so I’ve been celebrating in fine style by watching a movie that was just for me and finishing the book I’ve been reading.

Here’s a few thoughts about both.

‘A Girl Walks Home Alone at Night’ is a movie about an Iranian Vampire. I’d been wanting to see it for some time because the things I heard suggested it was strange and nicely off-the-wall an generally good. Plus I like vampire movies.

I liked it. Right from the start, it sets out to tell you that it’s going to be a bit wacky. The first thing we get is a Jim Jarmusch style landscape which is sung over by an sort of a Iranian Tom Waits tribute act. There’s a classy old car and a wide wide vista in glorious monochrome and we start to know where we are. We’re in Iran, American style.

Which is kind of  funny because the film was apparently shot in Southern California with that location doubling as an Iranian town called Bad City. Nothing is quite as it seems here. Even the repeated shots of oil mules furiously drawing oil from the land, which seem to be a conscious reflection of the blood draining from the lonely vampires victims, even that seems playful when one knows it’s America we’re looking at and not Iran.

Best then, perhaps, not to think too hard about what it all might mean and just go with the glorious flow – be it blood or oil – of iconography and pop culture that is on show here. The mysterious vampire girl in her traditional ‘Chador’ is reminiscent (for me, at least) of ‘No Face’ in Spirited Away, a graceful, inexpressive presence who can, by turns, be sad or filled with malice and who moves us with the very was she looks.

Comparisons abound with ‘Let The Right One In’, which remains one of my favourite films. The story is essentially the same. Lost boy meets enigmatic night girl and they must decide if their mutual need for each other is enough for them to give up everything else. Here, it is told with wry humour and slow pacing, with loud music and graceful quirkiness.

It’s the kind of a film my Dad would have watched and then asked, “what was that about?” and I would know what he meant. For my own part, I enjoyed the strange ride and feel this one will reside quite a while in the memory.

As for the book, ‘End of Watch’ is the third and final part of Stephen King’s detective series featuring Bill Hodges, retired cop and ageing good guy. Regular readers of the blog (Hi Jim) will know that I’ve grown up reading Stephen King and I love the sheer clarity of his writing, regardless of what he writes. I believe he’s influenced the way I try to do things myself and I make no apology for it. The man is a heavyweight of American Letters and a real person to boot, that for me is a potent mix.

The first book of this crime trilogy, Mr. Mercedes has, I believe, a truly brilliantly-formed opening chapter. I shook my head in awe when I read it. The book itself is good, it rattles alone and the overall effect was a positive one.

The second book ‘Finders Keepers’ seemed over concerned on exposition whilst moving inexorably toward an expected conclusion.

This third book hasn’t quite done it for me either. This time, Stephen King pulls in some of the supernatural elements from his earlier writing. While I have no problem following Mr K wherever he wants to take me, the cramming of an ethereal quality into this already-terraformed world of police procedural and real life crime makes for an uneasy fit. It’s almost as if Mr. K feels this too as he goes to great pains to try to validate some of the more fanciful turns of the story inside the gritty gumshoe box he has constructed. For me, the ‘Weird’ doesn’t quite fit. Characters who would never believe ‘strange shit’, come to believe ‘strange shit’ with some ease out of plot necessity.

My main issue with these books is not with the central character himself, as a matter of fact, I like him. I’d say there’s a lot of Stephen King in old Bill Hodges. He creaks and he aches and he knows the best is done with now but still he ploughs on and brings home the bacon every time. No, Bill is aces in my book. It’s his ‘team’ that I have less time for. The two characters who back Bill up in his quests have never gelled successfully for me. Holly is not too bad, she is strong and sympathetic, if a little monochrome. Jerome doesn’t play at all in my head, I’m not really sure why. I don’t think even Mr. K managed to convince himself with this character,. Jerome is sometimes found to be mocking himself within the text as if he almost doesn’t even believe how good he is himself.

As ever, I enjoyed the ride. Stephen King always sets things up beautifully and is never afraid to make his characters bleed. I may not have thought this one was his very best but then I never needed it to be.

Just keep doing what you do, Mr. K, I’ll be here waiting, along with all the rest.

I really want to see this movie too, based on one scene where a vinyl record is played. I must make time to do that.

I watched the film a while ago and remember enjoying it. Didn’t do any research before or after so I was surprised to find out it was filmed in the States but all credit to the filmmakers. I like quirky films like this. I can see why it was compared to Let The Right One In but that’s just because we have this obsessive need to turn everything into a simile. I’m guilty of it too. So few things are allowed to be their own things. I wonder who Dalí was compared to in the day. Or Brautigan? If you like different might I suggest you check out the mockumentary What We Do in the Shadows or Neil Jordan’s Byzantium which was filmed in the seaside resort of Hastings. Oddly I’m not a huge fan of vampire films and yet I do seem to have seen an awful lot of them over the years. What does kind of piss me off these days in the fact that the rules change from film to film. There was a time when crucifixes, garlic, wooden stakes and sunlight did the trick and no one sparkled. Now they make it up as they go along.

As for the King, as I think I’ve said before the only book I’ve ever read by him was his rather good book On Writing. Like the later Bond films I’ve never especially avoided reading him but I’ve always found myself with something I’d prefer to read. I have seen a good few film and television adaptations over the years. He’s a bit hit and miss but Dolores Claiborne stands out.