Two Versions of Not Submitting 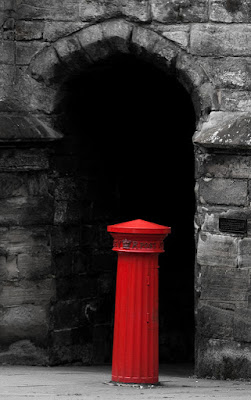 This week, I was getting a writing thing ready for submission to another writing thing. You can sense we’re not going to get too specific here. I put a lot of time into it, writing, rewriting, editing, honing, thinking, shaking my head, rethinking, polishing and drinking tea. I finished the thing on schedule and it sat there on my computer, gleaming in its preparedness, ready to be dispatched.

And then I didn’t submit it.

So it’s still sitting there, still gleaming in its preparedness although now there’s a kind of subtle taunt built into it too. “Chick-Chick-Chicken, you did all the work and then you chickened out.”

There could be a bit of truth in that. I’m honestly not sure. Self confidence, for me at least, comes in waves. The good parts are right up there on the peaks while the other stuff lies waiting down in the troughs. Maybe the old self-confidence wasn’t as high as it sometimes is when the time came to submit last week. Maybe the battle of inner voices was won over by that dull insistent one who reckons you’re just a bit shit really.

It could be that, it really could, but I think not. Maybe I’m simply guilty of post-rationalisation but again… nope, 'don’t think so.

Here’s what I think.

I think there is quite a few ways of ‘not submitting’ and I think I actually did two of them last week.

In earlier times, I used to read scripts for a number of competitions. Mostly these were radio plays. I would get lovely big packages in the post with twenty or twenty-five play scripts in them and I would have to read them, write a little report, and select maybe two of those scripts to go on to the next stage of reading. I enjoyed it. I found I could learn a lot, particularly about how not to do things.

At first glance, it may sound like a reasonably skillful job, requiring years of experience and knowledge. I’ll let you in on a little secret, if you don’t know it already. It’s easy to spot to best ones. Just that. It’s easy-as-hell to spot the best ones. I reckon anyone could do it. We all love a good story. We all love to be gripped, We all love truth and emotion, wrapped up in a winning package, and we can all spot it when we see it. I never had any problem finding the best two plays out of my stack of twenty-five. They shone out. There was never any mistaking them.

What’s this got to do with anything, Ken? Have you veered off on another of those tangents of yours? Is it an inevitable symptom of your age?

No, none of the above. At least I don’t think so.

The simple fact is, the thing I had written and rewritten and polished… it just wasn’t good enough to send. That’s the truth of the matter. That’s why the email never flew. It was okay, maybe, but it was not good enough.

And this is a lesson that’s been hard learned. It’s knowledge gained from first hand experience and from having an opportunity to operate inside the system for a little while. It’s the knowing that submitting your writing is not like buying a raffle ticket or entering a tombola. It’s no use telling yourself that you might win if you can only get something in, get anything in. It’s not the case. ‘Never was, ‘never will be. If your writing does not shine greater than the rest then it won’t progress. So many of the scripts I read were clearly ‘raffle tickets’, a scrap of paper sent in with the writer’s name on it in the hope of getting lucky, of slipping through.

A total waste of time.

I know this well, I really do, but there is a tendency to forget it or, at least, to shove it to the back of my mind. Maybe this thing I’ve written is a little better than I think it is. Maybe I should just send it away, take a punt on it.

This is a way of thinking that we can all fall into from time to time.

But I won’t submit to it.

I’m terrible when it comes to sending stuff out and like you there are numerous reasons why I don’t. Self-doubt looms large. One of the biggest problems I’ve found—I’m thinking more about magazines here rather than competitions—is finding a place that’s the right fit. You’ve probably seen it yourself, the advice editors give, and invariably on the list is: Read a copy of the magazine you’re submitting to. I used to think this was just a ploy to sell copies and I do suppose that’s a part of it but I can also see the sense too as many magazines do specialise and yet here’s the thing, I’ve yet to read any magazine and think, I know what poem would be perfect for them. It just never happens. I send off a bundle, usually the maximum allowed, and they never—I could put money on it—they never pick the one I would’ve had I been faced with that group. I remember sending some poems to a science fiction journal and they ended up publishing one called ‘Scars’ which wasn’t remotely sci-fi.

For years I’ve thought about submitting my novels to traditional publishers but apart from at the very start when I tested the water with Living with the Truth I’ve always given up before I got started. I’ve saved names of publishers and literary agents thinking I’ll get round to it but I never do and lose the notes. The guidelines are much the same when it comes to publishers and agents: Look at who they’re publishing or representing. And I do but I’ve never found one where I thought they’d jump at my stuff. I know full well my stuff is publishable—I read enough to know full well what does get accepted—but then I think about why agents and publishers exist and that’s to make money and I just don’t see enough of the general public getting excited over my stuff.

As far as you deciding not to send out the piece you’ve been working on all I can say is that we’re really not the best judges of our own work. As I’m writing this I’m listening to an album of Gershwin overtures and I’m reminded of Woody Allen’s film Manhatten. In an interview in May 2016 he said, “When I made Manhattan and saw it, I was very disappointed at the time. And I spoke to Arthur Krim [the head of United Artists] and said, ‘If you don't put this film out, I will make a film for you for nothing.’” Manhattan was nominated for two Oscars and won a BAFTA for Best Film. It was also placed on the US National Film Registry after America’s Library of Congress deemed it to have cultural significance. Its success clearly hasn’t changed his mind.

I haven’t completed a poem in about a year and a half. Part of the problem was the amount of time I spent working on The More Things Change but even those scraps I did write I rejected out of hand whereas once I would’ve been delighted with them. That’s a problem too. Not all art is great art. Not all art has to be great art. Then again when I finished the first draft of The More Things Change I thought it was great art and, yes, it was a decent book but it wasn’t great. Now it’s clever but I’m not sure if clever equals great, whatever ‘great’ is anyway.

For me the hardest thing is getting that first draft done. Well, now you have a decent first draft. Stick it in the proverbial drawer and do your damnedest to forget about it. I left The More Things Change to stew for twelve years and a good thing too: a much better writer finished it than the cocky bastard who started it.

It's good advice, Jim, and thanks for it. Perhaps the self-confidence is not what it was or sometimes still is. Maybe that's at the back of it and the rest is just putting on a verbal show. Not sure... I'll keep writing. I still seem to have a feel for when I've done something okay - those shitty little short stories of mine for instance.

Do me a favour. Write a poem. Write a little batch of em. Make it a mission, an experiment. You're different to the person who wrote the last batch and I, for one, would be interested to see what might come out.