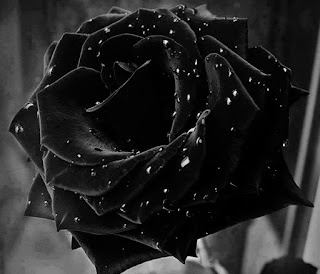 This week, for a change,  I decided to write a little story. But about what? I went back to an interesting blog that I visit from time to time called ‘Prompted Tales’. Every month, nine writers each submit a new story based on a common prompt. Two of my friends, William Gallagher and Angela Gallagher, write there.
Here’s the link. Have a look. It’s pretty good.

I decided to randomly pick one of their monthly prompts and randomly write something about that. Just for fun. The prompt I landed on was from April of this year. The word was ‘Fool’.  Here’s what came out.

The notice I put in the paper had clearly said ‘No Flowers’ but most of the buggers had turned up with wreaths anyway. The grave was garlanded with them now. That’s a real word, isn't it? ‘Garlanded’. The grave was ‘Garlanded’, as if Dead Judy herself had crawled out of her own cold tomb to mouth some mournful dirge right there at the graveside. That would have been something to see.  Something better than all these damn flowers anyway.

You could tell who most of the flowers were from because they mostly spelled words that gave clues to who had bought them. ‘Chazz’ or ‘Pal’ or ‘Workmate’. ‘Workmate’, for fuck’s sake. That, right there, was a supreme waste of flowers if ever there was one.

At least the unruly pile of wreaths hid the rocks and clay beneath. As for the Astroturf draped over it. Was there ever anything that bleated ‘Funeral’ more overtly than poorly-draped and overworked Astroturf?

They were all hanging at the cemetery gates now. The remnants of the funeral party. Hanging around, waiting for me to buy them pints and a lunch in the local hotel. Let them wait. Maybe it might piss on them, if I hold out long enough.

I hadn’t been a model wife. Understatement of the century, right there. I had done some truly shitty things and I had also fucked around more than a mechanic on an hourly rate. He had known about it all, of course. My husband Charlie. I didn’t rub his nose in it or anything but he knew how the world turned. He should have done. He was a bloody copper, after all. I always had a good story whenever I came in late or didn’t come home at all. My excuses were always plausible and always well-researched and he never believed a word of any of them. Not one goddamned word.

I asked him about it once.

He smiled that Labrador-eyed smile, the same one that had driven me out of our flat and into town on more than one cold Saturday night.

Some of the wreaths didn’t spell anything at all. They were just flowers. You had to work harder with those ones. You had to stoop right down and read the little condensation-bubbled card in the cellophane cover that was attached to the wreath on one of those little green plastic stalks.

From Mary and John (Burns) x

All love from all at number thirty-seven.

“Eleanor.” Two of the boys had come up behind me. Full uniform. Hats and all.

“I’ll be along in a minute,” I said, making a show of continuing to read the damn cards, “Don’t fret. I’ll get the drinks in.”

I kept stooping and pretending to read.

“Charlie left a file. To be opened after his death. It has evidence. Proof.”

“The thing is, El. Sorry about this but you do not have to say anything but it may harm your defence if you do not mention when questioned something which you later rely on in court. Anything you do say may be given in evidence.”

I stayed stooped. “Are you boys shitting me?”

“He says you killed him, El. Says you did other things too. You’d better come along with us now.”

“In a minute. I just need to read a couple more of these cards.”

I worked my way through them. At last, I read the last card on the last wreath. I had to shift a few to get down to it. It was from Charlie. I knew the writing well enough.

In the car on the way to the station, there was another song about love and death playing on Oldies 107. A real old classic.

It was ‘He Stopped Loving Her Today’ by George Jones.

I wondered if maybe he’d asked them to play it.

Ha! Very good - I didn't see that one coming I was so engrossed in the storytelling.

You know—and you would know better than me—you’ve probably got enough of these for a book. You could call it Groanworthy Tales.

Love how you picked the songs. Such sadness and lonliness Ken. Brillant.