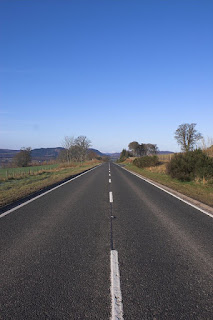 I still think it’s worth saying. Maybe one of you will pick up on it and try it and reap some benefit from it, as I have done. On the other hand, maybe you’ll never come by here again.

Sometimes, when I’m driving, I sing.

There. That’s it. Leave now, if you must. I’ll understand.

I don’t mean that I do it on short journeys, like down to the school and back. That would be just silly. I also don’t mean that I sing along with the radio like the entire rest of the world does, although I do that sometimes as well. What I mean is, on long journeys, if I’m by myself, there may well come a time when I will break into song and this may then go on for quite some time.

I do the other things as well. I listen to the radio and I like a good audio book and, in the last while, some podcasts have been life savers on long repeated journeys from there to here. It’s just, sometimes, in the mid-hours of the run, it all gets a bit same-ey and uninspiring.

It’s funny. It’s never a conscious decision. I never say, “Right, let’s turn off the old radio and get a little one man choral action going in this here vehicle.” That never happens. I just suddenly sort of find myself with the radio off and in the middle of some song.

It’s worth mentioning here that I am by no means a good singer. I can hold a tune, I think, but I have a low register, rather guttural, sort of ‘man-singing’ action that nobody will want to sit and listen to for very long. I’d be one of those guys who reckons his ideal song is Lee Marvin singing ‘I Was Born Under a Wandrin’ Star’. You know what I mean. It’s not ‘An Evening With at the Royal Albert Hall’ material.

Why do I sing? Oddly, I think it goes directly to my love of words and lyrics. I have a very good memory for the words of songs, they stay in my brain like most other things don’t. I like to run through the lyrics of my favourite songs and they just don’t sound right unless they are accompanied with at least some semblance of the tune that goes with them.

I’m often trying to put my own arrangements on things too. Singing them in different ways. I like to sing 'Rainbow Connection' is a world-weary Tom Waits fashion that perks up a bit in the final verse. I like to try to do ‘Try to Remember’ in a speedy ‘get through it fast’ version which undermines most of the over-reverential versions which exist in the world. I like to sing 'You Left Me Just When I needed You Most' as the saddest song in the world, which it pretty much is.

But that’s just three songs and I have loads. As the old gag goes, I have a vast abattoir of songs to choose from.

So what do I sing? All kinds of everything. No, not the Dana Eurovision winner, I mean_ well, you know what I mean. I sing Tom Waits (Shiver Me Timbers, Yesterday is Here), Bob Dylan (If You See Her Say Hello, John Wesley Harding) John Prine (Please Don’t Bury Me, The Frying Pan), Leonard Cohen (Bird on the Wire, The Master Song). Being Irish I also know lots of incredibly long ballads and I like to run through some of those. Things like ‘Arthur McBride’, Lakes of Pontchartrain, and Little Musgrave. I sing 'The Rocky Road to Dublin' with some feeling. I’ve also grown to like quite a few musicals so some of those numbers slip in sometimes too. There’s ‘Younger Than Springtime’ from South Pacific, ‘Somewhere’ from West Side Story and ‘Maybe This Time’ from Cabaret except sung in a more manly way.

But it could be anything. It could be Sinatra or Presley, Beatles, Bee Gees, Led Zepplin… oh, I do ‘This Guy’s in Love with You’ in Burt Bacharach fashion but it gets a bit high for me in the middle and I have to drop down a bit. Nobody’s listening so it’s okay.

Why bother telling you this? (I’m asking a lot of questions this week). Who knows, maybe you’ll read this and try it yourself. Maybe you’ll like it. It can lighten a mood when things are tricky and, at the very least, it can help you revisit the lyrics of your favourite songs and appreciate them just a little bit more.

Go on. Kill that radio.

Now this is where you and I are different. Actually I suspect we’re more different than similar in most ways but that’s a subject for another day. I was in the choir at school so, technically, I can sing when I put my mind to it but it doesn’t hurt to be surrounded by two dozen others to drown me out when I get it wrong; I have a terrible habit of pitching in a semitone below everyone else. I wasn’t in the choir for long but it is one of those things that I can honestly say that I have done. And I have sung in a car. I think more than once but I can only remember the once and it was a short trip, about long enough to play ‘I Didn’t Start the Fire’ which at one time I did know most of the lyrics to, those I could make out. And this is where my problem lies because I had a terrible memory for lyrics, even before my current memory problems. Songs I’ve listened to hundreds upon hundreds of time—Dark Side of the Moon is a perfect example—I could not sing. I might manage the opening verse or the chorus but somewhere along the line I’d get stuck; I’m trying to remember ‘Money’ just now and I couldn’t tell you the first line. Even with the track playing in the background I’ll forget bits. I sometimes sang at my desk at work back in the eighties if you can believe that. I can remember singing Billy Connolly’s version of ‘Two Little Boys’ and something else by him but that’s it and I’ve no idea why I started. (BTW if you’ve never listed to Raw Meat for the Balcony do. It’s not available on CD—well it wasn’t the last time I looked (Carrie found me the tape)—but it’s brilliant. I used to own the LP. When I got a bank loan to furnish my first flat the first thing I bought—from Boots the Chemists of all places—was Raw Meat for the Balcony. What every new home needs.

I don’t have a car now and haven’t had for about twenty years so I don’t go on short trips let alone long ones but that wasn’t always the case. For a while I had a delivery job—delivering sun tan lotion of all things—and my territory was the whole of Scotland and the north of England. The van didn’t have a tape player but I did have a ghetto blaster and I loved the driving. I have very clear memories of sitting on Princes Street in Edinburgh in the middle of summer with the windows down and AC/DC’s Highway to Hell up full bung. But I have no memories of singing along to it or to anything else. I do recall having a crack at ‘Born in the USA’ in my parents’ front room but that’s the only time I can remember singing indoors.

I sometimes sing wandering round the house. Well, not really singing. More bumpy-bumping. And I drum a lot especially when I’m sitting at my office PC, variations on the opening to Game of Thrones or something like that. I like theme tunes (I think we’ve talked about this before) and I’m sorry to see they’re not as popular as they once were although I sense a comeback with shows like House of Cards and The Newsroom.